Marcia Kester Doyle refused to believe that she’d ever end up one of “those women” standing under the fan at the party … we’ll see how that turned out. Read more from Marcia on her blog, Menopausal Mom.

When I was in middle school and heard my mother and her friends discussing hot flashes, I thought it was something scandalous. The word “hot flash” implied many things to me when I was young. A flash of great heat caused by what? Sex? Anger? Fever from the flu? In my hormonal thirteen-year-old mind, I was convinced that it meant flashes of heated sex. Is it any wonder that I cringed whenever I heard these older women discussing their hot flashes? 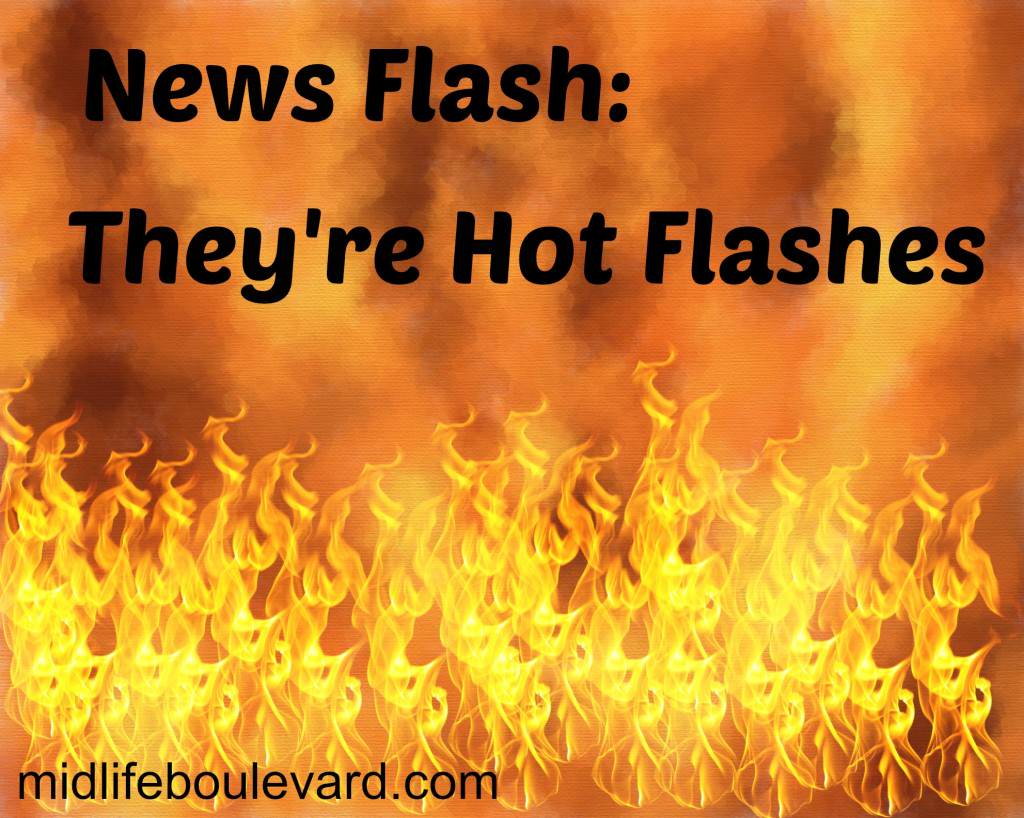 By the time I was in my early twenties, I had a vague idea of what hot flashes were, but I believed that it was only a problem that concerned women who were older than dinosaurs. These were the same women who clustered under ceiling fans at parties and who swiped all the dinner napkins off the table to mop their sweaty brows. Surely this would NEVER happen to me.

Fast-forward thirty years to when my electric bills started soaring through the roof. The kids complained so much about the sub-zero temperature of the house that they finally had to don heavy wool sweaters to keep their teeth from chattering at the dinner table.

“What do you mean it’s cold in the house?” I asked while fanning my face with two hands. “It feels like the damn Sahara Desert in here!” I was certain that the earth had moved closer to the sun, or that it had everything to do with global warming and absolutely nothing to do with the fact that I turned fifty.

I remember my very first hot flash. I was clearing off the dishes from dinner when I felt a hot, prickly sensation creep up the base of my neck. The heat spread down my arms and legs and left my hands feeling clammy. I ran over to the nearest air conditioning vent and waved my hand over it. “Honey, come quick!” I shouted. “Somebody broke the air conditioner!” My husband assured me the house was quite cool. Impossible! I checked the thermostat, even tapped on the glass a few times in disbelief. Seventy-five degrees? It had to be incorrect. It felt more like ninety-five.

And just like that, the hot sensations left my body and once again I felt cool, calm and collected. Except that there were beads of perspiration across my forehead and upper lip. What the hell? I figured it had to be some kind of weird body malfunction and went about my business.

For several months, I experienced unpredictable bursts of heat that sometimes occurred during inappropriate times, but I was in denial, convinced that the whole world had gone mad when it came to indoor cooling systems. I refused to become one of those women who carry a large roll of paper towels stuffed into a purse the size of a suitcase.

The nights were even worse, and sleep was nearly impossible. Sheets on, sheets off. Freezing one moment, soaking the sheets the next. Even my dreams became weird. Instead of dreaming about hot guys, I was dreaming about hot fudge sundaes.

At a recent party, I realized I could no longer ignore the signs that I was indeed experiencing menopausal hot flashes. I was just like all those dinosaurs in my mother’s living room so very long ago.  After two (or was it three?) glasses of Pinot Grigio, I began to perspire as though someone had turned the sun up a notch, all those bright rays searing through my skin.

I tried discreetly to maneuver my sweaty body under the wobbly ceiling fan but somebody beat me to it…a woman swiping her brow with a thick layer of paper towels. I recognized the tell-tale signs of a female in the throes of a hot flash: flushed cheeks, limp shirt sticking to her skin, moisture trickling down her temples, eyeliner melting off eyelids (causing that classic “startled raccoon” look), and the rapid waving of a paper plate in front of her face.

I had met a kindred spirit.

The woman informed me that wine increased the frequency and intensity of hot flashes, which explained why she wasn’t drinking anything stronger than a tumbler of ice water at a raucous party. Right then, I should have set my wine glass down, marched into the kitchen and wedged my head into the freezer until the hot flash disappeared. That would have been the smart thing to do…but I wasn’t feeling very smart.

Instead, I rummaged around the kitchen cabinets until I found a fishbowl-sized glass and emptied half a bottle of wine into it. Then I compensated by loading the rest of the goblet with ice.

Raising my glass, I toasted my new friends: the hot flash, the hot temper and the hot fudge sundae. Cheers to all my middle-aged mamas!

I enjoyed reading your story. It is very funny but truthful. I am also experiencing similar feelings, but I do hope it will not last for fourteen years. Beverley

When I was young they called menopause, 'the change' and I grew up fearing it. I'm 40 now and my family goes through 'the change' young so my time will come soon enough. My family also seems to have hot flashes for several years....I hope I don't take after them.

I hope you don't, either. 40 is awfully young to start going through the symptoms but I have heard of women who hit peri-menopause early.

I remember this one!

Always one of my favorites!

does that mean you burn more calories as well? ;)