When Susan Mulder started to feel her age catching up with her, she realized that there was no better time to complete her bucket list – starting with getting a tattoo. Read more from Susan on her blog.

I have been threatening for years to get a tattoo. I have wheedled my husband with the idea on multiple occasions, mostly to gauge his reaction. Which was negative. Every time. Emphatically. This didn’t stop me. As I inch closer to the big five-oh mark, I keep thinking of the items on my secret list of things I want to accomplish in my lifetime, which range from visiting Idaho (weird, I know but I’ve always wanted to go there) to toasting my 50th wedding anniversary and dancing at my grandchildren’s weddings. 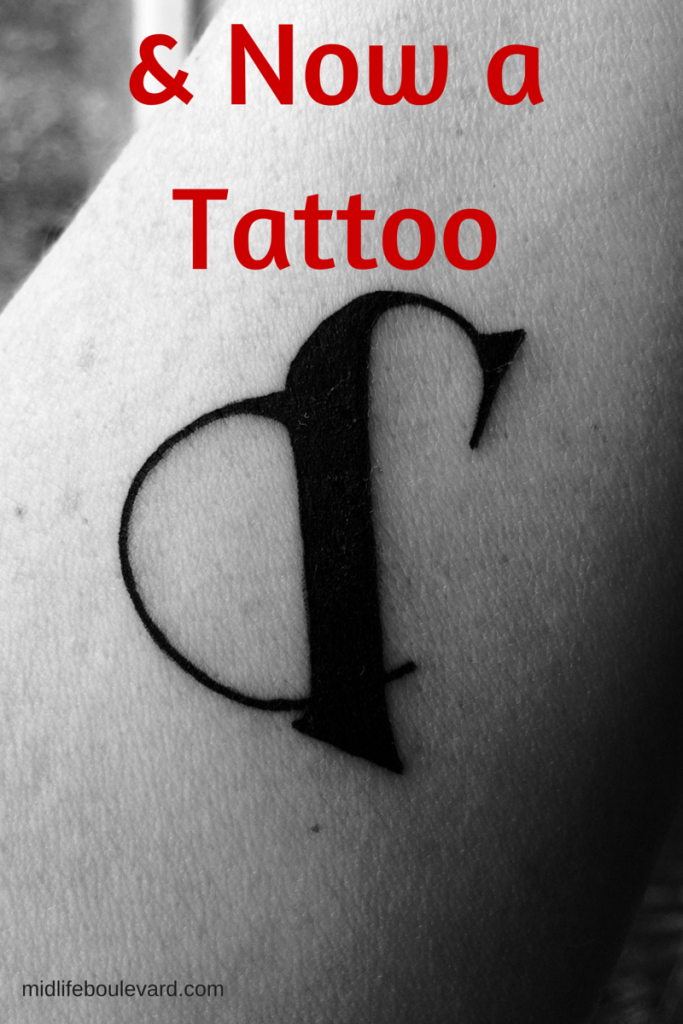 There is something so decisive – some would say brave – about not backing down when that last minute hesitation taps you on the shoulder or overhearing the odd conversation that the person behind the counter was having with a client on the phone (which I am pretty sure involved piercing said client’s scrotum.)

I did it. With no fanfare, no one there to hold my hand or talk me out of it – I knew what I wanted and just did it. Scary? Uh, yeah. And do I like it? Yes. Do I regret it? Possibly. What I discovered is that this wasn’t about being brave, living life to the fullest or even the desire to get a tattoo.

As the tattoo artist was finishing up, to lighten the mood, he said, “There’s nothing to worry about, it’s only permanent.” To which I fired back, without missing a step, “I have scars and stretch marks that are permanent but this was something I could choose.” Boom. In that instant it made sense. This was no coming of middle-age, no proving to myself that I too can be brave or that I am just that cool. This was about control.

When I look in the mirror, I see all sorts of things happening to me that I can’t control. The southernly migration of my breasts, chin and rear end are just the beginning of that list. I did choose to let my hair go gray-which I will defend and celebrate as a very good choice. Alas, it is a choice that screams moth balls, warm socks and insignificance better than using a megaphone. Menopause is another thing on this wrinkling list that I cannot control. The hormonal fluctuations alone can leave me breathless-but that could be early onset arterial sclerosis too. But I am pretty sure that the post, post, post adolescent angst that has taken hold is the fault in my genes and gender and just one more thing I can’t control.

One more thing that I can’t control? The reactions I am going to get. To my husband’s credit, he recognized my fragile state, put his arms around me and let me know it was OK, and that it is part of who I am. He could have stopped there but added that seeing I was upset, he was afraid I had wrecked the car. Not sure what to do with that yet. As for my kids, I am slowly building the courage to tell them all. And the in-laws, friends and others that will think I have gone off the deep end. You know that thing we warned our kids about? Consequences? Funny that it doesn’t feel much different at nearly fifty than it did when I was nearly twenty.

As for the tat, I thought that if I ever had the cojones to get one it would either be a dash (-) or an ampersand (&). I like the idea of the dash because of what it represents.  It’s the little mark in between the year you were born and the year you die and all of your experiences, loves, losses, highs, lows and everything in between are held in that little mark.  There are two problems with it-it’s a little line, pretty boring for a tattoo and could look like a mistake. Plus, it is finite. There is a beginning and an end. The ampersand, on the other hand, apart from being more visually interesting than a dash-is a whole lot more. It implies that there is more, it’s the “and then what happened?” It’s the and then what happened because, something always comes after an ampersand. I went with the ampersand.

P.S: Here’s the conversation I had with my son when I told him what I’d done:

Me:  Ok, so I have joked for years about getting a tattoo and I decided to go get one yesterday-went with a dragon on my left shin…
Loooooooooooong air silence
Me again:  Well this is really what I went with...
Pic of tat
Son: nice
Son again: I have a cream for that.
Ah, familial support 🙂

I’m an artist, maker, writer and general life lover. I do my best to take from lessons I’ve learned along the way to create something good. I left my dream job-something I had worked hard for-with nothing more than a belief it was the right time/right thing to do to pursue whatever it is I am really meant to do. At home you can find me making snarky comments and general commentary around my husband's shenanigans and searching for the perfect GF bread recipe-which is kinda like an alien- ya can’t see it but you know it’s out there…

I’m an artist, maker, writer and general life lover. I do my best to take from lessons I’ve learned along the way to create something good. I left my dream job-something I had worked hard for-with nothing more than a belief it was the right time/right thing to do to pursue whatever it is I am really meant to do. At home you can find me making snarky comments and general commentary around my husband's shenanigans and searching for the perfect GF bread recipe-which is kinda like an alien- ya can’t see it but you know it’s out there…

I love your tattoo. Our surviving son has magnificent tattoos, he taught us that his ink tells his story. I have been considering a tattoo since our eldest son was killed. I have many allergies, so have been hesitant to push my immune system with ink. But I think of it everyday, perhaps in the fall. Thank you for sharing your story, it has me thinking again!

Thank you for sharing! It's been interesting having a tattoo at "such an age"-I still love it and perhaps more than I did when I first got it! It has opened up conversations I might never have had and serves as a daily reminder to stay focussed. By the way, I have several sensitivities and allergies but have had no reaction-which surprised me. I recommend a chat with your physician before you get one just to be safe. I may feel differently when I am eighty but for now I have no regrets :).

Nice ink! I like tattoos usually. I have two and I'm planning on getting matching small anchor tats with Hubby. I would never put anyone's name on my body except my daughter's, which also might happen in the future, as the roots of a tree. I love the ampersand and its significance in your life and I'm so happy for you that you are now wearing these feelings on the outside of your body. It really IS about control. I've read that tattoos are a way of wearing our emotional scars on the outside of our body, and that kinda makes sense to me.

Thanks! It's strange how a simple thing like a tattoo (well, maybe not so simple) can totally realign how you think about and perceive personal experience. It is one of the best things I've done for myself!

I'm proud of you. For not succumbing to the pressure. For identifying why you wanted it so badly. And most of all, for finding deep meaning in an ampersand. I think I've found a kindred.

Lisha, thank you! It is a daily reminder that my story continues AND that it is a good one :D

Loved this post. I never, ever wanted a tattoo until about two years ago when I started drawing a circle on my wrist every day with a Sharpie as a reminder to stop doing the same ol' crap. When I mentioned the idea of a tattoo to my husband, he sort of cringed so I let it go. But your story, the control piece, it's speaking to me...

Kaly I love the idea of the circle! I can just see it :) I drew ampersands on my forearm for ages and the fact that I continued to do it told me that I needed to just go forward. An interesting note-when I showed it to a close friend for the first time she said it looked like it had always been there....

Susan, I love this post so much! Finding myself in a very similar place, having been considering a tattoo for several years. I adore the idea of the permanence and the symbolism, which would be so personal and special to me. Your post provided me with even more encouragement to make this decision. :)

I am SO glad you found some encouragement!

Laundry. It’s a dirty job and someone (most likely you) has to do it. I do almost all the laundry...