I recently lost one of my favorite rings. A “mothers ring,” it was called: a band of studded white gold with a small, peridot gemstone in the setting. The peridot is the birthstone for August, the month that my son was born. I wore it on my right hand every single day for the last 17 years, along with a second, identical ring, except for the aquamarine gemstone in the setting, which is the birthstone for March, the month that my daughter was born. 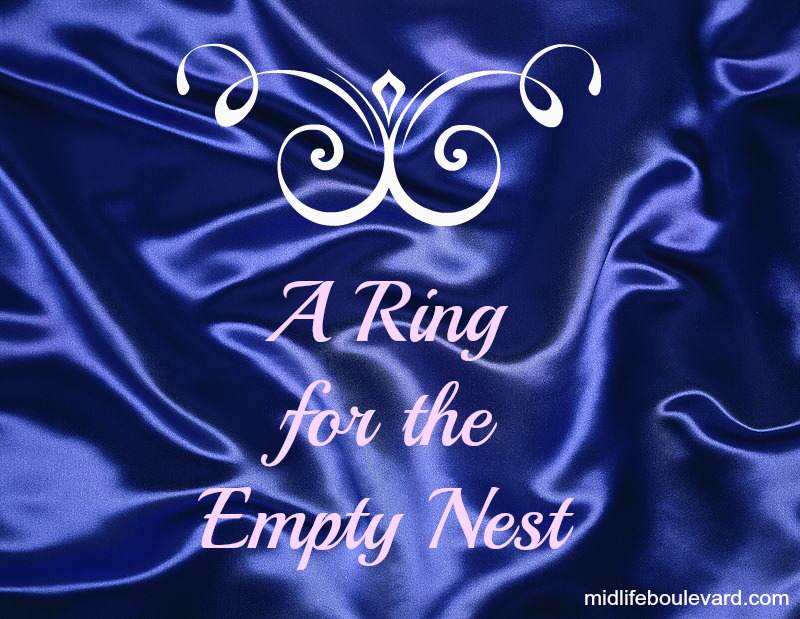 The rings were handmade by a jeweler in Texas when my children were very young. I cherished those bands of gold and I loved how they looked on my hand. I wore them as a celebration of my children and of motherhood. And then one day this spring, I looked down at my hand, and the peridot ring was gone. It had slipped off of my finger without me even noticing. It was a strange thing to happen after all of these years. The ring had remained snug and safe on my hand through all of the rough and tumble years of child-rearing, and then as if on cue, it quietly slipped away. For a while, I continued to wear just the one ring, my daughter’s birthstone, but it didn’t feel or look right without the peridot by its side.

“Maybe it’s a sign,” my son said to me with a grin. He knew that his old mom had been working hard at letting go. He knew that I had been preparing myself for the empty nest, which will be here in three short weeks, when he goes away to college. He understood, at least in some vague way, that I have been reclaiming parts of myself, pieces that went underground during the intense mothering years. Years when I needed to focus most of my energies on raising him and his sister; years when I had to put aside some of my own creativity, ambitions, wants and needs. I guess its called sacrifice. It’s what we do for our kids and it is good. It has meaning and it takes us out of our own small selves.

I was devastated by the loss of the ring. I tracked down the jewelers in Texas and asked them if they could make me another one. I even sent them a photo of the ring that I still have, my daughter’s birthstone, so that they could match the two, just like they did when my kids were small.

But then, I discovered an old ring in the back of my jewelry drawer: a band of yellow gold with a beautiful diamond-shaped garnet in the setting. The garnet is the birthstone for January, the month that I was born. My mother gave it to me when I was in my 20s, before I had children, before I was a mother. I had forgotten about it. I had even just about forgotten that the garnet is my birthstone or that I even have a birthstone.

A few days after I found the garnet my husband asked, “So, did you get in touch with the jewelers in Texas?”
“Yeah,” I sighed.
He waited for me to continue, and when I didn’t, he probed further. “Well, are you gonna order the mothers ring?”
“Nah, I don’t think so.” I told him.

I let a few minutes pass, for dramatic effect. And then I said, “I’m really liking the look of this garnet on my hand.” I held my right hand out for him to see. “I think I found it for a reason. I think it’s here to remind me of something. I think it is reminding me of me.”

My husband is used to me talking like this, so he kindly smiled and nodded his head in agreement.

Until, of course, it is time for a grandmothers ring.

Read more from Amy Ruhlin on her blog, The View At Midlife

Amy Ruhlin is a former Speech-Language Therapist. She has two grown children and one sweet husband. Her essays have been published in The Huffington Post, BetterAfter50, High50 and LivingBetter50. You can find her at <a href="http://www.theviewatmidlife.com">The View at Midlife</a>.

Amy, such a lovely post and very symbolic of the role we assign to motherhood in our lives. I hope to be brave like you when we drop our daughter, our youngest, at college next fall.

Why not still get the ring replaced and have all three, with the two original ones on the one finger and your "new" garnet on another? Just going for the jewelry gusto here!

Ah...awaiting the grandmother's ring! I would have to have a few, we have 10 grandchildren.

I lost one stone from my Mother's ring many years ago and stopped wearing it. I was, like you, considering having it repaired and then...decided that with grown children, having their own children, I had morphed into a women with my own life to live. Very similar to your awakening here. It's just another phase and a reminder that we did indeed raise our children to be good adults who still love and need their mom, but in a whole new and wonderful way.

Welcome to the Club.

Amy this was beautifully written. And such a symbolic story of letting go. My son Rob, his senior year, wrote one of those horrible college essays that they all have to write. On me. What he said about me I will never forget. He said, "The best thing my mom is giving me this year is that she is letting me go". Or something like that. I am probably embellishing it a bit. But that was the gist. Good for you. Good for us! I will look forward to reading more of your writing!

Love this! I love the symbolism...Thanks for reminding me that every situation can be turned around for growth.

A couple of weeks ago Thom and I had lunch with a long time friend I’ll call Bob.  After a...