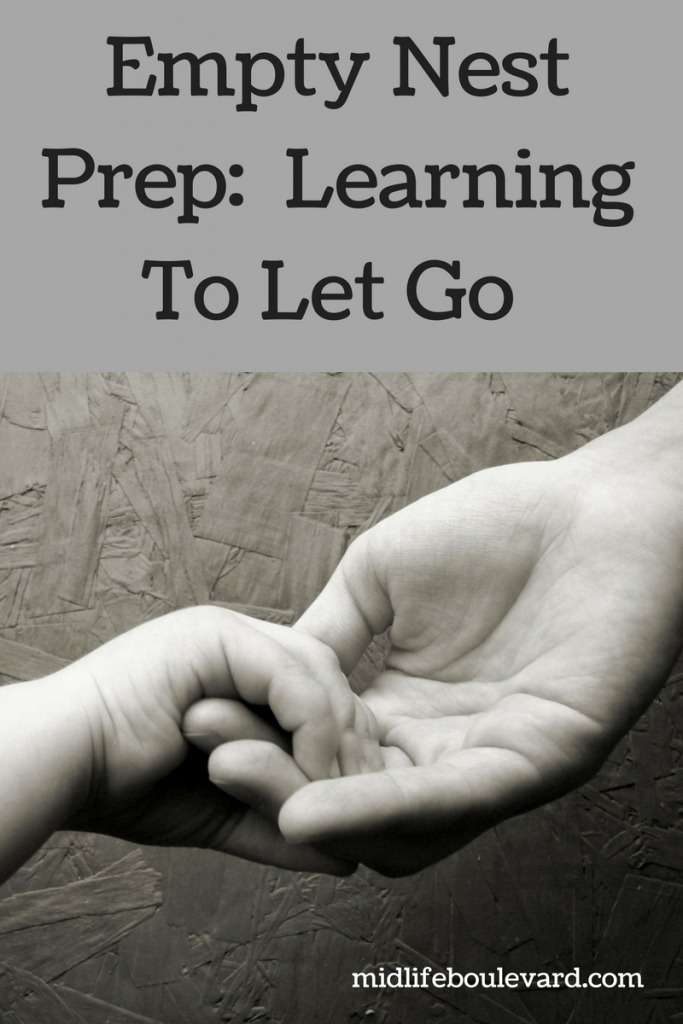 HOW WILL YOU FILL THE HOLE?

One of the hardest lessons for a parent to learn is how to let go of our children. We have invested so much of ourselves into them and they are such a huge part of our lives, what will we do when they leave? I’ve seen so many women suffer the agonies of the empty nest because they held on so tight and when the time came for their children to leave it was a huge wrench to their hearts and they were left with a gaping hole to fill. Many struggle to find something to fill that hole with. In fact I’ve seen it affect some women so badly that I’ve even coined a term for it – postnestal depression – similar to postnatal (postpartum) but caused by having children leave rather than having them arrive.

What we need to do is start to let our children go gradually. You need to have equipped them to leave the nest and to be able to survive and flourish on their own. They need to be able to cook and clean competently – if they choose to eat McDonald’s for every meal, that is up to them – but it should be by choice, not by necessity. They should also not need their mother cooking multitudes of meals for them to store in the freezer to feed themselves with each night – that is not independence. I know mothers who visit their adult children and clean their house or apartment for them – that is just not on! Why would anyone want to have their child so incapable as to need their mother to be their cleaning woman? Living in squalor may not be what we want for our kids, but if that’s what they choose, then so be it. Most landlords won’t stand for it, so they have to clean up for rent inspections at the very least. I’ve heard of uni students who never change their bed sheets – we might think that’s gross, but they’re big people and it’s up to them how they want to sleep.

LEARNING TO FIGHT THEIR OWN BATTLES

We also need to make sure that our children are articulate and self-sufficient enough to hold their own in the big wide world. Cosseting them and never expecting them to step outside their comfort zones means they never learn conflict resolution, or how to ensure they aren’t walked all over by more savvy, worldly-wise people. You can’t phone the complaints line for them indefinitely, sooner or later they need to do it for themselves. If they never leave the family home, they never learn to take care of themselves, whenever there is a crisis they throw their hands up in the air and expect to be rescued – not good!

PREPARING FOR AN EMPTY NEST

There is nothing sadder than seeing a midlife woman who is completely at a loss because her nestlings have flown and she hasn’t got anyone to mother anymore. Letting go needs to happen gradually over a period of time. We need to spend time away from our older children – let them stay at friends’ houses, with grandparents, at camps etc. We need to learn how to keep the connection alive with our partner so we have something to talk about when the kids aren’t around. We need to find new interests to fill our time and keep us engaged and interesting.

Understanding that your children will leave home and make a life for themselves and preparing them (and yourself) for that eventuality makes for a much smoother transition. Worrying about all the things that can go wrong, trying to make everything as easy as possible, not letting them struggle to find their feet – all these things lend themselves to dependency and disaster. In Australia we have a term “boomerang kids” which refers to young people who leave home, can’t cope for whatever reason and boomerang back home to be looked after by their parents.

We need to stop clinging to our children, instead we need to be encouraging them to take the risks that life offers. If they want to move out then help them make it happen, bring care packages as a treat – not as an expectation. Visit them and have them visit you – but not all the time. Don’t pay their bills for them, don’t keep them dependent on your largess, let them figure things out for themselves. Life is exciting and has so much to offer young people – don’t hold yours back because you are too scared to let them go.

I completely agree. Our son is still home because he commutes to grad school. But he does his own laundry, cooks many of his meals (he has a crazy schedule) and makes many of his own choices. When he does leave home I will miss him terribly but until that time comes I'll drink in whatever I can get when he isn't in school, working or out with friends. I know he'll be prepared for life and we'll be (pretty much) prepared for the empty nest. Wonderful post (again) Leanne!

Letting go is also recognizing that we're no longer in control and that we shouldn't even try to be. Once our kids are adults, we're still their parents but we're advisory accessories. Not easy to make the shift--especially when we don't like the decisions they're making. Too bad Dr. Spock didn't cover this in his bible on parenting..

I am in agreement! But if you need something to "mother", get a dog or two!

thanks so much for featuring me again - it makes all the lessons I learned about letting go seem more worthwhile if I get to share them with others :)

Where The Detours of Parenting Take Us

Laurie shares thoughts on growing up, growing older and growing (hopefully) wiser over at LaurieStoneWrites.com. You think you’ll feel one...