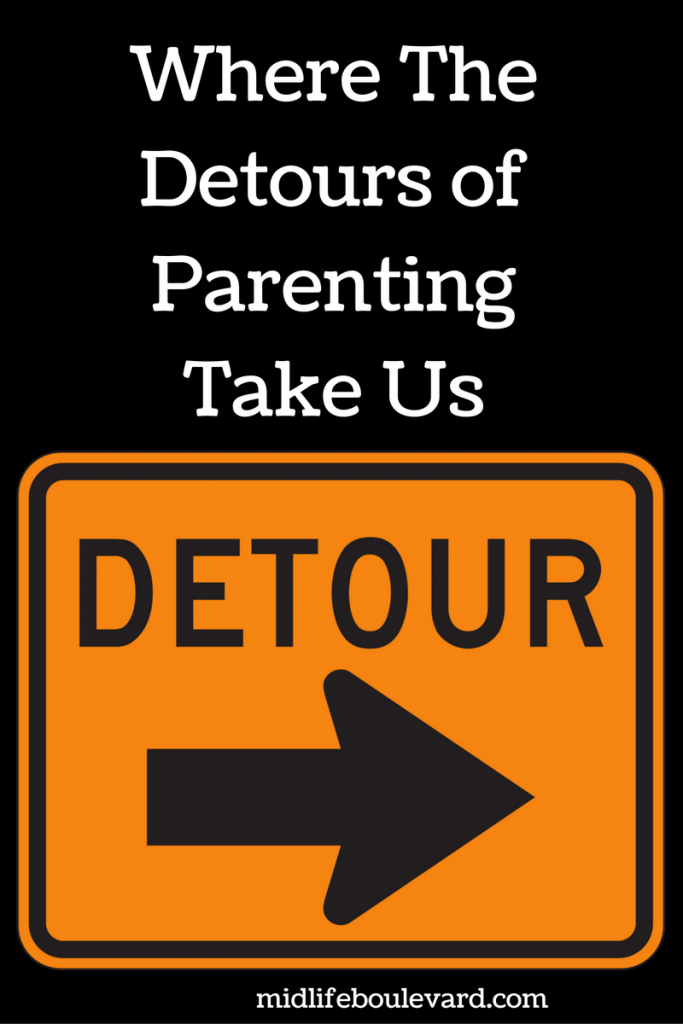 Laurie shares thoughts on growing up, growing older and growing (hopefully) wiser over at LaurieStoneWrites.com.

You think you’ll feel one way about something, but end up feeling another. My oldest son Patrick moved out recently. I expected to feel easy-going about it, ready. After all, he’s 25. It’s time. But I felt something different.

The sight of his empty room hit me harder than expected. All his furniture is gone except for this huge roadside “Detour” sign left over from high school. (I never did get the full story of how it made its way from the street to his bedroom).

Rock posters are still tacked to walls. Stray CDs, ancient sports trophies and hand-made clay bowls from elementary school line the shelves. A room once filled with my son’s sweet, solid presence is hushed and still.

I look around and realize I’ve come full circle.

Twenty-five years ago, I sat in a hospital bed after a rough and scary delivery. I felt weak, exhausted and scared. How would I ever summon the energy to care for an infant? A few days later, feeling better, I was switched to another, cheerier part of the maternity ward.

That sunny Saturday, my husband Randy and I were allowed to spend all day with our new son. He laid in his bassinet, wrapped in that pink and blue-striped hospital blanket, so calm and sweet.

For the first time, I was allowed to hold him as long as I wanted and even change his diaper. We fed him and cooed, marveling at all his baby perfections.

For Randy and me, it was our first, hard-won moments of parenthood. We gazed at this tiny infant, not knowing who he would be or what he would become. Ready or not, we were a family.

Twenty-five years later, we watch our oldest boy, now burly and bearded, drive down our driveway in a U-haul truck, his meager possessions in back.

I watch and can’t help think of that first Saturday we spent together in the hospital. This day is also a sunny Saturday. But unlike then, which was a beginning, today is an ending. The long, sweet time I lived with my oldest child is over.

A few minutes later, Randy and I find ourselves gazing at his empty room. I think of the greatest hits from this quarter century — Baby & Me groups, Barney the Dinosaur, soccer games, band jams, driving lessons, math tutors, graduations. How fast the weeks, months and years sped by.

And although a poignant interlude, I must confess something. Something else is going on. The greedy, reptilian part of my brain is starting to kick in. I see how this moment represents more than my son leaving home.

It also might mean a new chapter for me.

I turn to my husband. “What’s the equivalent of a Man Cave?”

He arches his eyebrows. “A Diva Den?”

I smile. I like it. In 36 years of marriage I’ve never had my own space. My husband would argue the whole house is mine. But that’s not the same.

Even though I’ve been happy to share our bedroom for 36 years, I’ve never had a “room of one’s own” to quote Virginia Wolfe. Unlike my husband and sons, I’ve had no place in the house I can shut the door and call mine.

This is exciting, I think, ideas starting to percolate. I desperately need a guest room, but what else? A desk for writing? A place to do yoga? Or listen to music? Or just veg? A private dance studio?

He and I start to leave when my eye catches on that “Detour” sign.

I debate whether to keep it and decide it will stay for now as a reminder. Detours make life interesting. Parenting detours, especially so.

I remember those young parents in that hospital room so long ago. We had no idea of the amazing, gratifying, and at times hair-raising journey ahead. We knew nothing of the detours that come with raising sons.

Patrick, too, had his own share of detours. Once allergic to classrooms, he’s now going for his Masters in Psychology, a field suited to his perceptive, empathetic nature. It’s a road he (nor we) could ever have predicted.

I close the door on that for-now-empty room and realize something else. I can’t deny a feeling that somehow Randy and I graduated. One kid launched. One to go. We can take a bow.

We not only survived, but learned and grew from this era that began in a sunlit hospital room… and ended with my bearded son and a U-Haul.

My daughter's room is now my yoga room and just this past summer she painted and re-decorated it to a more grown up style before leaving for her junior yr of college. She did the task (detour) for me! Pretty neat and now I will call it a Diva Den! Love that :). Hope you enjoy yours soon.

Thank you, Laurie. I love the idea of a yoga room. How nice of your daughter to decorate yours!

Since I do not have kids, I can't relate to these feelings, not even a little bit. But it's clear I missed something big and for that, I'm sorry!

Carol, I think the biggest thing (besides a new era in parenting) is having a space of my own for the first time in my marriage! I have to say, I love this little retreat. I've enjoyed decorating it and having it as my own domain. And don't be sorry. Life had other plans for you and judging by your writing and blog, they were important ones.

I sort of made the garage into a diva den, which for me is a yoga/meditation space. I love it so so much. It was so fun finding things I already owned to put it all together and I use it every morning!

Stephanie, I did the same thing! Our basement became a treasure trove of long-forgotten lamps and pictures that went perfect in my new room. Great minds think alike!

I feel your feelings Laurie! Congratulations to you and your husband, you did it-you graduated too! Enjoy your new "diva den".

Thanks so much, Lori! I'm already having fun decorating it.

Ha ha! I'm in the middle of painting my daughter's room to make it an exercise room. I agree there are mixed feelings but for me, mostly excitement of my new chapter and less responsibility in caring for another human being. I've declared my last year of my 40's "putting me first" of course that happened 2 months ago and I've only put myself first once. Sigh.

Julia, I think putting ourselves first takes practice, especially for women...especially for mothers. Sounds like you have an exciting new chapter planned!