I admit that on my last trip to Spain, I pretty much just drank sangria (and ate ice cream). This means I had no idea what wine I was drinking other than it was red. On my next trip to Spain, I hope to be a little more sophisticated, so I’ve done some preliminary research about the wine regions of Spain.

I often think of Spain as desert and mountains, so I was surprised to learn that Spain has more acres under grape vine cultivation than any country in the world. In 2013, thanks to a year of excellent weather conditions, Spain surpassed both France and Italy in wine production.

There are several Spanish micro-climates, so a wine tourist can visit vineyards with  diverse, picturesque landscapes scattered across the country. Each region has something unique to offer wine connoisseurs. On my first Spanish wine trip, I hope to visit several of these regions:

The region of La Rioja is located in mountainous central northern Spain, just south of the Basque region. Some refer to it as “Spain’s Tuscany”. From a wine perspective, it is divided into three regions, but all are known for rich, dry red wines.

There is archaeological evidence that Phoenicians first produced wine in La Rioja in the 11th century B.C., a tradition continued after the Roman conquest and through medieval times to the modern era.

La Rioja was the first Spanish wine region to be awarded special regulatory status in 1991 when it was officially recognized by the Spanish government as a premier wine region.  Its largest city is its capital Logroño from which one can arrange wine tours to lovely mountain hamlets. 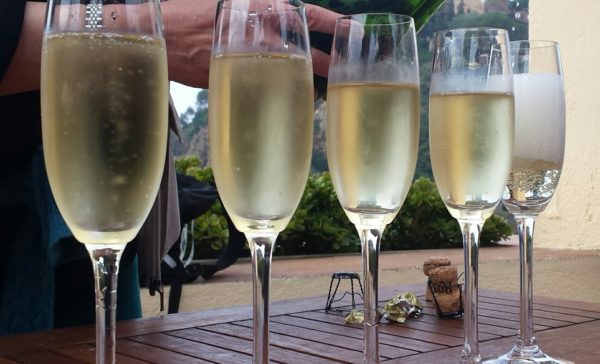 I was introduced to cold, sparkling cava on a visit to the Costa Brava in the Spanish province of Catalunya.

I wish I had started my wine research before my trip to the autonomous Spanish region of Catalunya. At least I was introduced to cava while there. Cava is a wine that is this region’s version of “champagne”. (I’m sure the vintners who produce cava would tell you that champagne is the French version of cava.) Cava reminded my untrained palate of the Italian sparkling wine, Prosecco.

I even tried cava sangria. Yum. 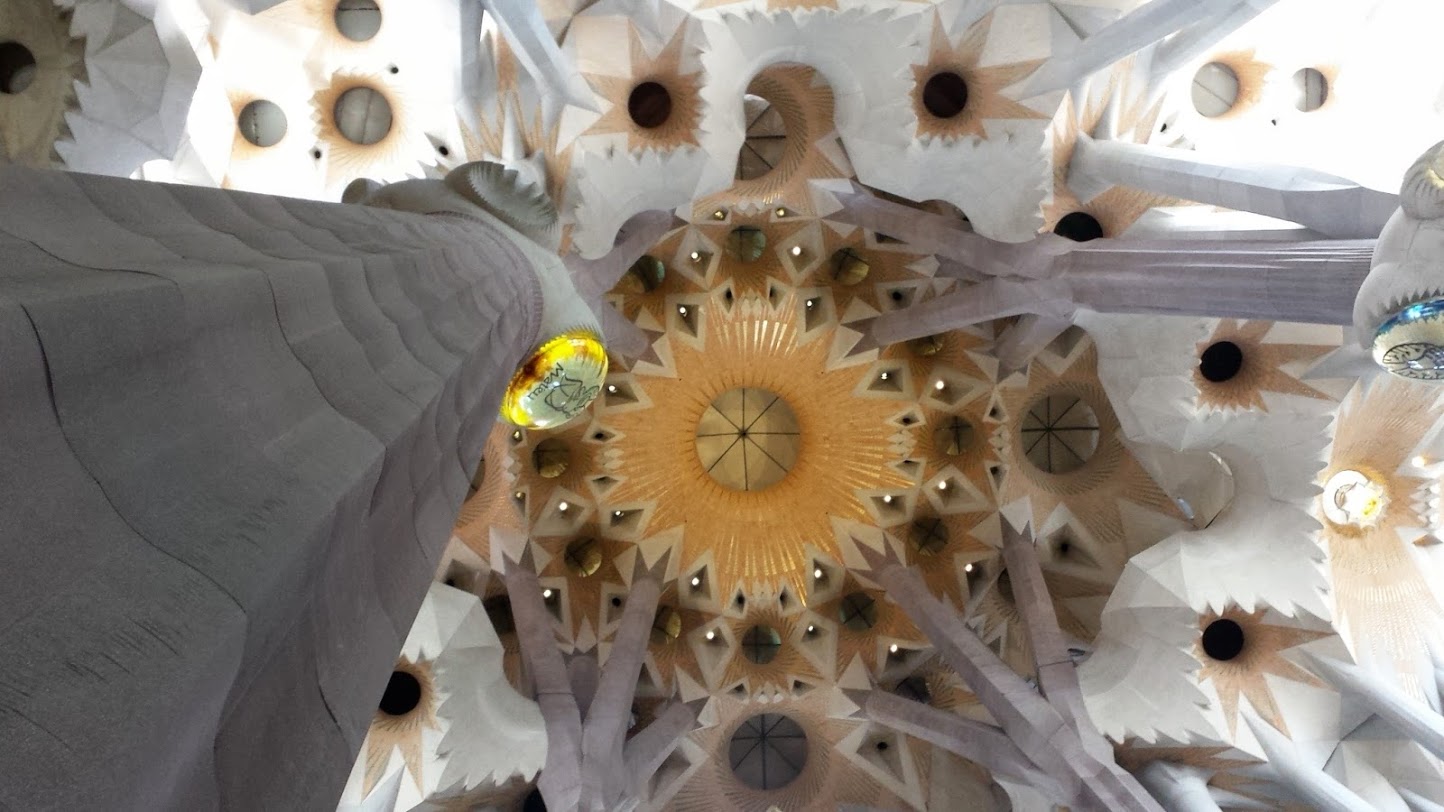 Barcelona is a good base from which to explore Catalunyan wineries. While there, be sure to visit architect Antoni Gaudi’s perennially unfinished Cathedral of the Sagrada Familia.

In Catalunya, you can visit Codorníu, a winery that produces this sparkling white wine. Codorníu started producing cava in 1551.  The Codorníu winery is located in Sant Sadurni d’Anoia, 50 kilometers west of one of my favorite cities in the world, Barcelona.

There are also some 59 other cava producers in the region which can be reached by train. Alternatively, one can easily book a day tour to the region from Barcelona to visit several cava wineries. Tours of Codorníu have stellar reviews on TripAdvisor. 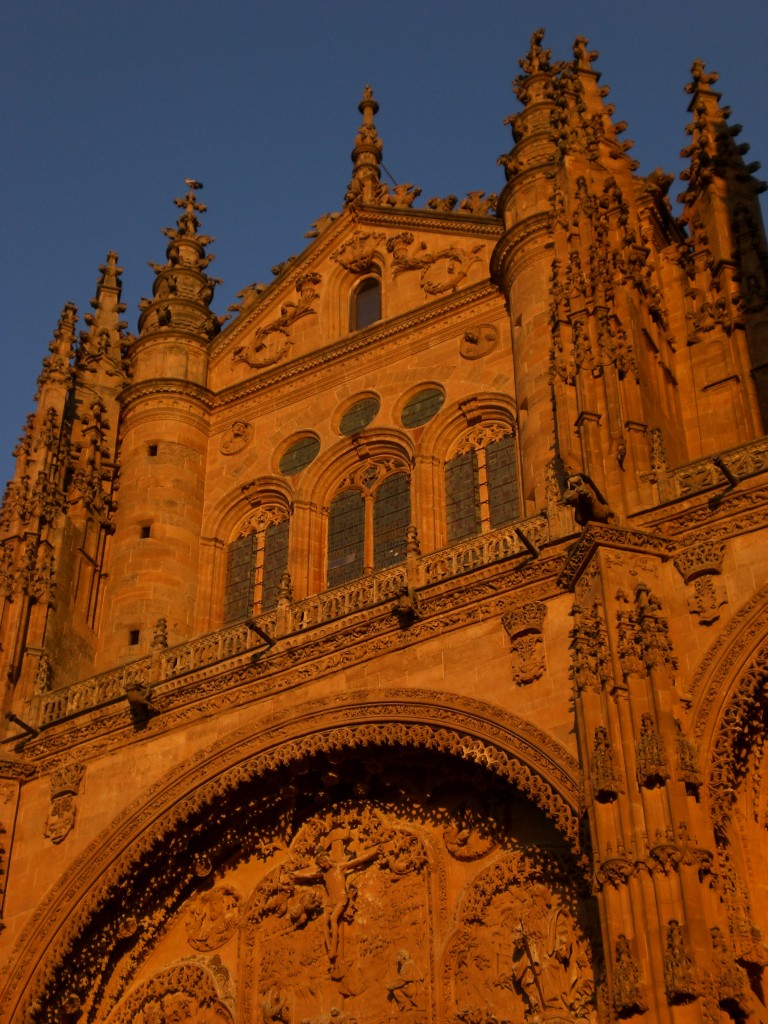 The setting sun lighting the facade of the cathedral of Salamanca, Spain.

The Ribero del Duero wine region is located west of La Rioja in the large northern plateau of Spain, about two hours driving time from the Spanish capital, Madrid.

The Ribero del Duero’s best known wineries are in the western part of the area known to wine connoisseurs as “the Golden Mile” (la milla de oro), along the Duero River valley. While visiting this wine region, I’ll be able to revisit the Spanish cities of Segovia and Salamanca between wine tastings.

A wine tour of  Jerez de la Frontera will give me the chance to visit the Spanish southern autonomous region of Andalucia and the municipality of Cádiz.

Jerez de la Frontera is best known as the  world capital of sherry, a fortified wine made from white grapes, popular with the British (and my mother).

This region saw wine making as long ago as the Phoenician settlement in 1100 B.C. and through the Roman period. However, it was actually the Moors who introduced the distillation method that produces brandy and fortified wine in the 8th century.

This region has jumped on the enotourism bandwagon and sherry enthusiasts can find many tours that follow the Route of Sherry Wine and Brandy.

Do you have a favorite Spanish wine? Have you ever done any wine touring in Spain? Do you think you would consider making that part of a Spain itinerary?

How to Tell if It's Midlife or Dementia Midlife memory loss over fifty? We finished remodeling about two months ago....