It’s a painful relationship that Lee Gaitan has with her favorite cosmetics, but she will continue to be loyal anyway. Read more from Lee on her blog.

Okay, Bobbi Brown, now I’m mad! You, the savior who came to my rescue after Lancôme cavalierly turned their backs on me a few years ago, have just managed to tick me off. Make no mistake, I am a woman who needs your eyeliner—not likes or enjoys, but needs, as in requires for my daily survival!  In an unfair twist of fate, I ended up with a completely mismatched set of features: dark brown hair, bestowed first by nature and in the last decade or so by L’Oreal, incongruously coupled with very fair skin, light eyes and nearly invisible lashes. I’m not kidding, my lashes, although of decent length, are practically clear. 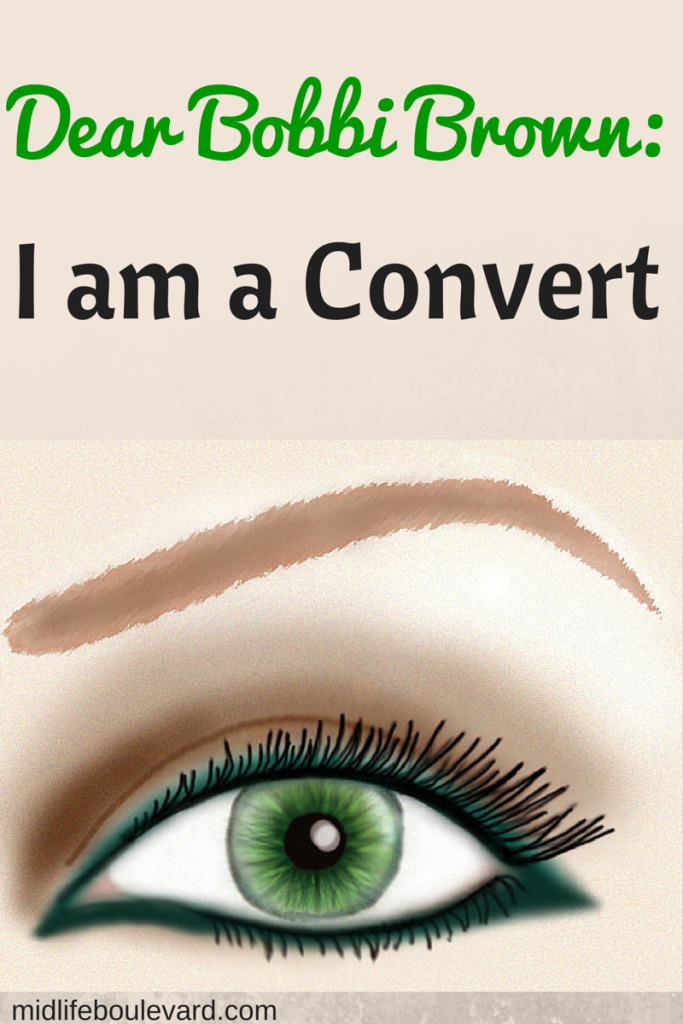 It seems to violate some natural law for a person to have such dark hairs springing from her head and such colorless ones fringing her eyes, but that’s what I have. If I am not wearing eye make-up, my eyes recede into nothingness, blending in so completely with my complexion that it looks as if I have pinholes instead of eyes. And with my increasing age has come the increasing transparency of my eyelids, so that they now have a pinkish, inflamed hue to them, not unlike those of a white rat.

So, yes, eyeliner is essential for me if I want to avoid shrieks of “Run, it’s the rat lady” as small children flee from me in horror. In fact, I have found that for everyday wear, I can actually skip the mascara and shadow as long as I use a good eyeliner, a move which simultaneously safeguards the emotional well-being of impressionable children and affords me an extra snooze cycle on workday mornings.

Until about four years ago, my go-to product was Lancôme’s cake eyeliner applied with a wet brush, but as has happened with so many of my beloved products over the years—not to mention my first husband—it up and dumped me without any warning. When I found out Lancôme’s liner was being discontinued, I bought up all the remaining stock I could, but eventually I came to the end of my stash. I frantically scoured cosmetics counters and the Internet for a comparable replacement, to no avail. The eyeliner market was heavily flooded with various types of pencils and pens, but none of them were suited to my eye lid specifications. The pencils were too smeary and the pens were too hard to control. And neither was compatible with midlife upper lid crepiness.

I was completely bereft…until, like manna from heaven, Bobbi Brown Long-Wear Gel Eyeliner fell into my hands, via my friend in St. Louis who picked it up on QVC and my daughter who bought it at a mall in Providence, Rhode Island—both in the same week, so it was obviously fate. This liner, in Espresso Ink, is a magnificent product, no hyperbole at all here. It slides, glides, and hides. It defines without smearing, peeling or cracking. It just about restored my will to live when I used it for the first time, and I have lined my eyelids in Espresso Ink nearly every day since. At 23 bucks a pop, it’s not exactly bargain priced, but you can’t put a price on magnificence.

So what’s the problem, you ask. You know the saying about having too much of a good thing? Well, that is the problem in a nutshell, or a .1-ounce/3 gram glass jar, in this case. Although that sounds like a miniscule amount, it is actually a lot of eyeliner. So much liner, in fact, that it is virtually impossible to get to the bottom of the jar before its “gelliness” expires. Short of using it to draw a mustache, beard and sideburns every day, there is no way one woman with the standard issue two upper and two lower lids can go through that much liner before its luxuriously smooth texture turns to dehydrated brittle clumps. Every time I reach this point, it’s the same routine.

Unable to bring myself to throw out half a jar—that’s $11.50 worth—of liner, I try different ways to extend its usability. This morning I excavated the top crusted layers with a cuticle pusher, trying to uncover a little pocket of still pliable gel; I applied the clumps one at a time and tried to fuse them together to form a line; I wet the brush with water and even a bit of moisturizer. All epic fails, as the kids say. I finally acknowledged defeat, threw out the jar and headed off to Nordstrom to shell out another $23.00, plus tax, for a jar of gel liner, knowing full well that half of it would be lost to me. What is the reasoning here, Bobbi? Why not sell half as much for half the price and eliminate not only the waste of product and packaging, but also my frustration. I appreciate a manufacturer who actually tries to give you more than you expected, but if half of the product goes bad before you have enough time to use it, what’s the point?  I can’t live without you, Bobbi, but I gotta be honest here, a little of you goes a long way!

Lee Gaitan has worn many hats in her 25 years as a professional communicator, from public relations writer and television host to stand-up comedienne and educator. She is the author of two books, <a href="http://www.amazon.com/gp/product/1563524716/ref=as_li_tl?ie=UTF8&camp=1789&creative=390957&creativeASIN=1563524716&linkCode=as2&tag=midliboule-20&linkId=BEG74U32UAGXOOVE">Falling Flesh Just Ahead…and other signs on the road to midlife</a>, and the recently released <a href="http://www.amazon.com/gp/product/1478723513/ref=as_li_tl?ie=UTF8&camp=1789&creative=390957&creativeASIN=1478723513&linkCode=as2&tag=midliboule-20&linkId=QNLFXKWOH7MKN5AF">My Pineapples Went to Houston—Finding the Humor in My Dashed Hopes, Broken Dreams and Plans Gone Outrageously Awry</a>. She has also authored a chapter in the bestselling book, The Divinity of Dogs, and is a blogger for The Huffington Post.

Lee Gaitan has worn many hats in her 25 years as a professional communicator, from public relations writer and television host to stand-up comedienne and educator. She is the author of two books, Falling Flesh Just Ahead…and other signs on the road to midlife, and the recently released My Pineapples Went to Houston—Finding the Humor in My Dashed Hopes, Broken Dreams and Plans Gone Outrageously Awry. She has also authored a chapter in the bestselling book, The Divinity of Dogs, and is a blogger for The Huffington Post.

Hilariously told, as always, but these struggles are real! I am still mourning the loss of Redken wool shake. I don't need 3 million different versions of 'surf spray'. Surf spray is not the same. I need wool shake. My hair has been having a bad day for 2 years, since my stockpiles ended. & mascaras always do this for me - I never finish a mascara before it gets ruined from being too old. I have to have Bobbi Brown concealers. In fairness, they do both last for ages & keep.

Have you tried the Benefit cake eyeliner?

No, but thanks for the tip. I will check it out!

Seriously, Jane, my ex didn't give me any notice before he disappeared either, but it was much worse when the Lancome liner dropped off the map without notifying me in writing! Thanks for writing!

I haven't tried the gel...but do find that my favorite cosmetics disappear off the shelves without warning...sending me in search of a suitable replacement...which is both frustrating and costly. ;)

Oh yes! Why do they do that? Whether high end or drugstore, something always gets wasted. So annoying.

I know! Today was the tipping point for this jar--crumbles, nothing but crumbles! Thanks for writing, Joy!