Our four night stay in Cuenca, Ecuador, gave us three full days for sight seeing. I relied on Alberto, the bilingual owner of Hotel Casa Ordonez, for suggestions. One suggestion we followed was to plan a tour by taxi for a day trip outside Cuenca City. 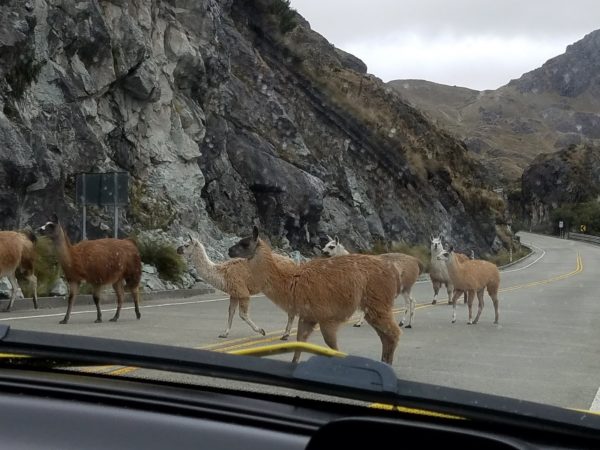 Why did the llamas cross the road? You don’t have to drive too far outside Cuenca to realize you’re in the Andes Mountains.

Rather than going on a group tour, Alberto suggested hiring a taxi driver for a day trip outside Cuenca. He recommended Rene who would roughly follow the same itinerary as one of the popular tours for $10.00 per hour. We ended up spending $80 for our 8 hour private tour. This tour would have cost us $300.00 booked through a tour operator.

Note: Ecuador’s official currency is the United States dollar which is certainly convenient.

Alberto stressed that Rene was not billing himself as an “official tour guide”. Although Rene did not speak English, Alberto knew I am reasonably proficient in Spanish and could translate for my monolingual spouse. (In all fairness, Mr. Excitement is not totally monolingual. He can grasp about half of a conversation in Spanish, but he refuses to speak it in my presence.)

With me riding shotgun and Mr. Excitement ensconced in the back seat of the taxi, off we went. We headed northwest, out of Cuenca to Parque Nacional Cajas (Cajas National Park). Our route took us through the high rise condos of the section of city affectionately called Gringolandia by native Cuencanos.

We were soon driving out of the valley of the four rivers that flow through Cuenca on the road that leads over the Andes to the port city of Guayaquil. 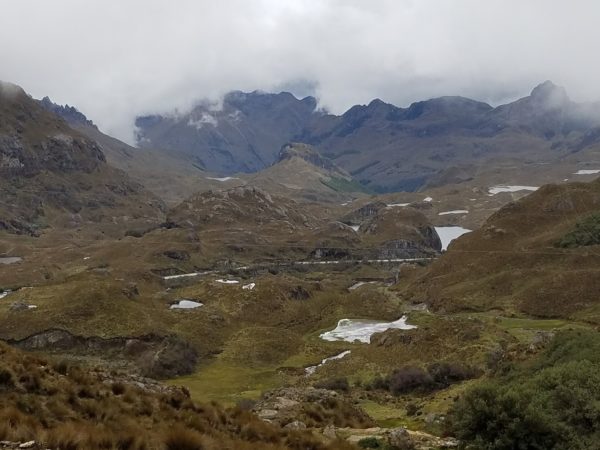 Our first stop was the Tres Cruces (Three Crosses) overlook at 13,671 feet (4,167 meters) from where you can see the many glacial lakes dotting the landscape. Tres Cruces marks the point at which the Continental Divide is closest to the Pacific Ocean in all of South America.

Are you are wondering if over 13,000 feet in altitude feels different than 8,300 feet? Yes, it most certainly does for people like us who are accustomed to hanging out at or about sea level. I huffed and puffed up inclines and stairs and felt light headed at times.

We stopped at the Lake Toreadora Visitors’ Center. This complex has a cafe, bathrooms, a small museum, and the ranger station where you must register if you want to hike. They are strict about hike registration, but a park ranger allowed us to go behind the ranger station a short distance to scope out the beginning of the trail around the lake. We convinced ourselves we were not equipped to handle the boggy terrain in sneakers.

Mr. and Mrs. Excitment at Lake Toreadora just outside the ranger station, having just decided that discretion is the better part of valor and they were not equipped for a hike.

If you do want to do a serious hike or to camp in Cajas National Park, the services of a hiking guide is recommended unless you are an experienced hiker at altitude. Apparently, the trails are not always well marked and some complain that the ranger station maps are either not available or not helpful.

We recommend waterproof hiking boots and clothing to protect you from weather conditions that can quickly change from hot and sunny to cold and wet. At this altitude, a high SPF sun block is a must even on a cloudy day.

You can also arrange specialty tours in the Park for bird watching and for trout fishing in the myriad glacial lakes. If you just want to eat trout, the area is known for trout restaurants on the main road just outside the park.

Tip: According to Rene, the road to Cajas National Park is very crowded on weekends as Cuencanos head to the coast near Guayaquil over the mountains. Also, there is limited parking at the ranger stations.

It is possible to take a local bus to Cajas, but there is no official bus stop for the trip back. You are supposed to just go to the road and flag down any bus traveling between Guayaquil and Cuenca, not always a sure bet.

We returned to Cuenca and did a quick stop at the Turi Overlook, a stop on most city tours of Cuenca. Apparently, there are places to buy souvenirs, a nice church to visit, restaurants, and a large swing, but our stop was just to take in the view.

On the Road to Traditional Handicraft Centers, the Towns of Gualeceo and Chordaleg

Leaving the Turi Overlook, we headed out of Cuenca, this time to the east, on our way to two towns known for traditional handicrafts, Gualeceo (leather) and Chordaleg (silver).

As we left the city, Rene pointed out the large number of small houses under construction. He explained that many of the men are working in the United States to send back money to their wives and children. Some of this money is used to build houses. Many local men lack immigration status in the United States. Consequently, they spend many years in the United States before they can return to Ecuador. Rene views the long term absence of many fathers and husbands as a large negative for civil society in and around Cuenca. 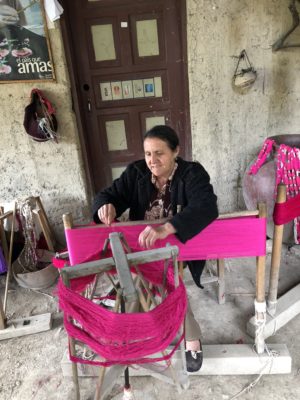 Just outside of Gualeceo, we stopped at La Casa de la Makana. Makanas are woolen and cotton shawls indigenous to the Cuenca area of Ecuador. Apparently, this is a popular tour stop, but we were the only people there and were given a demonstration and explanation of the entire traditional labor-intensive process, starting with coloring the yarn with natural dyes, to weaving on a back loom and the knotting technique.

The shawls are beautiful, but I was in my “we can only bring home refrigerator magnets” frame of mind, so we looked, but left without making any purchases. There was no hard sell.

Lunch at the Market in Gualeceo 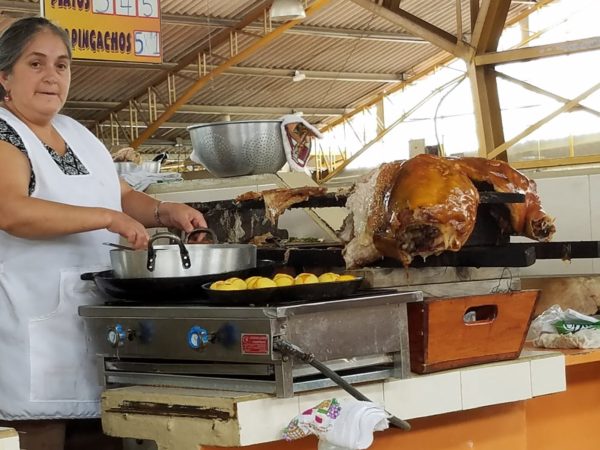 Rene picked this typical “hornado” stand for our traditional lunch in the Gualeceo, Ecuador market.

By this point, Rene had figured out we were not going to be big souvenir shoppers. Before down-sizing our living space twice, we used to buy traditional handicrafts on our trips. But now, I’m afraid we’re limiting ourselves to the afore-mentioned refrigerator magnets.

When we arrived in Gualeceo, Rene miraculously found a parking spot in front of the main market for our lunch stop.

The market a was a highlight of the trip. I suspect our experience would have been less interesting without Rene who knew his way around and knew where to find local, traditional food for lunch.

First, we purchased fresh arepas. I think I can best describe arepas as dense fried “pancakes” made from white corn flour. They are a filling, popular street food and may include a fresh cheese.

Rene then took us upstairs to the “Hornado” section. Hornado means “cooked in an oven” and what is slow cooked in the oven is pork. You know it’s pork because whatever is left of the pig is on display at each hornado stand. Pieces of pork are pulled off the carcass and it is served with potatoes and a little salad. 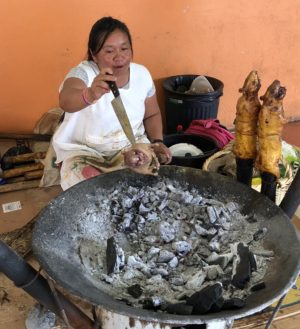 Cooking cuy outside the Gualeceo Market.

As we ate, Rene told us he enjoys having a go at the head of the pig. He is also quite fond of cuy, guinea pig. He explained that in the late afternoon, a row of grills to cook cuy are set up outside the market. People pick up  grilled cuy on their way home from work. We were “lucky”. One woman had already started grilling her cuyes. (Yes, I looked up the plural of cuy.)

Disclosure: I’m a hypocrite. I came home from our trip to Ecuador and Colombia trending towards vegetarianism. I was mostly fine eating meat until I literally came face to face with lunch. I already had a policy of not eating any animal I’ve ever had as a pet which means I’ve never had any cuy.

The Silver Town of Chordaleg

Our last stop of the day was in Chordaleg, a short 15 minute ride south of Gualeceo. If you are looking to buy authentic Ecuadoran silver jewelry, apparently, this is the place to do so. 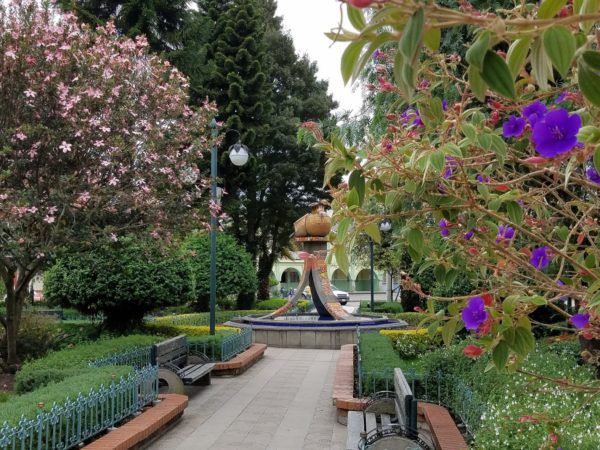 The lovely plaza in Chordeleg, Ecuador, a town known for crafting silver jewelry.

There are many jewelry stores surrounding the charming, spotless, main square. We did not go into any of the stores. Bargaining is expected in much of the world. I abhor bargaining. I’m also the world’s worst bargainer. I’ve even had store owners take pity on me and bargain with themselves on my behalf because they are apparently too embarrassed to sell me something for the first price they quoted. Definitely don’t take me with you to buy a car.

The ride back to Cuenca should have taken about an hour, but it was a little longer because of traffic. Rene was clearly an experienced, cautious driver. Other motorists, not so much.

We weren’t tempted to rent a car while in Cuenca. It is possible and inexpensive to get to all of the places we visited by public bus, but we never would have been able to see as much on our day trip outside the city had we done so. The $80 cost of our 8 hour day with Rene was well worth the money.

A value added aspect of our time with Rene was that he was happy to tell us about his life, and the lives of different strata of Cuenca society.

The best way to pick tours in and around Cuenca and the surrounding area is to ask for a referral where you are staying. Local hotel owners typically will suggest guides or tour companies with whom prior guests have been satisfied.

Do you ever go on half day or day tours during your independent travel? Do you have any suggestions for picking one?