As winter approaches here above 39 degrees north latitude, I thought now would be a good time to share ten things I learned living in Honolulu, Hawaii. 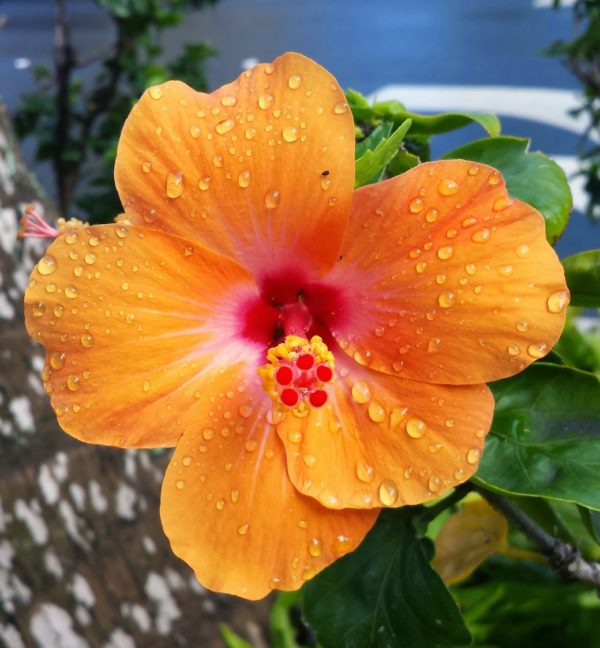 A beautiful rain kissed hibiscus after a Honolulu shower.

When my husband, Mr./Dr. Excitement, asked me if he should do a three month sabbatical at the University of Hawaii Cancer Center in Honolulu, I hesitated for maybe a nano-second before saying “yes, absolutely positively”, and please do it during the winter. Thus, we had the good fortune to spend three months living in Honolulu, Hawaii during one of the worst winters in Philadelphia, our home city.

Even if you just visit Hawaii for a week, you will leave saying “aloha” for “hello” and  “good-bye” and you’ll be thanking people with “mahalo“.  If you stay for two weeks, you’ll be referring to children as keiki and when you ask someone on the street for directions, rather than right or left, you will expect to hear, mauka (towards the mountains) and makai (towards the sea).

You may also build up some resentment of the kama‘aina discount, a discount only for Hawaii residents, common in restaurants and some museums. (Thank you for the University of Hawaii I.D. card!) If you stay longer than two weeks, you will start feeling like ohana (family).

[*There is some disagreement as to whether “haole” is a derogatory term for white people. The discussion in the Urban Dictionary is illustrative.]

In Honolulu, many street names are in Hawaiian. Written Hawaiian only uses 13 letters—and one of the them is actually a reverse apostrophe, representing a “glottal stop“.

The fact that there are only 7 consonants means that initially, a lot of the multi-syllabic street and place names seem very similar and unpronounceable for newly arrived haoles. Asking directions might result in this conversation:

Helpful Passerby: Take Liliuokalani makai to Kalakaua, go right to Kaulani Avenue where you have to go mouka, but be careful because Kaulani becomes Kanekapolei.

Me:  You still have no idea how to get to the Kamehameha Highway, do you?

Although not used with tourists, if you are living in Honolulu, you will discover there is actually a widespread Hawaiian Creole language that, in addition to Hawaiian, borrows words from the languages of immigrants from countries such as England and the United States, Portugal, China, Japan and the Philippines. This spills over some into the Hawaiian accent in English, so I had to listen very carefully sometimes to understand the locals — like I have to do sometimes as a Yankee traveling in the southern U.S. or rural Ireland.

However, on a day to day basis, it was the micro-weather I found remarkable. On several occasions, I was looking up at blue sky, but it was raining. I once waited out a downpour only to realize that it was happening only on one side of the building.

A typical TV news weather report goes something like this:

While this might make it difficult to know whether to bring an umbrella, it also results in frequent lovely rainbows.

Dr. Excitement heading off to work in his Hawaiian shirt.

Mr. Excitement is somewhat obsessed by Hawaiian shirts. Actually, in Hawaii, they call them “Aloha Shirts”. (Like we don’t refer to Philly cheese steaks in Philadelphia — because what else would they be?)  In Hawaii, he liked wearing them to work — displaying his playful, irreverent side. 😉

However, we noticed that no other researchers at the University of Hawaii Cancer Center were wearing Aloha shirts.

Pretty much the only people who wear Aloha shirts are tourists, hospitality service workers who have to wear them as part of their uniforms, political candidates—and, of course, Mr. Excitement.

This is not to say people dress formally. The Cancer Center director wore jeans to testify before the state legislature, explaining they’d be suspicious if he showed up in a suit and tie.

4) It is Not a Good Idea to Jaywalk in Honolulu

The Honolulu police (the ones who aren’t in the mythical Five-0 task force) want you to know they are tough on jaywalkers. Along the streets that cut through the main tourist areas, the traffic lights are rrreeaally long.

Mr. Excitement and I like to live on the edge sometimes and have been known occasionally to look both ways and then cross against a traffic light. If we’re feeling particularly rebellious, we might even cross in the middle of the block. Philadelphia peace officers have bigger fish to fry than nailing extremely sober looking, jaywalking baby boomers.

One day, soon after we arrived in Honolulu, I was waiting at one of the interminable traffic lights at a small side street. I was daydreaming and when the coast was clear, I proceeded to cross the street.

Suddenly, I heard some agitated voices speaking Japanese behind me. It turns out I had been an unwitting Pied Piper. The 15 people who followed me off the curb realized mid-street that I had led them into the perdition of disobeying the little red hand commanding us to wait from traffic light stanchion. I apologized profusely and slunk away.

6) Assume You Should Remove Your Shoes Before Entering A Residence

Wear clean socks and make sure your toe nails are neatly trimmed in Hawaii. As in Japan, the default in Hawaii, is to remove one’s shoes when entering a residence.

I was a little taken aback the first few times people showed up at our apartment door and immediately kicked off their shoes or sandals. We have now imported this tradition to our mainland abode. It makes a lot of sense if you think about it.

7) In Some Areas of Honolulu, Especially Waikiki, It Would be Helpful to Know Japanese 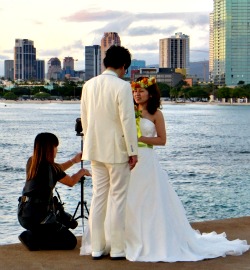 When we visited Pearl Harbor, Mr. Excitement was taking my photo in front of the entrance sign when a gentleman bowing and speaking Japanese rushed up to us. He launched into the universal pantomime for “Do you want me to take your photo together?”

I don’t know how many German tourists visit Dachau, but at Pearl Harbor, it’s a good bet you might be sitting next to a Japanese citizen in the national park theater, watching archival footage of airplanes bearing the insignia of the Rising Sun bomb right where you’re sitting—over 70 years ago.

Just as Spanish is widely spoken in Miami, in Honolulu, there are restaurants where the menu outside is in Japanese only.

If you want a job in the hospitality industry in Honolulu, the ability to speak Japanese is likely to be a requirement.

Japanese brides and grooms being photographed on the beach is an omnipresent scene as Honolulu is a Japanese destination wedding favorite.

8) I Am Not Fond of Hawaiian Food 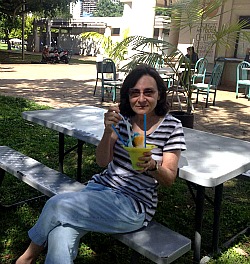 Doing my travel blogger due diligence, trying shave ice on a hot day.

When we travel, sampling the local cuisine is usually a highlight. In Hawaii — not so much.

Most tourists from the U.S. mainland want to try poi, a traditional Hawaiian food made from pounded, fermented taro root. Many then make a face and describe poi as tasting like wallpaper paste. Hawaiians find it odd that so many mainlanders apparently consume wallpaper paste.

Another popular contemporary dish on the menu at most restaurants in Hawaii is loco moco. It’s usually two or more hamburger patties, on top of a pile of white rice, topped with a fried egg and covered in brown gravy. If you eat an entire serving of loco moco, chances are it will be your last meal of the day—and probably the next day too.

In the interests of research, I made it my business to try a mai tai whenever possible. With slight variations, a mai tai is some type of tropical fruit juice with rum. Meh.

And then there’s the Hawaiian obsession with Spam. They even have spam sushi. Wikipedia defines Spam as a “canned precooked meat product”. ‘Nuff said.

There are federal highway dollars to be had for building interstate highways. There are three of them on the island of Oahu.

Apparently, the feds aren’t really strict on the “inter” part of “interstate”.

Hawaii isn’t all palm trees, beautiful mountains, beaches and hula dancers. In 2013, Honolulu also had the second worst traffic congestion in the country, behind only Los Angeles.

10) Paradise has an Underbelly

There Are Scams in Paradise

We actually learned this before we arrived in Honolulu when we were looking online for an apartment to rent. Honolulu realtors don’t make commissions on rental units, so at best you’ll be dealing with a property management office. At worst, you’ll be running into scams on real estate websites such as Zillow, Trulia and Craigslist.

Bottom line, do not send money to anyone before thoroughly vetting them and the property they claim to be renting. If the price seems too good to be true, it probably is.

Book your Oahu tours through a hotel concierge or on-line. If a nice looking young man in a Hawaiian shirt with a little booth on the street tries to sell you a heavily discounted tour, most likely, there are all sorts of strings attached.

The Homeless are Omnipresent If I had a choice of where to be homeless, chances are I’d pick Honolulu too. A park next to the warm South Pacific has it all over a freezing pavement.

Honolulu is a big city with big city benefits and drawbacks. However, it is wedged between beautiful mountains and the Pacific Ocean, views of which I never tired.

Living in Honolulu, within minutes you can be at the beach. Within an hour, you can drive to or take a bus to an uncrowded beach. You can leave your woolies home. I might not want to live there forever, but I sure wouldn’t mind a long visit to Hawaii every winter. View from the Pali Lookout near Honolulu Windward Side Scenery on Oahu 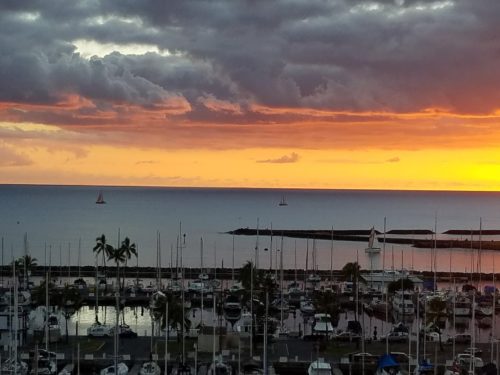 A Waikiki sunset in Honolulu, Hawaii.

Have you visited Honolulu? If so, what was your opinion? If not, do you think you’d like to visit or live there?

This is great Suzanne! Most people just go for a week or 2 and don't get the full impact. I used to do business in HI for 10 years. I would fly in every 2 months for a week. My first visit the office I was supervising told me in Hawaiian style which is not direct because they don't want to embarrass you or have you loose face, that my suits were not the correct attire. Also I was coached not to extend my hand first for a handshake being a woman to a man. It was close to doing business in a foreign country like Japan. The logistics for business was mind boggling since literally product was on a boat and had to be stored but not too much! The Marine and Navy base I also had to call on were a thousand times more relaxed than the mainland. The traffic and the street names are also something you do not want to navigate uncoached!It was challenging but I loved it because the people were wonderful.

Thanks for sharing your experience. Hawaii is a full fledged U.S. state, but it definitely has its own unique vibe, customs, culture and pace ---- and you don't need a passport to visit (if you're a U.S. citizen).

Halloween Cocktails Your Guests Will Love

Halloween is mainly for the kids, but with these fun Halloween Cocktails the adults get a treat too! This post...