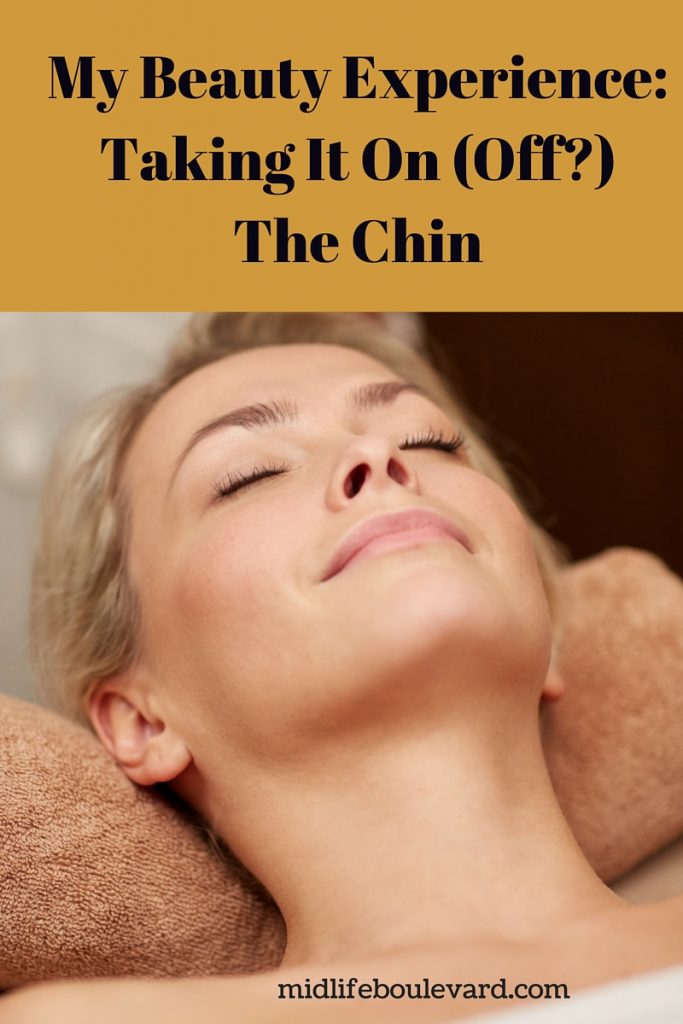 Most of the time, I feel like my spirit is younger than my physical age. My body, however, insists on exhibiting signs of middle age no matter how youthful I feel at heart.

I have been getting my brows waxed for years; it’s more effective and quicker than tweezing. That didn’t feel like a concession to age, more of a perpetual necessity.

A few years ago, I began having my upper lip waxed. This was not that welcome an addition to my beauty routine, and it never really feels like it works (I watch myself on video, for example, and think how do I get rid of that dark area?!?!).

The clincher in the hair removal trio, though, was the day the technician said, “you’re gonna do your chin too, right?” Apparently I was.

I became accustomed to having three services instead of one, and I usually did a pretty decent job of putting the whole thing in the “it is what it is” category. I tried to do it once a month, but let’s be honest. I work at home, don’t go out all that much, and it’s easy to let the intervals between waxing grow much longer.

Until I am about to participate in an event, see someone I don’t see often, or have some other motivation to take care of it.

The Case of the Overzealous Waxer

That’s what happened recently. It was Friday, and I had plans to go see my good friend play Edna Turnblad in Hairspray. It is absolutely zero exaggeration to say his Edna would put most of us ladies to shame. I couldn’t show up with a hairy chin. Time was running short until I had to leave to drive to the performance (a couple of hours away). I finally finished the day’s work, and had run out of time to go to my usual waxing professional. I only had time to go to the closest salon, which has never been my preference but works in a pinch.

I walked in, asked if anyone was available to do some waxing, and was immediately taken to the back. I was relieved that this was apparently going to be a quick in and out, permitting me to get on my way to Lake City.

The technician waxed my eyebrows. So far so good.

Here’s the thing. She kept going. This woman was applying wax and yanking the strips off of areas of my face that had never seen wax (or hair to speak of) before.

My mind was racing. Why is she waxing my cheeks? When will this end? In my head, I kept hearing my mom telling me, when I was a kid and wanted to start shaving my legs, “once you start the hair will grow in darker if you let up.” OMG! Were my cheeks now going to start sprouting dark hair? What had I done by coming here (and by not stopping this woman when she ventured away from the brow/lip/chin trio)?

Finally, she applied lotion and cooling solution (which I desperately needed by this point) and with relief I followed her to the front desk to pay.

I do not know what the person at the front desk said (they were not speaking English), but apparently she did not think the technician had done enough (in retrospect this boggles my mind), but through hand gestures and body language, she indicated that I needed to return to the waxing room.

And despite the fact that my face already felt like it had been through the wringer (it had! It would have been more efficient to just drip my whole darn face in a vat of wax), I went back.

When I went back, the technician attacked my chin again (“attack” being a truly representative word). Finally she let me go and I didn’t ask any questions as I hastily escaped out the door.

I went to the play (which was AWESOME), returned home, and went about my weekend. By the following Monday, the effects of the Overzealous Waxer were emerging. My chin looked like I had vigorously rubbed it with sandpaper. It was a mess. NOTE: I have an aversion to pictures of wounds on social media (which is a challenge because I’m a runner and my fellow runners LOVE to show off their blisters and lost toenails) but if you want to see the results of the Overzealous Waxing, click here.

As I write this (8 days later), it is ALMOST fully recovered.

As the week went by, I was trying to figure out what to do (short of the obvious decision to remove this salon from my “waxing vendors” list).

I thought about the customer service issue I had had at Publix that same weekend. I had ordered my daughter’s birthday cake several days in advance, and a few hours before it was to be ready, they called to say they didn’t have that design. I exchanged messages with them on Twitter to express my dissatisfaction (tactfully). I went to another Publix to look for it. I went (ultimately) to my Publix and talked with the bakery associate, who wrote the message on a different cake. I worked with Publix to make it mutually right (as much as possible).

I kept telling my husband that I was afraid to talk to the salon. I was afraid the technician would lose her job. He pointed out that I was physically injured but protecting her from losing her job (while putting other customers potentially at risk). HMM. Why did I feel I could dialogue with Publix but not with the salon? Had I made assumptions about the cultural environment at the salon?

The more I thought about it, the more I decided I at least needed to let them know (and save some other customer from rug burn chin). When I went in, I explained that I was not upset (yeah, I know — I was upset and I shouldn’t have started with that line but personal assertiveness reform happens incrementally) but that I wanted to point out the condition of my chin.

They were apologetic, offered to put cooling solution on it (no thanks, a little too late for that!). They said the wax had been too hot (ya think?!).

I don’t know if my decision to talk to the salon will change the outcome for future customers, but in a week when I had just written about the necessity and power of saying what you mean, it felt hypocritical to keep my mouth shut.

I read a post recently that pointed out: “When you speak assertively, you may not always say what people want to hear, but you respect the listener as well as yourself.” There’s so much truth to that.

When I used this situation as the basis for a recent Toastmasters speech, the takeaway was the fact that although “taking it on the chin” is perceived as a negative, in the case of the overzealous waxer, I would have been better off to take it on the chin (instead of the cheeks and other facial real estate)…and then tell her to stop. And certainly not go BACK to the waxing table, like a sheep.

Have you had a time in your life when you needed to say no but struggled to find a way? I’d love to hear about it!

Fall Fashion: Five Pieces To Add To Your Collection

Are you dreaming of cooler temps and fall fashion, or is it just me? Maybe it is because I am from...