Mr. Excitement and I are accustomed to traveling independently, except for the occasional cruise. However, when planning a trip to Turkey, I decided to give small group travel a try.

Our 15 person mini-bus parked between the behemoth buses used by other tour groups.

We could only spend 10 days traveling in Turkey, so I decided a tour was the way to go to make the best use of our limited time. I ultimately chose a G Adventures, 8 day, “The Best of Turkey” small group tour.

I always thought G Adventures was a tour company aimed at younger travelers. Indeed, some of their trips are quite strenuous and more adventuresome than I’m looking for. I think my bungee jumping days are over ;-).

G Adventures rates the physical requirements of each trip. Their “comfort” level small group tours are suitable for travelers of all ages who do not have mobility problems on uneven surfaces, who can handle their own luggage, and who can at least sustain up hill walks of 20 minutes or so.

I was attracted by the reasonable price of our tour, the itinerary and the travel philosophy.

I realize that “reasonable price” is a relative term. We were able to use AARP member discounts. Contrary to popular wisdom, you do not have to be 50 to join AARP. You will have to look at the G Adventures website to check prices for any tours that might interest you.

The prepaid price for our tour included all transportation in Turkey (including an internal flight and a ferry ride), all hotel nights, most site admissions, and guided tours. It did not include meals other than breakfast at our hotels.

G Adventures does not impose a single supplement unless you request a private room. They will assign you a same sex roommate unless there is an odd number of singles.

G Adventures requires proof of medical insurance and a visa was required for us to enter Turkey which we were able to obtain on-line.

G Adventures specializes in small group tours. Our group consisted of 15 people, ranging in age from 24 to 60-somethings and everything in between. Six of us were Baby Boomers. We were 4 couples and 8 singles from 6 different countries: the U.S., Canada, the UK, Bahrain, Portugal and Switzerland.

When traveling with a group, the members of the group can make or break the experience. No one in our group was a “problem” and we all bonded nicely across age differences and nationalities.

The Tour Guide Is Crucial to the Small Group Travel Experience

G Adventures tours are led by a Chief Experience Officer (CEO). Our CEO, Gonça,was a competent, pleasant, young Turkish university graduate with a good command of English who was eager to share her country with us. Gonça is a licensed tour guide, having completed a rigorous study and certification process required by the Turkish government.

Gonça even remained good natured and enthusiastic when she developed a pretty miserable sinus infection. She had to take part of one day off to recover, but found us an excellent local guide to cover that day’s tour of Ephesus.

Gonça’s willingness to answer questions about the issues of the day in Turkey with her excellent English enhanced our experience.

At each location, Gonça, recommended several places to eat. We mostly chose to have dinner (and often, lunch) with her and the group; however, we were free to do our own thing if we preferred.

One evening when dinner was postponed because some in our group were enjoying a Turkish bath and massage, we and another group member used TripAdvisor to find a small, nearby restaurant with good reviews. Gonça also arranged dinner at a private home in a farming area one night which was one of the highlights of the tour.

Although our itinerary stated we would travel by public bus on some days, in fact, we used the same mini-bus and driver for the entire trip. Our bus driver, Genghis, was a cheerful sort and a nice addition to the group. Every seat on our mini-bus was occupied. It felt a little cramped on some of the longer travel days, but it was certainly tolerable. There were sufficient stops to prevent deep vein thrombosis or uncomfortable bladders.

We arrived in Istanbul a day early and booked a room at the same hotel being used by the tour, the Centrum Hotel in the atmospheric Old City neighborhood of Sultanahmet. (I obtained a better rate for our extra night than had we booked the same hotel through G Adventures).

The Centrum was within walking distance of the major sites like the Hagia Sophia, the Blue Mosque, the Topkapi Palace and the Archaeology Museum, all of which we visited on our own.

We stayed at a different hotel every night except for two nights in the town of Selçuk, our base for touring the quite amazing ancient Greco-Roman city of Ephesus. The hotels were basic, clean 2 or 3 star hotels with en suite bathrooms, except for one night spent in a 200 year old Ottoman house converted to a hostel/inn in the old town of Ayvalik.

I decided several years ago that I’m fine with basic, clean accommodations as long as we have our own room and bathroom. We survived sharing a bathroom for one night .

Photos From Our Small Group Travel Experience in Turkey

As an almost recovered lawyer, I am  a tad over fond of words, but on this occasion, I am persuaded that pictures are worth thousands of them. 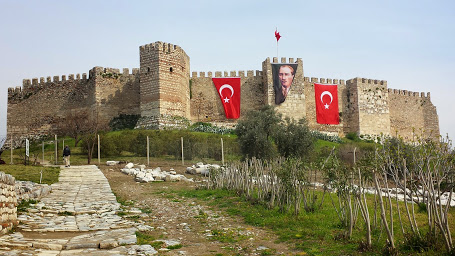 The Ayasuluk Castle-Fortress being restored in Selcuk is mostly of 14th century Ottoman origin, but there are also Byzantine ruins there, including those thought to be the remains of a 6th century basilica dedicated to John the Baptist. Archaeologists have found evidence of even earlier civilizations, also attracted by the strategic high ground. 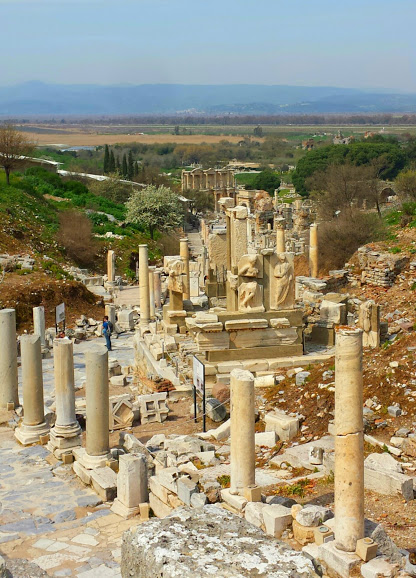 We were all quite agog at the  extensive ruins at Ephesus, I felt I could imagine life there when it was a bustling Greco-Roman city. 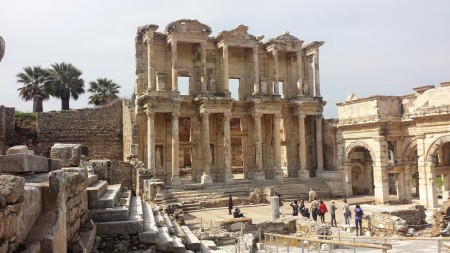 A closer view of the restored facade of the Ephesus library. We were told that by doing our tour in mid-March, we enjoyed some blossoming wild flowers and we avoided the crowds and unpleasant heat of the summer. 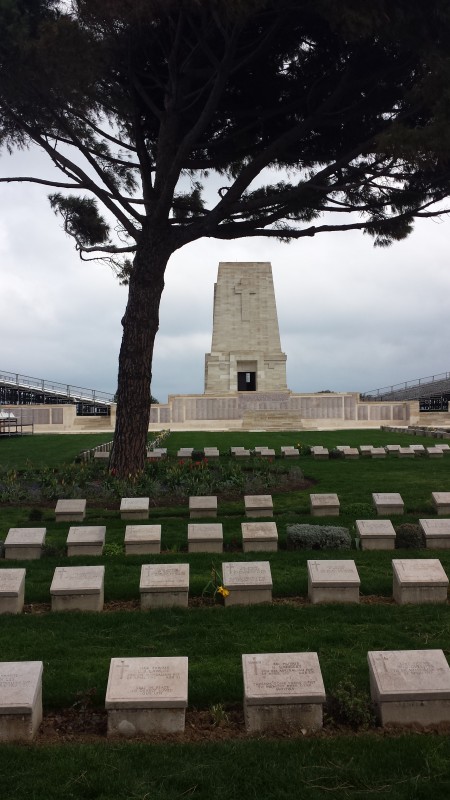 ANZAC (Australian and New Zealand) graves at the site of the battle of Lone Pine on a ridge that saw very bloody trench warfare during the Battle of Gallipoli in 1915. The Turks respect these fallen ANZAC soldiers and there is a ceremony conducted for Australians and New Zealanders on ANZAC Day, April 25th at ANZAC Cove. Although Turkey was on the losing side in World War I, their successful defense of the Gallipoli peninsula is a matter of great national pride. 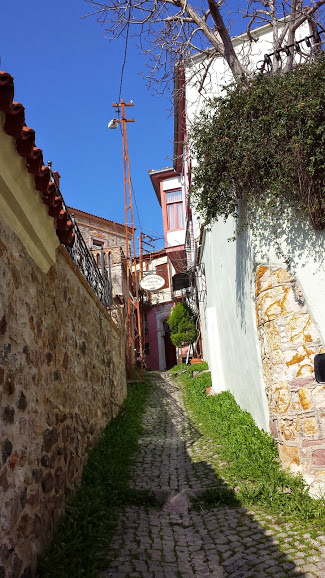 The pedestrian only “street” leading to our Ayvalik pension and one of the reasons decent mobility is required for participants on this tour.

We visited a weaving cooperative and the 9 layers of ruins of the ancient city of Troy. Like my experience at Masada in Israel, the layers of the ruins of civilizations causes me some despair for the future of the human race. 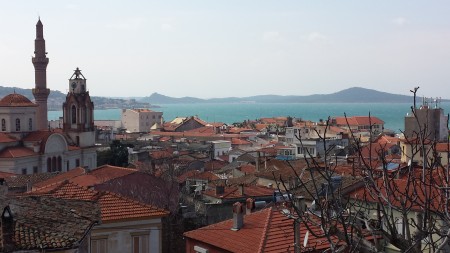 View from the back porch of our 200 year old pension (hostel) in Ayvalik, Turkey, overlooking the rooftops to the Aegean Sea. The view mostly made up for the shared bathroom. 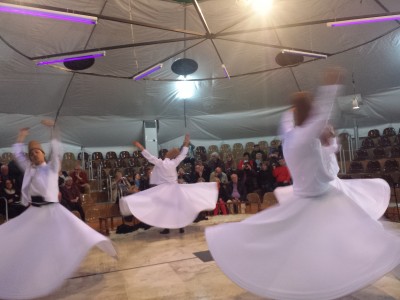 At Pamukkale, Gonça took us to see a ceremony by followers of Sufi Islamic mysticism, commonly referred to in English as “whirling dervishes”. She arranged for just our group to stay after the ceremony to be able to ask questions of the leader/teacher.

In contrast to the stoicism of the whirling dervishes, after dinner that evening, we were entertained by a belly dancer and got to try a few moves of our own. No, I am not posting the video of my attempt at belly dancing. 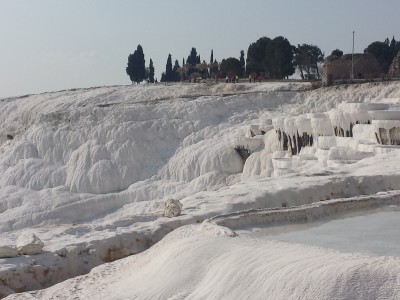 We spent the penultimate night of our tour before flying back to Istanbul in Pamukkale, the town adjacent to the UNESCO World Heritage Site containing the ruins of Greco-Roman-Byzantine Hierapolos and striking white travertine calcium carbonate terraces. Swimming in hot springs is also possible at the site.

Note: I am not a brand ambassador for G Adventures and we paid for our own tour. We wished we had the time to do the G Adventures 15 day tour of Turkey which also includes the beautiful and fascinating Cappadocia region.

Would you consider small group travel?

Thanks a lot for sharing your experiences with us . We need people to visit us and share their experiences about Turkey. Thanks one more time.

Your pictures are fabulous! Yes I would consider for a short trip a small tour. Like you I am all about clean and own bathroom and maybe I could live one night with a bathroom shared but only in a pinch!

5 Tips to Help You Ace Your Retirement!

How many of you are already started planning your “New Year’s resolutions” even though it is only November? I think...