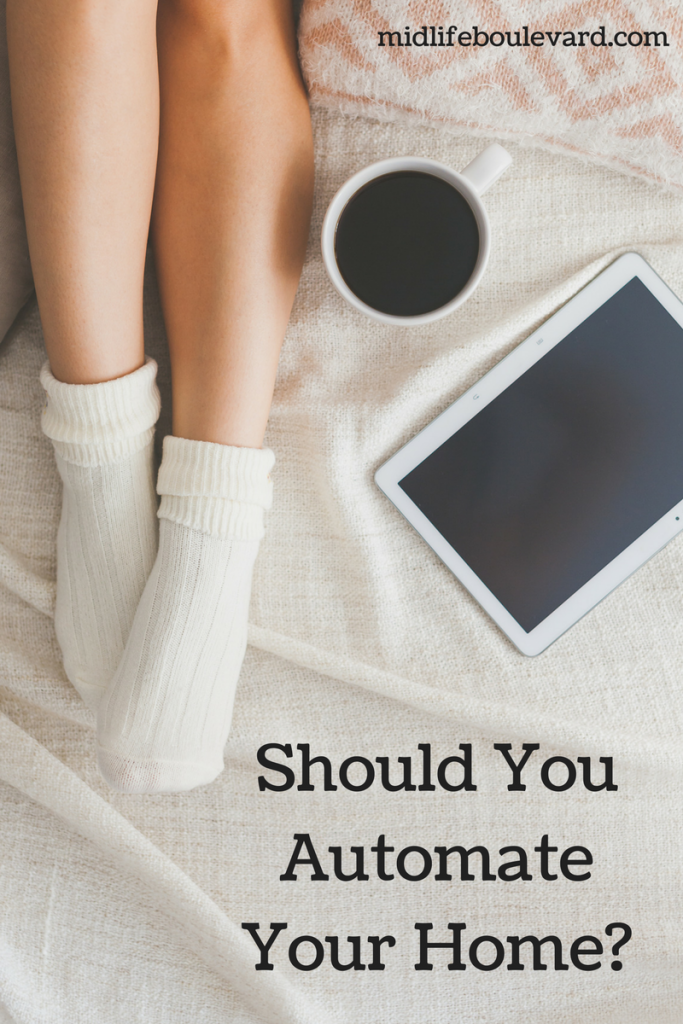 Let Linda Bernstein introduce you to the possibility of home automation. The pros and cons will support you as you decide if this is an option for you and your family. Affiliate links are provided throughout this post to facilitate your investigative and/or shopping experience.

I have a friend whose living room sofa-side lamp blinks every time Spotify plays a Rolling Stones song.

So, I don’t quite get the point of that. I would, in fact, find it annoying. But the thing is — it can happen.

When it comes to home automation, I find many ideas appealing. I’d love to be able to control my thermostat with my phone. During the winter, for instance, I could set the temp to 62º when I left the house. On my way home, I could use a phone app to bump it back up to 70º. How cool would it be to start the dishwasher by yelling “dishwasher start” instead of getting up from the couch after dinner? Or to turn on the bathroom light by mumbling “bathroom light on” during one of those middle-of-the-night-wake-up-to-pee moments?

Right now there are two readily available smart home controllers, Google Home and Amazon Echo, and there’s speculation that Apple’s Homekit app will soon have a Siri-enabled speaker device similar to Google’s and Amazon’s. (Private contractors can custom build a home automation systems as well.) Although c/net, which is generally good on all things tech, opines that Google will win this battle, I think it’s a toss-up. The Google and Amazon systems are nearly the same: they respond to voice, they’re always on, they can play music, have “smart home” partnerships, and can make shopping lists. Right now with Amazon you can order pizza or an Uber pickup, two things Google Home cannot. Google Home, by contrast, lets you sync your music and broadcast from any Chromecast-enabled speaker. That means a house full of music.

Techies have also pointed out that Google Home can pick up on a series of commands. Amazon Echo responds only to pre-existing commands in its memory. At the Google Home demo in October 2016, a presenter asked the Google Home device, “What is Adele’s real name?” Home immediately replied, “Adele Laurie Blue Adkins.” The presenter then followed up with, “How many Grammys has she won?” This marked a turning point in home automation development: Google Home knew to whom “she” referred and answered the question.

This is a big deal. Artificial intelligence is getting smarter, and is now able to figure out the context of the commands. But would you imagine that Amazon isn’t at this moment busy upgrading Echo to do the same thing? Doubtful.

So, to me, the question isn’t so much which smart-home device I would purchase. What I’m pondering is whether it’s worth spending money on one of these “personal assistant” devices to begin with.

Why You Should Purchase a Home Personal Assistant Device

Why You Should NOT Purchase a Home Personal Assistant Device:

As much as I’d love to be able to talk to my appliances (I know that sounds weird), I think that the average person (me) might not be ready for an automated home. Perhaps I’ll start with a Nest thermostat and try to save for the Samsung refrigerator. I mean, I truly do need a new refrigerator as my veggies in my bins turn to ice. For now, though, I can live without hearing the Rolling Stones just by saying their name.

Do you think you’ll automate your home? Let’s discuss this in the comments below.