Even for those of us who love to travel, getting around in countries where we don’t speak the language and often can’t even read the alphabet, can be stressful. However, funny signs in Southeast Asia can help ease our angst.

Warning: Do not read this if you are consuming a beverage you do not want to see coming out your nose.

As Southeast Asia has become a “must see” tourist destination, the locals have tried to help us out by posting helpful information in English — with varying degrees of success. Usually, we can get the gist of what they are trying to communicate, but sometimes — not so much. On the other hand, at least they try. I haven’t seen too many signs in Thai or Laotian at the Liberty Bell in my home town, Philadelphia.

I’ve even found a few head scratcher signs in Hawaii .

Here are my favorite funny signs in Southeast Asia that I spotted during stops in Thailand, Laos, Cambodia, Vietnam, and Singapore.

At the main Wat (Buddhist Temple complex) in Chiang Mai, Thailand, there was this warning: 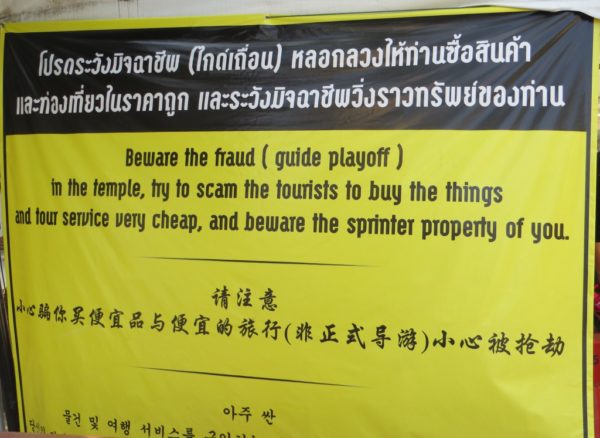 While you are trying to figure out what this sign says (why are the guides having a playoff game?), chances are some one might have sprinted away with your property.

Then, there was this one in Singapore: 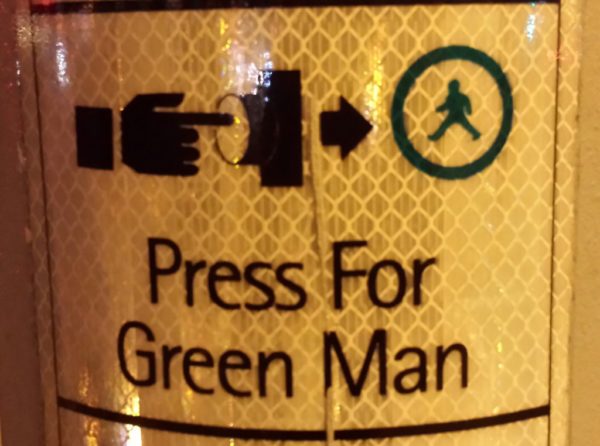 In Singapore, you might not be allowed to chew gum, but you can get a green man — I’m not sure if other color men are available.

To get to Southeast Asia, we had to change planes in Manila in the Philippines. I’m not sure what happens if you actually do fall while waiting in line at the Manila International Airport.. At least they’re polite about it.

I realize there is mystery in religion, but this declaration at a Buddhist temple in Luang Prabang, Laos still has me scratching my head. Maybe it’s a test and you can forget about Nirvana if you don’t “get it”.

We have the next funny sign in Southeast Asia courtesy of my husband (Mr. Excitement). It was over the urinals in the mens’ room at the Royal Palace in Bangkok, Thailand. He was very brave to risk a photo. They’re pretty strict in the Royal Palace complex — lots of gun toting soldiers and signs telling you not to take photographs. It might have been difficult to try to explain to a Thai judge exactly why he was taking photos — in the mens’ room. 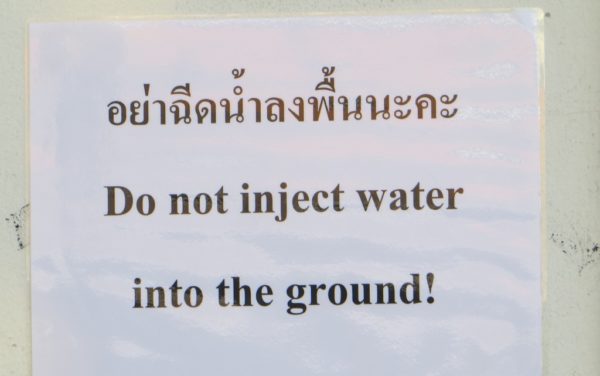 I think what they are trying to say is, “Our aim is to keep this bathroom clean. Your aim will help.”

In the caves at Halong Bay in northern Vietnam, they could maybe use a little help with prepositions. 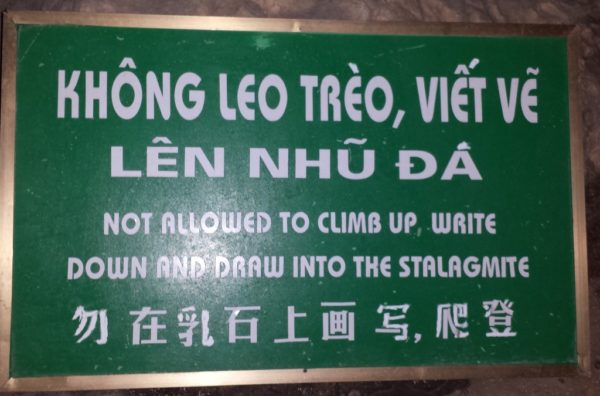 In other words, leave your gang sign somewhere else — or else!

Finally, here’s my favorite from the back of the door rules and regulations at the Manichan Guesthouse in Luang Prabang, Laos.

I told Mr. Excitement not to bring his prostate to Laos, but did he listen?…… I guess we could have tried the “but we weren’t making sex movies” defense.

I assure you, this is all in good fun. The people we met during our travels in Southeast Asia were kind and welcoming. As Google Translate improves, I suspect funny signs in Southeast Asia will become an endangered species and we will enjoy fewer giggles.

Have you experienced any amusing language-based incidents during your travels?

Travel memories often populate my dreams. I suppose that's not surprising given that travel usually takes us out of our...