Movies Based on Books You’ll Love

Movies based on books can be favorites of fans and critics. Here’s a list of movies coming out over the next year based on novels, mysteries, graphic novels, YA fiction, and children’s books. Double dip–read the book, then see the movie!

Please note that some links are affiliate links. That means that if you click through and buy, we receive a small percentage of what you would spend anyway. 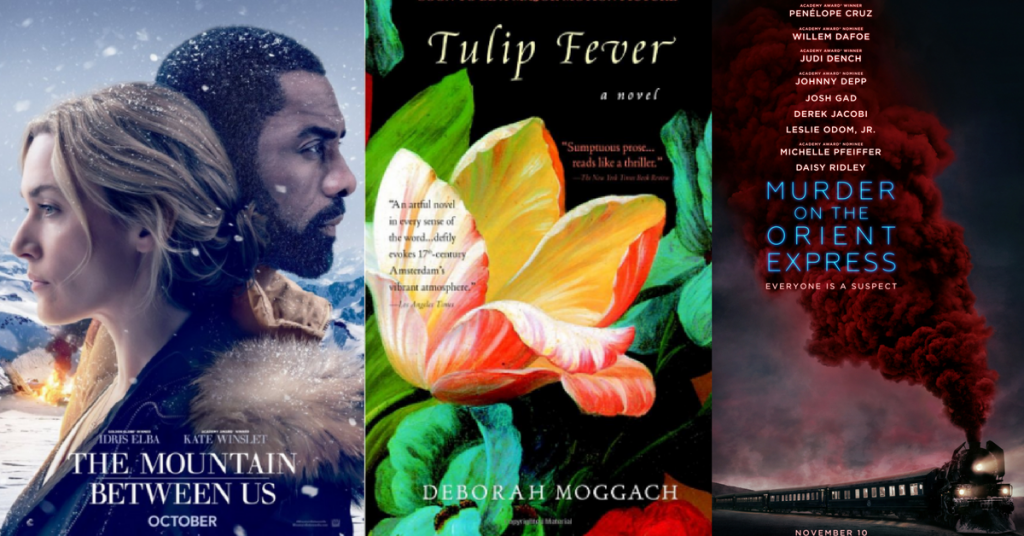 Movie based on The Glass Castle: A Memoir by Jeanette Walls. Stars Oscar-award-winning actress Bree Larson. Release Date August 11, 2017. This movie is currently in theaters.

Movie based on the book Tulip Fever: A Novel by Deborah Moggach, starring Alicia Vikander. Release Date August 25, 2017. This movie is currently in theaters.

The movie based on The Dark Tower series by Stephen King stars Idris Elba and Matthew McConaughey. Released August 4, 2017, The Dark Tower is currently in theaters.

The movie based on the book The Yellow Birds: A Novel by Kevin Powers stars Jennifer Aniston. Released at the Sundance Film Festival, it doesn’t seem to have had wide release yet.

The movie based on the best-selling novel It by Stephen King looks to be an exceptionally scary movie! The young cast is reported to be spectacular. It the movie will be in theaters September 8, 2017.

Based on the novel Their Finest Hour and a Half by Lissa Evans. Starring Gemma Arreton. Described as a mix of 30s screwball comedy and World War II-era patriotic movie.


Same Kind of Different as Me

Based on the book Same Kind of Different As Me: A Modern-Day Slave, an International Art Dealer, and the Unlikely Woman Who Bound Them Together by Ron Hall and Denver Moore. The movie stars Renée Zellweger. Release date October 20, 2017.

Movie based on the best-selling YA novel Stargirl. From Amazon: “A modern-day classic and New York Times bestseller that celebrates the power of individuality and personal expression from beloved Newbery Medalist Jerry Spinelli.” Film release TBD.

Movie based on Red Sparrow: A Novel by Jason Matthews. Film release TBD.

Movie based on the book Let It Snow: Three Holiday Stories by John Green, Maureen Johnson, and Lauren Myracle. Let It Snow the movie is set for a November 22, 2017, release date in theaters.


Ashes in the Snow

Movie based on the novel Between Shades of Gray by Ruta Sepetys.
The release date is not yet set for this movie.

Movie based on Annihilation: A Novel (The Southern Reach Trilogy Book 1) by Jeff Vandermeer. Annihilation the movie stars Natalie Portman and Oscar Isaac.
Annihilation will be released n 2018.

Movie based on The November Criminals by Sam Munson stars Chloe Grace Moretz and Ansel Elgort. Release date for the film is December 12, 2017.

The House of Tomorrow

Movie based on the novel The House of Tomorrow by Peter Bognanni. This coming of age tale pairs a homeschooled boy raised on the wisdom of Buckminster Fuller and a recent heart transplant recipient. The release date for this movie is in 2018.

Movie based on the novel Victoria & Abdul: The True Story of the Queen’s Closest Confidant by Shrabani Basu. Starring Dame Judi Dench as an elderly Queen Victoria at the time of her Diamond Jubilee, and Ali Fazal as Abdul Karim. The tail of an unlikely friendship and a mango.
Victoria and Abdul is rated PG-13, and opens on September 22, 2017. Purchase tickets here.

Murder on the Orient Express

Based on the Hercule Poirot mystery Murder on the Orient Express by Agatha Christie. The newest version of one of the greatest mystery novels of all time is in theaters November 10, 2017.

I’m a huge Christie fan. I re-read the book every five years or so and have seen the original 1974 film version multiple times. The new movie holds no mystery for me, but I’m very excited about the all-star cast and the beautiful setting.

Check out CluesAreEverywhere.com, a special site promoting the movie.

Based on the graphic novel My Friend Dahmer by Derf Backderf.


Thank You for Your Service

Movie based on the novel Thank You For Your Service by David Finkel. The movie stars Miles Teller and Haley Bennett. The release date for this military drama is October 27, 2017.


The Mountain Between Us

Movie based on the novel The Mountain Between Us by Charles Martin stars Kate Winslett and Idris Elba. This action/adventure drama premiers in theaters on October 6, 2017.

Movie based on the novel The Long Home by William Gay stars James Franco.

Movie based on Break My Heart 1,000 Times by Daniel Waters.

Movie based on Ready Player One, has a March 30. 2018, release date. Directed by Steven Spielberg and starring Tye Sheridan, this movie is a potential blockbuster.


Movies based on books can be hit or miss since one medium doesn’t always transfer into another. Still, the benefit of moving from page to screen is a well-thought out plot, developed characters, and a satisfying story arc.

A few months ago, my Travel Tuesday post was an interview with travel blogger, Billie Frank, with pointers for visiting...