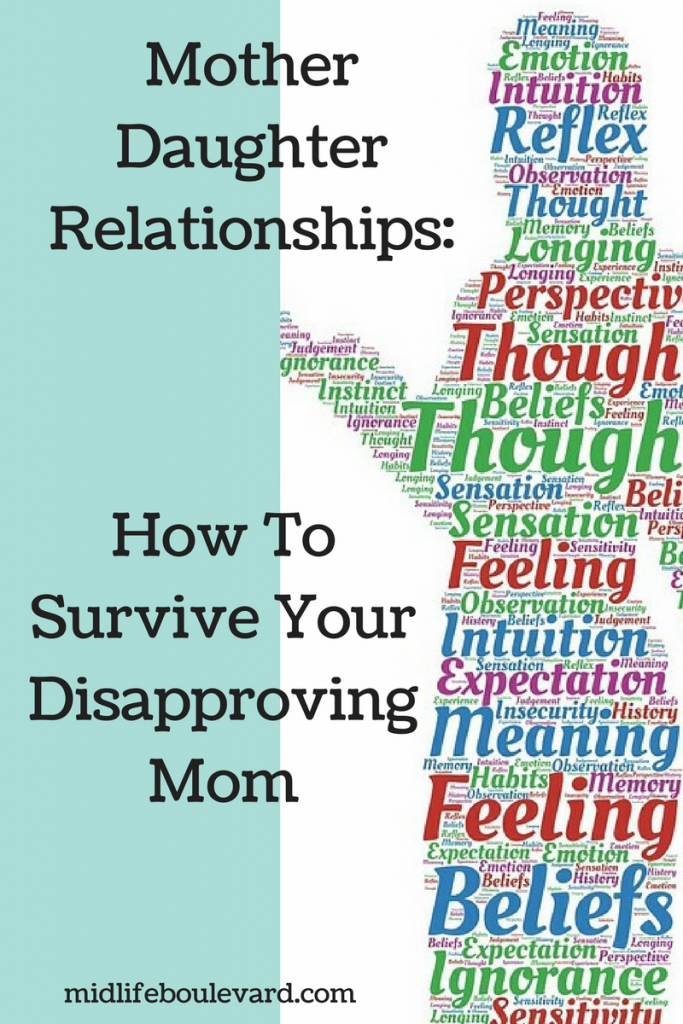 Sometimes a childhood scene stays in your mind.

Then later, in midlife, you make connections, and recognize it was the beginning of a lesson learned.

I was maybe eight or nine, as I watched my mother walk gracefully into my grandmother’s sitting room, where Nanny sat knitting in her rocker. I was quietly hoping I would be offered a cold Coke, as was my grandmother’s habit, but was at the moment swallowed up in Grandaddy’s huge leather chair. I don’t remember the subject that was being discussed, but suddenly, I heard Nanny state sharply to my impeccably dressed mom, “Your skirt’s too tight.”

My mother’s whole demeanor changed. What had been airy and light-hearted turned uncertain, and a little defensive.

I recognized my mother’s desperate need for her own mother’s approval. I saw her as a daughter. I felt her vulnerability. I was confused, and a little mad at Nanny for what I’d seen.

My mother grew quiet. I’m not sure I ever saw that skirt again.

Forward time until you reach me in my mid-40’s. I’m walking down the long center hall to my parents’ bedroom, and can see my mother sitting, as she always did, in her own chair. I had on my usual jeans and sweater, but was wearing heavy boots. Our move to the Ozarks had led me to enjoy hiking around the surrounding mountain trails, and these were a new addition to my rather laid-back wardrobe.

Once I reached my mom, she remarked, quietly, “Those boots don’t look like something you would wear.” The criticism was more subtle than my grandmother’s, and I wondered if I was being too sensitive.

I laughed, which was (and still is) my go-to defense. “Oh Mom, I’ve become quite the mountain woman now that I don’t live in Dallas anymore.” She didn’t particularly think that was amusing, and continued frowning. She had been waiting years for me to dress more… appropriately.

One more forward, but now, only a few weeks after that particular conversation.

It was morning, and I was getting dressed for the day. I reached for the boots.

I heard a voice, loud and clear. My voice, not my mother’s.

“You look stupid in these. You need to wear a heel, because you’re short. How could you not care about the way you look?”

Tears came to my eyes. I made the connection immediately.

I remembered the scene between my mom and her mom.

I shoved the boots on my feet, lacing them up tightly. I was 45 years old. I wasn’t going to stay quiet, at least in my own head.

Daughters have a hard enough time, separating their identities from their mothers. There are many patterns of relationships, each having its own challenges. A relationship can be what is termed “enmeshed,” where there is little boundary between mother and daughter. These are particularly difficult to recognize, because they can look like the daughter is being loved very well.

When teenage daughters separate emotionally from their moms, it, at times, isn’t a pretty sight. Our teenage years can be filled with screams of, “I hate you,”or, “You’re the worst mother in the world,” in an attempt to distance. When all goes well, those bonds can be renegotiated, words forgiven, and mother and daughter enter another healthy phase, one where their differences are respected.

Yet for some, that separation is never quite completed. Even in midlife, you can struggle with trying to have your own identity. You attend the church she does. You stay married to someone who is abusive because she would never approve of a divorce. You have to call or text her several times a day to avoid her disappointment. You change clothes before you see her. You feel you have to include her in everything you do.

You pick through the truth of your life, and only tell her what you believe she can accept.

And even worse, you feel guilty for doing it.

It can be made more complicated if your mother has significant mental illness, a personality disorder, like borderline, or strict religious differences that will impede the relationship. Truly vicious things can occur if those boundaries are challenged or questioned.

Yet when you do, you can begin to change. It takes practice, and compassion for yourself. It takes realizing that your own mother may never have felt that approval, so she doesn’t know how to give it. It takes support from others who will help and listen. It takes the recognition that your mom can’t give what she doesn’t believe in, or what she doesn’t understand, and you’ll be okay.

You have to pull on your proverbial boots and lead your life, for you.

Recognize that you are separate from your mom, and that your behavior and choices reflect who you are as a person. You may not get permission from her for this growth, but it’s vital.

For you. For your children. For any relationship you might have.

And maybe, just maybe, she’ll get it.

If not, you’ll have some grieving to do. But you’ll enjoy those boots.

You can read more of Dr. Margaret on her website, drmargaretrutherford.com.

I have a fantastic therapist. I've told him about my suicidal tendencies. But he's $100 an hour. I can only see him once a month. If that. My new husband is my life line. He runs home from work any time I'm feeling this way. I still struggle day to day. But I remain thankful.

Margaret, as you noted in your reply to Kristin, far too many of us have those experiences with our mothers. Mine is being tested now as I begin the caregiving role. The good part is that I have become very self-aware and work on defenses to protect my feelings! Thanks for putting a personal spin on this.

That sounds like it's going to be quite a challenge Walker. I watched it between my mom and hers. It makes grief much more complicated in many ways.

The outpouring of comments and private emails I receive when I write about mothers with darker personalities is astounding Kristin. I'm so glad you had a healthy mom. It's a true gift. Thanks for writing.

Reading about disapproving moms makes me super grateful I grew up with a wonderful and accepting mother. I never really felt punished or disapproved. I was always told I can do whatever I wanted in life.

I've been suicidal because of my mother's control and inability to accept me. She is very religious, but I think it's all an act for her to appear good. Sadly, I am 44 and I just cut ties with her a few months ago. She asked me to talk to her but I told her it would be in intensive family therapy. She sternly rejected therapy claiming her religion will heal everything. My brother passed away a year ago. My only sibling and best friend. I'm a stupid mess!

HI Shelby. I'm glad you're aware of how this break is affecting you, or perhaps how the whole relationship has affected you. Add on to that emotional loss, the death of your beloved brother, and that can be overwhelming. But suicidal thoughts are nothing to discount. If your mother won't go into therapy with you, please seek help yourself. It's so hard when a more conservative religious approach prevents someone from being vulnerable with another human being. I'm sure your brother would want you to take care of yourself, first and foremost.

Shelby, I'm so sorry for your loss. I send you loads of strength as you navigate things without your brother in your life. ((hugs))