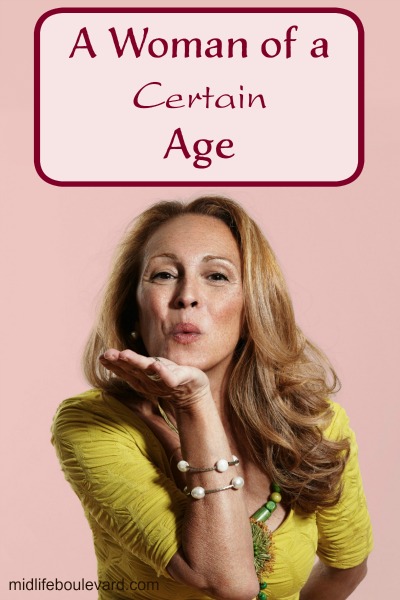 I remember the first time it happened.

I was playing the role of a lifetime. Desiree in “A Little Night Music” by Stephen Sondheim. She’s the one who sings, “Send In The Clowns”, an utterly beautiful piece of writing. The orchestra was wonderful. The cast, full of energy and excitement.

I was immensely honored.

One of the younger members of the cast wrote me a note on the last night. She was a 20-something girl with an exquisite operatic voice, who was headed to Europe to study.

I was very touched, but also had to chuckle to myself. I was 44. I considered myself to be in the prime of my life — invigorated, energetic. Not old enough to be a model for healthy aging.

I guess she could have thought, Heck, I hope I’m not like her when I get to be in my 40’s. She might not have expressed that in a note, but she could have felt that way.

And I was asked in a doctor’s office the other day if I was on Medicare.

Ouch. “No, not yet” I said, in as spritely a voice as I could muster after a particularly painful procedure.

Even though that stung a bit, I realized something has changed.

I have been lucky to have fabulous role models in my life. One of the best was my adopted grandmother, Ethel. I called her Et, for short. She was actually my biological grandmother’s 3rd cousin. But she let me claim her as a grandmother. When I came into her life, she was 84. She had already buried her husband, her only son, and one grandson. Yet her engagement with life was phenomenal. We sat together for hours and talked. And she taught me many things.

Here are a few.

“If you get invited, go. If you stop going, you will stop being included.”

“The most important thing to do after you turn 80? Put your feet on the floor and get out of bed.”

“Don’t let other people tell you you can no longer do things, like carry groceries up the stairs. Sometimes your children are the worst about that.”

“After you are 90, look at yourself in the mirror in the morning, and say, ”Good morning, whoever you are.”

“Always have friends that are younger than you. They will keep you young.”

She turned 100 the year I had my son. She was much more excited about his birth than her own arrival at the centennial mark.

Maybe that’s what she really taught me. It was her interest in others that kept her so vital. She only occasionally talked about her own struggles.

After she had a mild stroke, she told me, “It was like I saw part of my mind fly away. And I couldn’t reach it.”

As I saw her move from a fairly large apartment to smaller ones, and finally to a nursing home, she would talk about watching the clouds — something she loved to do. As her windows lessened in size, she noted, “The window may be a little smaller, but they are the same clouds.”

Every time I look at the sky, I think of her. And smile.

I welcome trying to be someone’s Et. Those will be very hard shoes to fill.

But I will treasure watching the clouds.

I love the relationship you had with your chosen grandmother and her nuggets of wisdom. I'm at the point you've mentioned where I'm transitioning to being the older person. I've struggled with that for quite sometime and have concluded that I'd be proud to be thought of in the same lines as Ernestine Shepard.

Sounds like we have come to similar conclusions. I don't know if I can adopt all of what she showed me -- she used to drink warm lemon water in the morning. I know it's good for you but am not sure I can pull that one off. Maybe that's why she lived so long!

What a beautiful challenge -- I enjoyed all the things she taught you. "Aging gracefully" is as you described. You age but don't 'act' it!

She was phenomenal Carol! So glad you enjoyed.

Love this article...and what a wise woman your Et was. My mother in law turns 98 in two days, and while she has slowed down a lot and is in early dementia, she is still a firecracker...kind of like the EverReady bunny...she just keeps going. I love this woman and I learn from her how I want to be as I age (I'm 68).

What a fabulously inspiring role model Et was!

This is so beautiful! I love that all 13 of my grandkids think I am fabulous and I pray they always will.

That's wonderful Doreen! They are a lucky 13!

5 Things I Enjoy About Getting Older

Getting older has connected me with some incredible people. Last year I joined a group of bloggers, The Women of...