Skip to Content
0 shares
While picnics, barbecues and retail store sales are a nice diversion, spending part of the Memorial Day holiday honoring the intent of the day, is what matters most.

For last year’s Memorial Day, we were visiting my parents at their retirement community in Sun Lakes, Arizona. My mom is a member of Daughters of the American Revolution (DAR) and her chapter was one of the sponsors of the local Memorial Day Service along with seven other Veterans Organizations. The hour long program featured placement of memorial wreaths by each of the groups as well as a guest speaker, Colonel Sam Young, past commander of Luke Air Force Base and a member of the Arizona Veteran’s Hall of Fame.  A highlight of the event was watching all of the 70, 80, and 90 year old veterans wave their hands during a rendition of Lee Greenwood’s, “God Bless the USA,”

After, they solemnly saluted during the final Echo Taps. Their  respect and patriotic dedication was really moving and heart felt.

Having the program presented in a retirement community, I knew that there were going to be a lot of veterans present. As I helped the DAR ladies pass out mini American flags to the guests, I was able to also strike up conversations with some of the veterans and hear their experiences. The first gentleman I talked to was a World War II veteran, one of the greatest generation that is dwindling down to a very few. He served in the Pacific, a member of the Air Force, working on several battle ships. Next, I met George, a Vietnam Vet, serving in the 1st Cavalry of the Army. He said it was really hard for him to attend events like this but that he goes to show respect for his fallen comrades.

Ken Baker was an outgoing Vietnam Vet who served in Da Nang in the Air Force. He was stationed in the middle of Vietnam, near the DMZ. George was anxious to explain to me the meaning of the ribbon that adorned his cap. The ribbon, known as the Vietnam Flag Ribbon, is worn by those who served “In Country,” and depicts the South Vietnamese flag. Theyellow represents the color of the skin of the Asian people.  The threeredstripes represent the three sections of the country: North, Central, and South Vietnam. Thegreen stripes were added to represent the American government who supported the South Vietnamese cause. 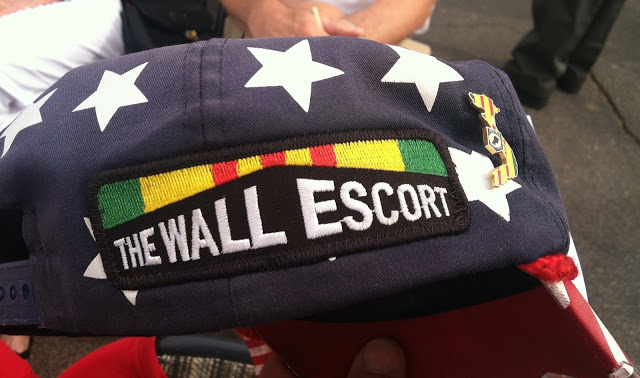 Sitting behind me were two patron members of the Jewish War Veterans. One of the gentlemen, Mr. Goldman, shared with me that the Jewish War Veterans was the first and therefore oldest veteran’s organization, having been formed in 1896. Because there are so few World War II veterans left, these non-military patron members’ duty is to support the veterans in  every way. 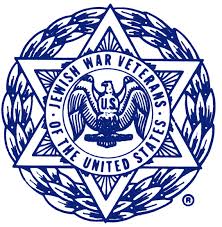 I couldn’t help but notice a vivacious woman veteran, Cheryl Almond. Ms. Almond served during the Vietnam war in the Air Force in the intelligence forces. She was stationed in Thailand and was responsible for reconnaissance and search and rescue missions. She told me that of the 14,000 women who served during the war, only 714 were non-medical like herself. I asked Cheryl how she came to serve in the Air Force. She said it was because of the example of her parents. Her father was a medical doctor who arrived in Nagasaki, Japan nine days after Japan’s surrender to help give medical aide to the POW’s. Her mother was one of the original Rosie the Riveters during the war. From her parents, Cheryl learned that, “Serving is Ops Normal.” She said it was very rewarding to serve in the Air Force and later with the Red Cross. 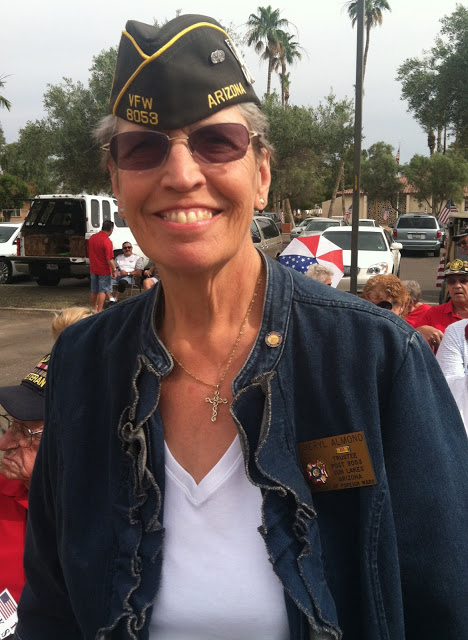 The message of the day was clearly Freedom Is Not Free. As Mr.Baker put it, “The cost of freedom is R.I.P.” The speaker, Colonel Young, ended his remarks with these thoughts:

It is the VETERAN, not the preacher, who has given us freedom of religion.

It is the VETERAN, not the reporter, who has given us freedom of the press.

It is the VETERAN, not  the  poet, who has given us freedom of speech.

It is the VETERAN, not the campus organizer, who has given us freedom to assemble.

It is the VETERAN, not the lawyer, who has given us the right to a fair trial.

It is the VETERAN, not the politician,  who has given us the right to vote.

It is the VETERAN, who salutes the flag and who serves under the flag.

I wish I had the chance to talk to more of these great men and women. I’m sure each one had a great story to tell. The real lesson I learned yesterday was who are the true heroes among us. It is our veterans. So, if you love your freedom, remember to thank a vet.”

How will you spend your Memorial holiday?

Read more from Caryn the Midlife Guru on her blog

I love to spend these kinds of holidays relaxing with family but first I think it's important to teach my daughter about the reason for the holiday! :)

20 Best Things About Having Parkinson’s Disease

Vikki Claflin from the blog, Laugh Lines, is one of the funniest women on the web. Don't take our word...