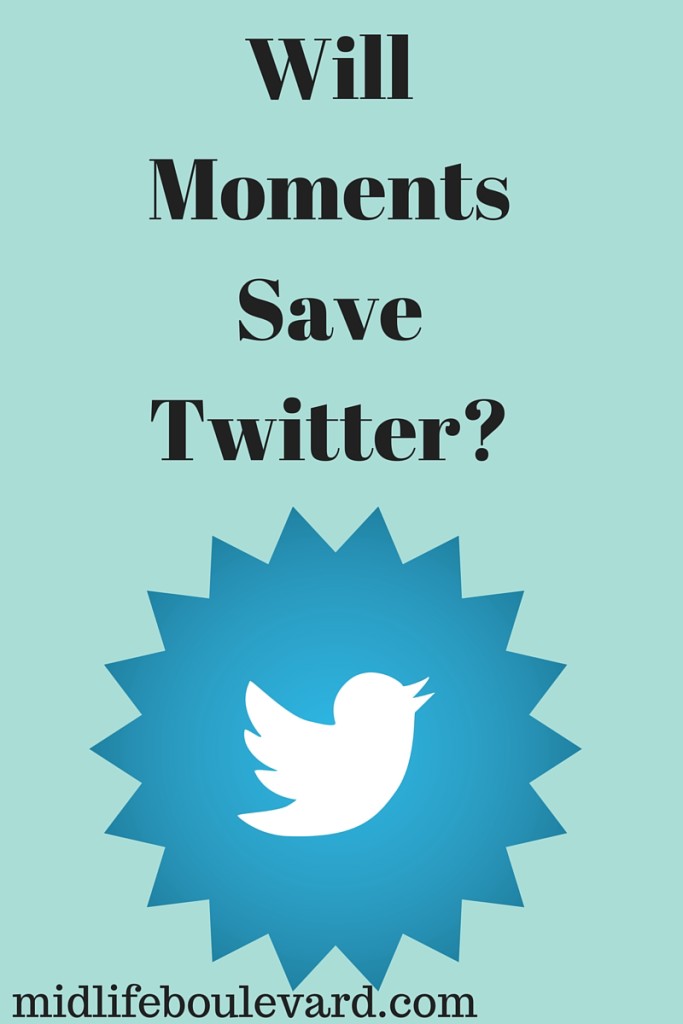 These Are the Moments of Your Life.  Just Kidding …

For people involved in the tech world, Twitter’s new “Moments” feature came as sort of a shoulder shrug. It had been so hyped since spring 2015 that the expected “OMG!” response was tempered to “Hmm.” Some reviewers lauded Moments as the best addition to social media since, oh, I don’t know, whatever. Others conjectured that Moments might confuse users and drive them away.

Moments is actually pretty cool, but many people I know are a bit bewildered. Several friends, in fact, haven’t even clicked on (or, um, noticed) its bolt-of-lightening icon in the Twitter toolbar. I get that. I also completely understand that people don’t know quite what it’s doing in Twitter because, at first glance, Moments has little to do with the way most people use the platform. I have no statistics here, but I venture that many people use Twitter as a messaging app, albeit a public messaging app, but a messaging app nonetheless. Moments does not give you messages. It provides instead a “curated” stream of information on various “trending” topics.

Here are some questions people have asked and my good faith attempt at answers.

Q. Who is curating Moments?

A. Twitter claims that the people picking what to put into Moments are neither reporters nor creators of original content. Individual Moments are also free of bias, according to Twitter. However, when you click on a Moment, you get a lot of information, the same way you do when you click on a trending topic in Facebook, or Apple News for that matter. I don’t think I’m divulging any classified information here, but I know that for the past year or so Twitter has been hiring lots of journalists. I think they may be creating Moments and just not calling themselves journalists for this gig.

Q. What kind of information can you find on Moments?

A. Moments are little news digests. You can always choose between “Today,” “News” “Sports,” “Entertainment” and “Fun.” Click on any moment and it expands to give you an introduction, title, and description. Then you’ll see relevant Vines, videos, images and animated GIFs. If the moment you have chosen is something happening right now — like a World Series game — you have the option of “following” that moment and pertinent tweets will start showing up in your Twitter feed. When you aren’t interested anymore, then you unfollow. It works kind of the way Twitter Lists do in that you can see tweets without actually following the account that is tweeting.

Q. So who is giving Twitter the information that goes into Moments.

A. Right now Twitter is working with several “media partners,” like Buzzfeed, Bleacher Report, Vogue, the New York Times, Fox News and Mashable. However, that does not mean that Moments will necessarily use or feature information given to them by these partners. So, in a sense, that policy protects Moments from being another outlet for a media source and helps shore up their purported lack of bias.

Q. Why do you say Moments is cool?

A. To answer this, go to the Twitter app on your phone. (Moments is also on your computer, but it’s niftier on mobile.) Swipe left and you will get a list of Moments. Scroll up or down for other Moments in that “category.” If anything peaks your interest, tap on that and you’ll get more information and visuals by continuing to swipe left. Tap on the X in the upper right hand corner to get to different moments. Basically, Moments is an easier way to follow a “trending topic” than clicking on a “trending topic.” It cuts through the clutter and noise you’ll find on a Twitter Stream. Moments also seems women-friendly as it isn’t full of the kinds of things young males especially like on digital.

A. I’ve heard it said that Moments was supposed to bring to Twitter people who didn’t really understand Twitter. But so far the hoards aren’t coming onboard for what is basically another news app; Twitter’s growth is still stagnant. That’s unfortunate because Twitter fuels news, entertainment and branding. Moments is fun to use as a quick way to stay up-to-date with the world in the morning over coffee or before putting your head on the pillow at night.

Right now I think the best thing about Moments is that it is a parallel universe that barely touches on the way I mostly use Twitter (which is to find information, relay information and talk to people). Compare it to Instagram, which operates in its own sphere although Facebook owns it. But just as you can share an Instagram photo on Facebook, you can . . . wait for it . . . share a Twitter Moment on Twitter. That means more (and perhaps better) content. For any social media platform, that’s a winning formula. I’m hoping it catches fire.

What Not To Say To Someone With Hearing Loss

It happens sometimes. A friend or colleague is telling me a funny story or explaining an event that happened, and...