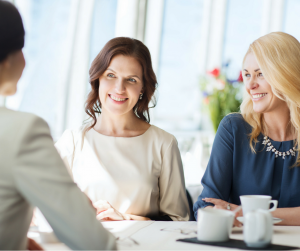 Shari Eberts can be found sharing stories about her life on Living With Hearing Loss, where this piece on how to lipread was originally featured. You can also find her on Facebook and Twitter.

Know How to Lipread?

Do you lipread? I do. Most of the time, I am not aware of it, but I know I must be doing it, because it annoys me terribly when people cover their mouths when they speak!

I have gotten quite skilled at it over the years, because the other day at a meeting a colleague across the table from me made a quiet comment and I “heard” it. When I asked her about it, she replied, “You must be a very good lipreader, because there is no way you could have heard what I said.” Interesting.

My children like to play lipreading games with me. It is good practice for me, because they keep making it harder and harder until I am stumped. That, of course, is their favorite part. One night on a recent vacation, they decided to try a lipreading-only dinner.

The people at the tables next to us must have thought we were crazy.  Our kids moved their mouths with no sound coming out and then I replied with my voice. Half the time the kids would burst out laughing at my response. It ended up being a lot of fun.

First off, the name of the restaurant was tricky. It was called Vista Mare, but I kept thinking they were saying, “Kick the ball.” They would ask me, “How do you like Vista Mare?” and I would answer, “What type of ball?” Peals of laughter followed. Eventually they pointed to the name on the menu so I figured it out.

Our discussion of the beautiful sunset went smoothly — “What a beautiful sunset,” and “Let’s take a picture,” were pretty easy, especially since it was a stunning evening in paradise. Talking about what we might order was also simple, since the menu was right in front of me to scan. Plus, my children always order the same thing at an Italian restaurant, so I didn’t even need to read their lips to know what they were saying.

When we moved onto movies and popular culture, it got tricky. I could handle Star Wars and some discussion of the upcoming new movie — “Would Luke be in it? Was Kylo Ren related to Luke? Should we see it on opening day?” Even discussing Matt Damon in Martian was fine, but then they moved on to Benedict Cumberbatch. To be honest, I didn’t even know who that was, but apparently he is a famous British actor that has been in many movies.

“Did what have an escape hatch? I asked. “Is someone walking down a lumber path?” I tried. I’m not sure what a lumber path is, but you never know. “Are they bending in a cummerbund?” Then it was my kids’ turn to have no idea what that was. I guess we haven’t taken them to too many black-tie events.

They could not get enough of this hilarity, and there were no clues they could give me because I had never hear of this guy. (Sorry Benedict…) They eventually had to cheat and say it out loud.

The Importance of Lipreading

Lipreading games can be fun, but they are also good practice. Lipreading, or speech reading as it is sometimes called, is an incredibly important skill for those of us with hearing loss, and one that I seem to rely on even more than I know. But as the games with my kids show, lipreading alone is not enough. It is the combination of the sounds and the lipreading that is most powerful.

The games also showed how much energy those of us with hearing loss use in every communication situation. Not only are we using our ears to hear, but our eyes to lipread, and our brains to put it all together into something coherent. Once we figure out what the person has said, we are not done, because then we need to reply!

Nevertheless, I am very grateful for my ability to lipread and may take a class to improve my skills. And of course keep practicing with my kids.

Readers, do you lipread?

Can you advise me as to how you would find a lipreading course? Where would I start? Thank you so much.

It is harder than it should be. I would start by asking your audiologist or ENT if he/she knows of any. You can also try your local government agencies for the disabled. I live in NYC and it has been very challenging to find one surprisingly. Good luck to you!

Try a lipreading class! They are great fun, and you learn to lipread lots of people, as well as learning tips and communication tactics, and about equipment and organisations that can help.

Speechreading - a better description of the process - without context will always be hit and miss. We use visual cues from the eyes, jaws, lips, body language and knowing what the topic is (context). Speechreading is not an effective stand alone communication strategy, but a crucial one that is boosted by amplification and other technology and environmental modifications.

I notice that momma does this to a certain degree, but I can see the benefits for everyone. I also think knowing sign language is important. My daughter has been teaching my two year old grandchildren and they are in turn teaching me!

Sign language can help too -- particularly finger spelling if there is a particularly difficult word to understand. Thanks for the suggestion.

Stay Fit Over Fifty Sue Loncaric can be found at Sizzling Towards Sixty where she shares stories about aging with...