Camille blogs regularly at camilledeferthompson.com. This post was originally featured there.

Sue proved a skillful forger. The note I dictated to my good friend and co-conspirator passed the scrutiny of the school secretary. I fixed my eyes on the floor as I handed it to the stiff woman behind the counter, and mumbled something about a sore throat I had suffered the day before. Peering at me over the top of her half-specs, she lifted an eyebrow then shifted her gaze to a pink absence slip, printed my name in the space at the top and slid it across the counter.

I had never cut a single class before, let alone a whole day. But hey, I was a senior. It was about time I exercised my independence. Liberation was the battle cry of the era. Protesters marched in the streets, promoting love, peace and freedom. I resolved that day not to be ruled by The Man.

Careful not to display my glee, I tucked my get-out-of-jail-free pass into my beaded jute macramé purse. The golden ticket! Fooled them all! Ha ha!

My head held high, I strode up to my teachers’ desks that day, presenting each with proof of the legitimacy of my phony absence. Clueless losers. 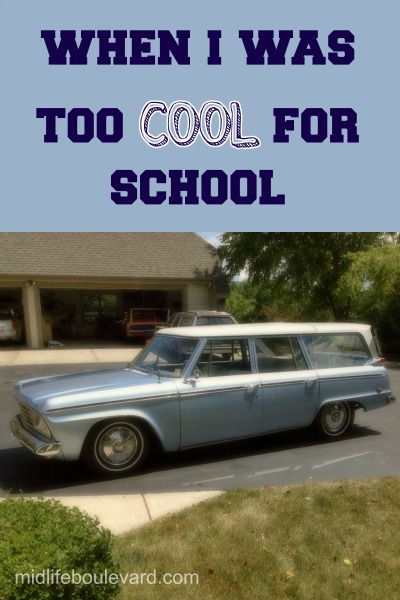 The next morning, while ratting my hair, I heard my mother’s voice from the dining room, where I had left my purse  the night before.

“What’s this?” she said, waving the rose-colored tattletale.

Crap. I’d put all my effort into deceiving my teachers, not once considering the possibility of Mom discovering my ruse.

Summoning every ounce of adolescent indignation, I replied, “Hey! What’re you doing in my stuff? That’s my personal property!”

“I was giving you lunch money.”

Hard to craft a clever comeback for that. My super human powers evaporated as Mom continued her rant.

“If I ever catch you cutting school again, I’ll drive you there myself until you graduate!” she said, crumpling the evidence of my offense and tossing it in the trash.

The idea of being dropped off in the boxy humiliation-mobile, the family Studebaker, accompanied by a squeaky kiss on my cheek from dear old mother – in my senior year, no less – was more than my new-found independence could withstand.

My passionate love affair with freedom had come to a sudden, heartbreaking finale.

I never cut class again. The school never learned of my folly. I graduated with my dignity intact.

Footnote: My friend and co-conspirator, Sue, a willing accomplice 40 years ago, has disavowed any knowledge or involvement in the episode. How does she sleep at night?

Six Ways To Support A Friend With Cancer

Pennie blogs over at The Accidental Blogger. This post was originally published there. Your friend has cancer. Every genuine, heartfelt...