Rebecca blogs over at From Where I Sit. This post was first published there earlier this month.

A few weeks ago I was invited to a seminar on dealing with loss during the holidays. Although I was interested in the topic, it was its title that sealed my attendance:

I would have never imagined those two words—grief and grace—in the same sentence together. In my experience, grief has been a disturbing and painful foe, something most of us struggle to manage. Grace, on the other hand, is welcomed, an “unmerited kindness,” as my father liked to call it,—something we can either seek or give that’s comforting and soothing.

What a fascinating thought that one could help us get through the other. 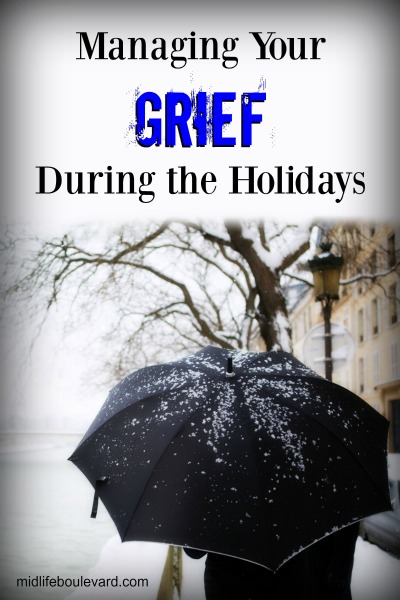 At the conference room entrance, I was greeted by a comprehensive display of books and literature on grief including counseling services, support groups, workshops, and even a calendar of special events. It dawned on me as I was maneuvering my wheelchair underneath one of the twelve large circular tables, that I’d never attended a lecture on grief from a professional. Our presenter’s credentials were impressive with a string of letters behind her name that indicated advanced degrees in addition to her almost two decades of work experience in hospice and bereavement management. Her organization served more than 750 patients—daily.

The tables filled quickly. More chairs had to be brought in. The mild hum of pleasantries hushed as the speaker introduced her topic, one we’d learned she’d lectured on dozens of times before.

Yes, I’ve been through quite a few losses, some deep valleys, and there have been times when I wondered if I was going to make it. But, grief, as evidenced from the tissue-topped tables to the calendared events to the well-rehearsed lecture, was far more than just a personal journey. It is its own entity that deserved to be licensed and managed and serviced.

I started to wonder. Had I done it right?

When I was twenty, struggling to deal with the death of my seventeen-year-old brother, I remember being introduced to Elizabeth Kübler-Ross’s five stages of grief—denial, anger, bargaining, depression, and acceptance. I had trouble remembering what each one meant, much less figuring out my progress.

I slogged through that valley, clueless and uncaring about stages, although I revisited the concept from time to time. But when I was paralyzed by an illness that affects one in a million, and my daughter developed autism when 80% of those affected are male, and my fourth-born second son developed a condition (pyloric stenosis) that is typically seen in first-born males, I started to think that maybe life’s rules didn’t apply to me anyway.

So when the presenter flashed the slide entitled, “Beyond Elisabeth Kubler-Ross—How We Move through Grief,” I swallowed hard and braced myself. What had I missed by ignoring those stages of grief? Would it have made my grief easier?

Thankfully the answer was swift and reassuring.

It’s not linear – no checkboxes.

I exhaled. For me, grief has been anything but linear. Anything but predictable. Anything but the same for people regardless of similar experiences—other than it being difficult, insidious, and unexpectedly a lot of hard work to get through.

Then the presenter began to describe my experience.

We move slowly and tenderly
We feel the reality and pain
We embrace hope, even when life feels hopeless
We manage to adjust and move forward while still honoring (and yes, having a relationship with) our loved one

Tomorrow is the ten-year anniversary of my mother’s death. Once again, I’m not sure what kind of visit I will have with grief. Some years I have cried remembering the last words we shared. Some years I have laughed remembering her hysterics at my father’s jokes that would reduce her to tears and gasps for breath. Most years I’ve vowed to make sure my kids would remember at least one more story about her.

But every year I’ve grieved in my own way.

No right. No wrong. Just mine.

Maybe that’s how we meet grief with grace. Maybe we tenderly accept that foe with an unmerited kindness while allowing ourselves a choice about how we express it.

How about you? Have you found a way to meet grief with grace?

Focus on Confidence in 2016 with Invisalign

People don't believe me when I say I'm shy. Luckily, I love people. I'm a born helper, so setting others...