When we record things that are meaningful in our lives, things we are grateful for and want to honor and cherish — families are often mentioned. But if we are fortunate to have children, it is they who truly top the list. Because when we sit around at the dinner table or at a family gathering talking with them or when we hear their voices over the phone — no matter what age they are — consciously or unconsciously they remind us: children are our legacy. At some level they satisfy our desire for generativity, for generating good things and good people. 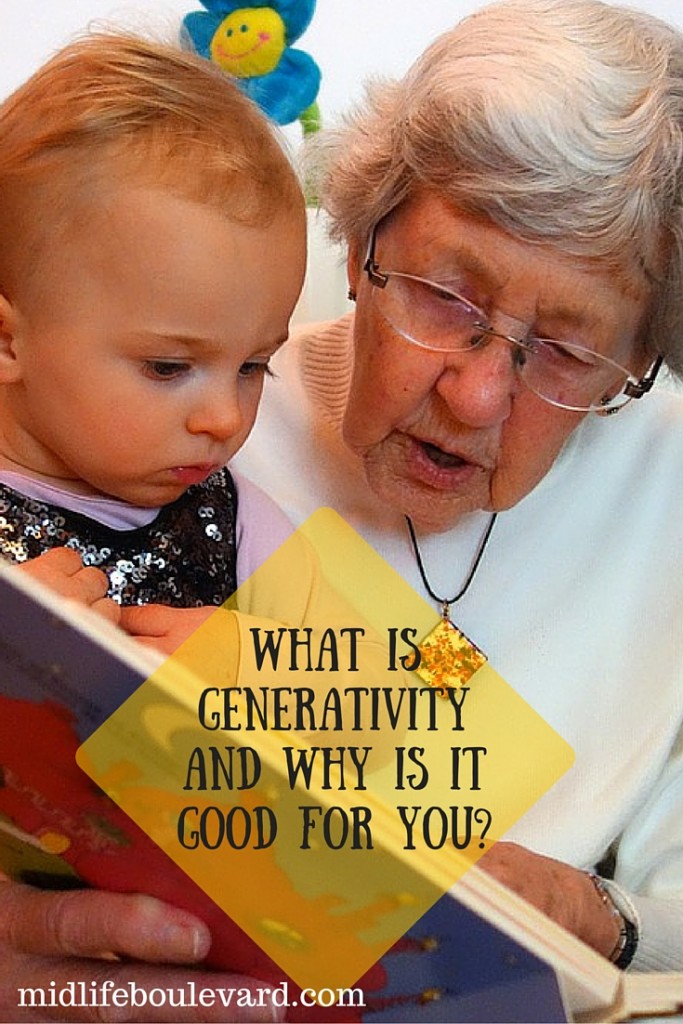 Psychoanalyst Erik Erikson wrote that in the middle years of adult life we come to realize: “I am what survives me.” Though giving birth is the ultimate act of generativity, it is the parent’s follow through, his and her commitment to nurturing and growing this person, that truly counts.

We can all experience generativity by giving birth — by creating a business, a song, a piece of sculpture, a resolution of a problem, a scientific theory, a recipe, an article, a novel, a hybrid rose. Generativity also means creating the very future itself through teaching, nursing, volunteering, voting, forming and helping social institutions like community centers, churches, schools and health centers. In each of these created things resides a part of us and the good in us. Bottom line: what we generate moves into the future and provides for those coming after us. I am what survives me.

Many psychologists confirm that people who want to generate and create, experience feelings of well-being and low levels of depression. Again, that old proverb or saying has profound meaning: if you are feeling sad or lonely, the best cure is reaching out to help someone else. Yes, there might be some ego or need for power in our acts of creation, but when we generate for future generations, we cover over the power with love.

Dan P. McAdams, who with other researchers has done studies about generativity and written many articles, quotes an African Proverb to underline the positive aspects of our desires to leave something behind: The world was not left to us by our parents. It was lent to us by our children.

Erik Erikson further states that when we create and have children and build societies, we indicate a “belief in the species.” Because though daily we know the horrific things that can happen on our planet, we forge ahead regardless, believing in our own generative powers and the goodness that can still exist on our earth for the generations to come.

McAdams states: Research psychologists have developed various ways to measure individual differences in generativity. Keep in mind that generativity is not a personality trait that remains stable over time. People’s generative concerns, behaviors, and goals change over time, sometimes dramatically. And, of course, life is much more complex than these tests can measure. At best, you’ll get a snapshot of your generativity at the current moment — and perhaps inspiration to be more generative in the future.

The snapshot McAdams is referring to are the self-tests he has developed for readers to try. He states that if you are interested in assessing your generative goals, simply list the ten most important goals you are currently trying to achieve. He writes: While many goals have little to do with generativity itself, some goals are generative. For example, a parent’s goal to “save enough money to put my child through college” would be a generative goal. Generative goals involve either (1) creating or generating new things, (2) passing on valued things (such as traditions) from the past, (3) caring for or assisting other people, or (4) establishing relationships with younger people, or the next generation.

McAdams research has found that adults in their thirties, forties, and fifties often list two or three goals that indicate a form of generativity. People in their sixties and older also list as many generative goals as folks in midlife. But younger adults, those in their twenties, most often only list one generative goal–indicating that younger people are more involved with earlier identity issues. They are establishing themselves before they think about leaving something to others.

Now add up your scores for the six items. The researchers in their paper state their findings: that younger people tend to be prosocial and altruistic, whereas adults tend to be generative and thus would have higher scores. Research shows that adults who score high on this scale tend to be more involved in religious, community, and political activities, and tend to report higher levels of happiness and psychological well-being, compared to adults who score low.

Below are some examples of random acts of generativity.
• Read a story to a child.
• Teach somebody a skill.
• Donate blood.
• Attend a neighborhood or community meeting.
• Produce a piece of art or craft.
• Give money to a charity.
• Assume a leadership position in a group.

Thanks to the author of the article: GENERATIVITY:The New Definition of Success

And to Dan P. McAdams for his inspiration.

I’m a baby boomer, member of the hectic sandwich generation. I write <a href="http://boomerhighway.org">Boomer Highway</a> to help slow down the frenetic pace of life. I want to be “Your road to mind-body wellness for a longer life.” A registered nurse and health educator, I am passionate about preventative health measures and women’s health. Together, let’s deal with the snags in the fabric of life that affect our generation, our children and grandchildren. Together we can solve problems, stop racing along the boomer highway and slow down life’s pace. Wouldn’t it be great to navigate the coming decades on a peaceful road?

I’m a baby boomer, member of the hectic sandwich generation. I write Boomer Highway to help slow down the frenetic pace of life. I want to be “Your road to mind-body wellness for a longer life.” A registered nurse and health educator, I am passionate about preventative health measures and women’s health. Together, let’s deal with the snags in the fabric of life that affect our generation, our children and grandchildren. Together we can solve problems, stop racing along the boomer highway and slow down life’s pace. Wouldn’t it be great to navigate the coming decades on a peaceful road?

I loved this. And I love generativity. Thank you, Beth for reminding us for what comes after. Hope this week is treating you kindly. :)

I needed this today. Thank you.

As a fellow writer, you know how good that makes me feel. I do think we more and more realize the importance of loving and giving to others. It is what we will leave behind.

Exercising Your Right to Feel Good at Any Age

Candace Karu is just about the most fit woman we've met. She's passionate about exercise and it shows! Read more...