If you’re an Anglophile like me, the British series The Crown on Netflix has filled a Downton-Abbey shaped hole in our hearts. The ten episode series about the start of Queen Elizabeth II’s reign has the best cast and a movie-sized budget. It’s been one of my favorite things on Netflix for 2016. On Netflix streaming and DVD services, here’s what to watch like The Crown. 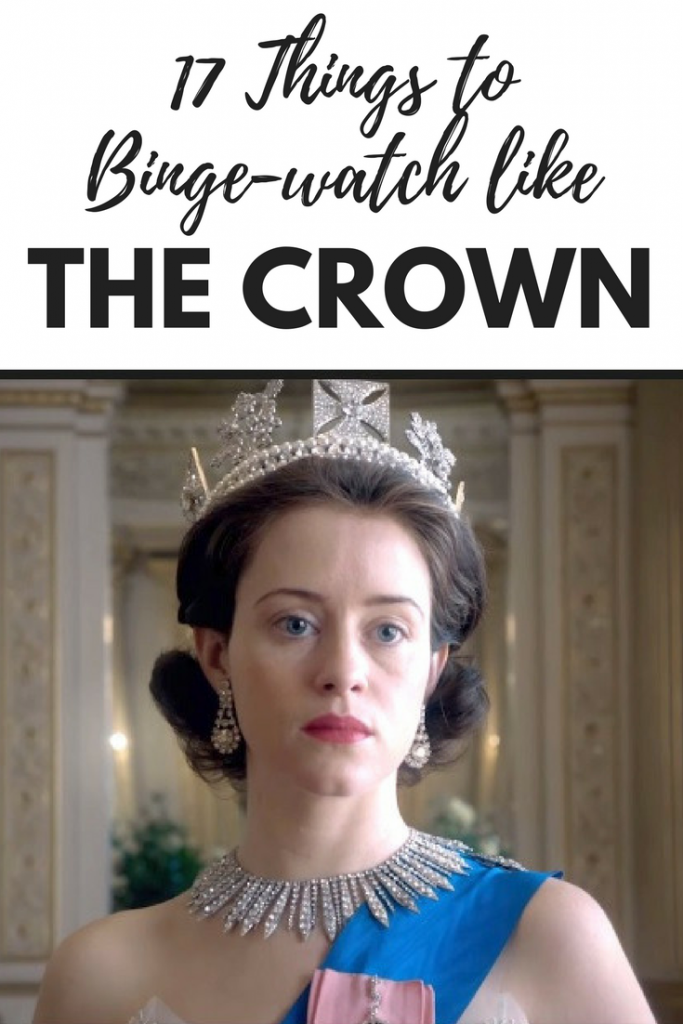 A Royal Night Out

A fictionalized account of Princesses Elizabeth and Margaret on VE Day. This romantic-comedy-drama follows the young royals as they mingle with commoners the night after World War Two ended in Europe.

Rupert Everett and Emily Watson play the King and Queen.

The documentary that will give you the real story, along with archival photos and film coverage, of The Crown. The first episode covers royal weddings from Victoria to William and Kate. See pictures of all the royal players in The Crown, including David and Wallis Simpson, and Elizabeth II herself.

The six episodes of The Royals covers royal scandals, pets, among other topics.

If you love The Crown on Netflix, then Call the Midwife is the perfect show for you. It’s the most like The Crown in era and mood. In post-war England, student nurses serve expectant mothers in the inner city.

Netflix has five seasons of Call the Midwife currently. This excellent period drama is based on the memoir of nurse Jennifer Worth. Nurse Worth began her career with an Anglican community of nuns who served as a religious order.

Call the Midwife covers the post-war baby boom, social changes, and also mentions events of the day that coincide with events in The Crown.

In The Crown, we see Winston Churchill when he’s elderly and infirm. While he’s still highly respected, all of his triumphs are in the past. Now his main concerns are disguising his poor health and preserving his legacy.

In Churchill’s First World War, the BBC presents a documentary showing Winston Churchill in his prime, but before his peak. The case is made that his experiences during the first World War prepared him for his time as Prime Minister during the Second World War.

The story of a younger Churchill is told through archival film footage, pictures, and dramatic re-enactment. It’s nice to learn more about the relationship between Churchill and his wife, Clementine. Read more about Clementine Churchill.

Jewel in the Crown

I remember this being a big deal on Masterpiece Theatre when it was first broadcast in the US. Binge-watch fourteen glorious Jewel in the Crown episodes, a romantic drama set in India during the last days of the British Empire.

You might recognize lead actress Geraldine James as Mrs. Hudson from the Sherlock Holmes movies, and lead actor Charles Dance was Tywin Lannister on Game of Thrones.

I searched Netflix for movies and shows about:

I was disappointed in the streaming section. There’s a greater selection in the Netflix DVD service. I think they are trying to encourage people to subscribe for DVDs again. In case you have that service, here’s a selection of shows that are a good follow-up to The Crown.

The King’s Speech (dvd only)

“This glossy ensemble drama juxtaposes the lives of famous divorcée Wallis Simpson and Wally Winthrop, a young 1990s housewife. Wally yearns to have a romance as dramatic as Wallis’s but soon discovers that history can be misleading.”

Edward and Mrs. Simpson (dvd only)

“This engrossing miniseries mines the drama behind one of the 20th century’s biggest events: the 1936 abdication of the throne by King Edward VIII (Edward Fox) to marry the woman he loves, American divorcée Wallis Simpson (Cynthia Harris).”

Bertie and Elizabeth (dvd only)

“In 1920, Elizabeth Bowes-Lytton accepted a dance from the Duke of York (aka “Bertie”). Soon, they fell in love, married and had children. But when Bertie’s brother, Edward VIII, abdicated, Bertie improbably ascended to the throne of England — something he’d never planned on doing — as George VI. This is the story of the couple’s life together as king and queen of England, ruling thoughtfully through eras of peace and world war.”

Queen and Country (dvd only)

The Long Day Closes (dvd only)

“Lonely 11-year-old Bud finds solace in the world of cinema in director Terence Davies’ sensitive autobiographical drama set in 1950s Liverpool. In the darkened theater, Bud finds a new, exotic universe far from the dismal landscape of his childhood.”

“Vera Drake spends her days doting on her working-class family in 1950s England. But Vera also has a secret side: She visits women and helps them induce miscarriages. When the authorities get wind of her activities, Vera’s world quickly falls apart.”

“Raised by his aunt since he was a young boy, charismatic teen John Lennon is reunited with his mother, which ignites a bitter battle between the two sisters for John’s affections. Along the way, John befriends fellow Liverpool lad Paul McCartney.”

Let Him Have It (dvd only)

“When a mentally challenged young man befriends a local thug who lives his life as if it were a gangster film, both their destinies are forever changed. This emotionally charged social commentary set in 1950s England is based on actual events.”

Remains of the Day (dvd only)

“Dutiful butler Stevens (Anthony Hopkins) dedicates himself wholly to tending Lord Darlington’s (James Fox) house, turning a blind eye to Darlington’s Nazi sympathies. When housekeeper Miss Kenton (Emma Thompson) tries to coax Stevens out of his staid shell, his reluctance may cost him dearly. He finally seeks out Miss Kenton later in life, but is it too late? This Merchant-Ivory period drama was nominated for eight Oscars, including Best Picture.”

“This awe-inspiring biopic about Mahatma Gandhi — the diminutive lawyer who stood up against British rule in India and became an international symbol of nonviolence and understanding — brilliantly underscores the difference one person can make.”

Check out our other suggestions on this post about what to watch if you like Downton Abbey.

How To Make This Your Best Year Ever

Best Year Ever? Jacqui can be found at Small Dogs Bark Loudest, where she shares stories on how she's still...