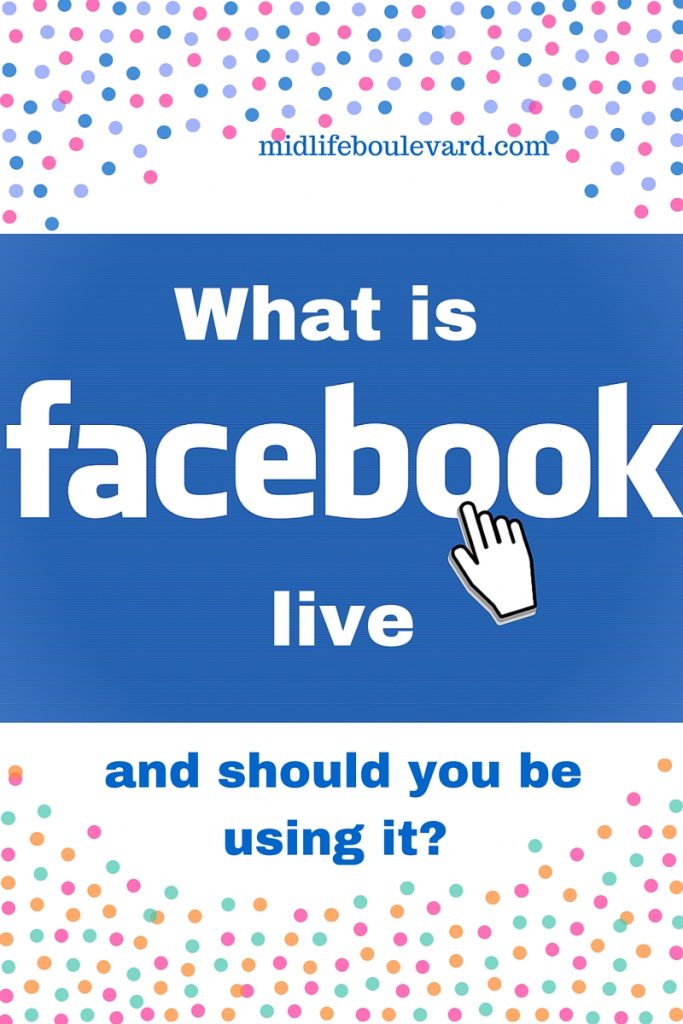 The other day, while I scrolling through Facebook during a short work-breather, I happened upon a post from my friend Nancy, who had just gone “live” as she and her seven-year-old took an alligator-spotting trip in the Everglades.

“Mommy, are you doing that video thing again,” I heard Gus whine in the background.

“We are in the Everglades and right now we can see a huge alligator,” Nancy said while fixing her phone on a large lump moving under the water.

“Since it is mating season, we may soon see another,” Nancy continued to her audience. At this point I could see that six other people were watching her live-stream.

“The alligator in front of us is at least six feet long,” Nancy said.

“The alligator is about 4 feet, one inch,” Gus insisted.

By this point I was practically doing a ROTFL, and my respite from work had been fun. But while watching, I was reminded that many people are still new to Facebook Live and don’t know what exactly to do with it. So here’s some lessons I’ve learned about this cool new tool that is predicted to be a social media game-changer. (Where have we heard that before? wink, wink)

What is Facebook Live anyway? That’s the question I’m hearing from friends and relatives who can’t figure out why suddenly all these videos that say “so-and-so was live” are appearing on their news-feeds. Basically, Facebook Live is tool that lets you use the camera on your phone while you’re in the Facebook app to shoot a video and share it as it is happening. Essentially, LIVE. It can be seen by anyone who comes across it while you’re recording. You can also watch the videos at a later date, as they are embedded like a regular Facebook post. You can also delete the video the way you can any post you make, thank goodness.

Why is Facebook doing this to us? After Meerkat and Periscope launched their live-streaming apps in Spring 2015, people started spouting the wisdom that video is the future of social media. When Twitter bought Periscope, people and businesses really began to take notice. It’s not you and me — real, live Midlife Boulevard reader and real, live Linda Bernstein — that Facebook cares about. It’s the brands and the marketers who can use live-streaming to promote their products they’ve got their eye on. It’s these same brands and marketers who are jumping up and down. The trouble with Meerkat, and even Periscope, is that you need to go to a new and separate app to use the live-stream camera. With Meerkat that means getting used to a new platform, finding people to follow, getting people to follow you and so forth. Periscope has the benefit of its tie to Twitter, but you can’t live-stream from Twitter. With Facebook Live, you just have to be on the Facebook app, which is where a lot of people spend a lot of their time anyway, over 1-1/2 billion of us worldwide. Facebook Live is not merely a kick in the gut to its live-streaming competitors; it’s also a subtle attack on Google-owned YouTube. At some future point, and especially once editing tools become available, people might be so reliant on Facebook Live that they won’t bother with YouTube.

So I’m a person. How should I be using Facebook Live? This is social media, people. If you don’t want to go there, you don’t have to go there. But if you’re trying to find an audience, then it’s a good idea to decide what your niche will be and go live at a specific time every day or week so people will know when to catch you. If people subscribe to your live-stream, they will get a notification whenever you are using the feature. So far I’ve been sporadic about it. I’ve been using the tool more as a video recorder than for the live-stream aspect, capturing cool things that are going on around me. On some of my Live sessions, I’ve garnered 1K views. Others I’ve put the privacy setting on “only me” because I don’t want to share the video.

What do I need to know to start using Live? Facebook has ended the landscape vs. portrait debate for live video by making theirs square. Good move, Facebook. You will find the Live button in your Facebook status box on your phone – although Live is supposedly soon coming to tablets and computers. It looks like a person with a WiFi signal around him. You can switch from your front to back camera — but since there are also two microphones on most 2-camera phones, you may want to change the audio, as well. You can zoom and adjust the white balance while you film. You can also name your video, and you can see comments people make while you’re live. These comments don’t seem to show when you stop filming, though people can then just do regular comments as they would for any Facebook post. As of now, some people have the ability to live-stream for an hour, others for just 30 minutes. I have no idea why. Once you’re done, you can save the video to your camera roll or embed it someplace else on the internet.

Live videos while they are being recorded are now ranked higher in the Facebook algorithm than other videos, and once you’re no longer recording, the saved “Live” video will be ranked just like any other video. This means that once your friends start using Live, a lot of live-streaming is going to show up in your feed. Will that be annoying? Perhaps. If people complain will Facebook change its algorithm? Perhaps. The social network has been known to roll back updates that didn’t prove popular. But until then — and maybe forever — smile, because you may be on camera.

Senior boy here tapping into the wisdom of the girls. I have Parkinson's disease which slows my generalization to detail ability. I even wear a GPS on me especially in new and unknown territory. As my journeys are short, I usually am walking or biking. I once saw the world through the eyes of a genius. I now see the world through the eyes of twisted neurological pathways. Sometimes bad, but mostly good. Flowers for Algernon on a parallel street. I want to capture what I see. Can someone give me step by step details on how to use Facebook Live in order to capture the regression via creative utilities.

If you were in Las Vegas a few weekends ago you're going to recognize many of the names I'm sharing...