Skip to Content
0 shares
The man I love has put on a little weight.
I shouldn’t be shocked. Keeping the pounds off is one of the challenges of middle age. It’s a challenge that many of us don’t meet.  Next time you’re hanging with a crowd of your peers, look around.  Plump is the new normal. 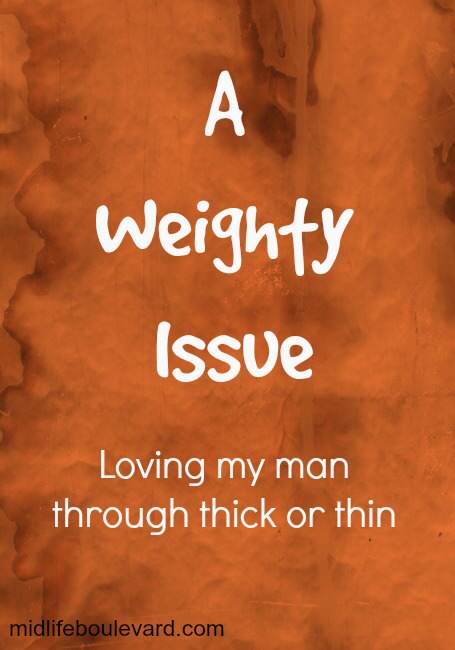 When we met, 20 years ago, Mark was just my type. Tall, lean and muscular. Like Batman, without the bulk. (Or the crazy vigilante attitude.)  But recently, he’s begun to look less like Batman and more like Buddha.
Mark, of course, isn’t a crime-fighting superhero. When we were introduced, he owned a small used bookstore. But he always looked like,  if necessary, he could shed his glasses and spring into action.
So what happens when you fall for sexy young Marlon Brando and, years later, find yourself living with mammoth middle-aged Marlon Brando? Or you wed young Elvis, but it looks as if you’ll be celebrating your 30th wedding anniversary with Fat Elvis?
Weight happens. But, if you really love your partner, don’t you owe it to them to stay in shape?
Perhaps. But be reasonable. Maybe your wife was slim and lithe when you married. But after a couple of decades and a couple of kids, should you really expect a Jennifer Aniston look-a-like when the clothes come off?
I have a pal whose wife has put on weight since they tied the knot two  decades ago. Occasionally, lean, health-conscious Jerry fusses at Greta to drop the pounds (ostensibly for health reasons) even though she’s amassed a weight (HA!) of scientific evidence to the effect that incremental middle-aged weight gain may actually be, health-wise, slightly protective.
“Greta asked what I wanted for our anniversary,“ he confided recently, “So I asked if she’d consider dropping a dress size.”
“How did that work out for you?”
A grimace. “She didn’t speak to me for 3 days.”
I’m with Greta.  She’s happy and healthy. Jerry just has to adjust. But when it comes to my own relationship?  Suddenly I’m not so reasonable.
For years, Mark and I both stayed lean and fit. Then, three years ago,  for family reasons, he moved to West Virginia. While I’ve adapted to the long distance relationship, I now think of West Virginia as “The Weight Gain State” because, soon after becoming a resident, my man became stout.
A better woman would respond with,  “Not a problem! Now there’s more of you to love!”
Unfortunately, I’m not that wonderful.  And though there are plenty of women who really go for pot-bellied guys,  I’ve never been one of them.
When my beloved first turned up with a tummy, I gently expressed my feelings.  “I know that I’m being superficial,” I said, “but dudes who look like Santa in the sack are a great big turn-off for me.”
“I’ll lose the weight,“ he promised. He confessed that he didn‘t feel so good about being portly himself.
“Thanks, honey,” I said, relieved.
He dropped a few pounds. Then… nothing. That tummy, it seems,  is here to stay.
I still suggest that he lose weight from time to time, and he assures me that he’s trying. When it comes to dieting,  though, I ascribe to the Yoda School of Weight Loss: “Do or do not. There is no try.”
Have I adjusted to this new reality in a mature, responsible way,  relying on the wisdom I’ve accumulated over nearly six decades of life, resolving that my sweetie is such a wonderful guy that I can overlook a few extra pounds?
I wish. Instead, I’ve learned that it’s far too easy for this particular 59-year-old to get in touch with her inner kindergartener. Those playground taunts are still there, decades later. I don’t yell “Fatso!” when my beloved enters the room. And I never would. But I can’t deny that a part of me — infantile, outraged, frustrated, and unhappy —  wants to.
So what are you supposed to do when your partner changes?
Turn and face the strange changes a la David Bowie? Kick him to the curb and slap a new profile up on Match.com? Shut your eyes and think of Brad Pitt?
Trolling for AARP-aged dudes with hot bodies on Craigslist, is, of course,  totally out of the question.
Relationship Guru Dan Savage has opined that we owe it to our partners to stay in shape. If you let yourself go, you’re signaling that you just don’t care. “I know what you want,“ you’re telling your beloved, “But you won’t get it from me.“
I’ve kept trim and fit. It’s only fair that he, too, keep trim and fit. Yeah, but what if he can’t?
Should I overlook the fact that a dude who once looked like a superhero now looks like Winnie the Pooh? Let our relationship revert to the intense but platonic friendship it was when it began?
Shut my eyes and think of Batman?
I’m well aware of the fact that my inability to tolerate a few extra pounds on an otherwise delightful guy says a lot more about my own shortcomings than about his. (And God knows I’m far from flawless myself.) And yet, as Emily Dickinson wrote and Woody Allen famously repeated,  “the heart knows what it wants.”
Of course, as anyone in an enduring relationship knows,  the heart doesn’t always get what it wants.
Sometimes the heart has to settle.
This essay first appeared on www.purpleclover.com

My man and I recently attended an event where he bumped into a few guys from high school he hasn't seen in 30ish years. One of them exclaimed, "Why aren't you fat and bald?!?! You're making the rest of us look bad!" I just smirked and thanked my lucky stars that we both enjoy the gym 4-6 days a week and biking 100+ miles a week (weather permitting). I can't imagine how I'd feel if he suddenly became the "normal middle aged man shape".

Oh I get this. My hubs is way overweight and every time I see hime put something in his mouth he shouldn't I want to scream. He lost 100 lbs 2 years ago, still overweight but better...and gained it back. It effects all parts of our life and although women gain weight with kids, that is because they were pregnant. I have maintained a good weight and never been overweight. If I start to get a little thicker I am the first to work on getting it off. Him, well not so much. It is definitely a wedge (of cheese at this point) in our relationship.

I'm up all night hot flashing and using the bathroom. Because I'm up so much, insomnia steps in. Stupid...