When Sherry Stanfa-Stanley turned fifty-two, she decided to break out of a rut and shake up her life. A new adventure every week? That’s what the 52/52 Project is all about. This story about being a wedding crasher is just a taste of what she’s up to. If you’re thirsty for more, check out tons of fun stuff on her blog.

Here’s a little hint about remaining inconspicuous when crashing a wedding reception: It’s probably best not to catch the bridal bouquet.

The bouquet toss was the furthest thing from my mind when I cruised party halls on a Friday night, searching for a crowded parking lot. I was simply anticipating another new adventure for The 52/52 Project: my year of frightening and exciting new experiences. I was seeking a nice meal, a few drinks, and the opportunity to celebrate the wedded bliss of a wonderful couple. Sure, I wasn’t invited and I’d never met either of them. Minor details.

I finally scored with a lot full of cars at the third hall. I ignored my trepidation, wandered in, and made a beeline to the bar. My beer was served in a real glass. No plastic cups for my fabulous, newly wedded BFFs. This was a classy kind of gig. I was pretty certain I’d fit right in, if I weren’t just some freeloading stranger walking in off the street.

Yet, I wasn’t a true freeloader, since I had brought a congratulatory card with a gift certificate enclosed. I dropped it ceremoniously on the gift table and swiveled my head around, hoping it might validate my presence there. 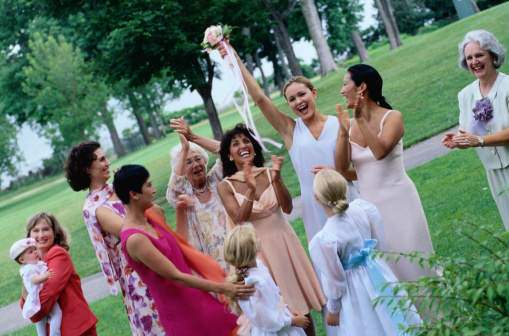 As I saw the line forming for the dessert table, I realized I missed dinner. If only I had actually been invited, I might have known what time the reception started. What if it had been a planned seating arrangement though? I’d have been S.O.L.

I blew out a sigh of relief. Still, I wasn’t too late for libations—and a chance to mingle with a hundred or so total strangers. I joined a group on the outdoor patio and found myself fitting in easily. No one questioned me or my relationship to the bride and groom. I was almost disappointed I didn’t have to conjure up the story I’d fabricated on the drive there. (My name: Shelly. My relationship: Girlfriend of Jim Miller. He used to work with the groom. Where: Hmm. I can’t remember. Wow, the bride’s gown is gorgeous, don’t you think?)

Mid-conversation around the fire pit with a cute, slightly younger guy, I saw the bride approaching, eager to join our discussion. I backed away, avoiding her glance, and headed back to the room.

As I watched people out on the dance floor, I deliberated asking someone to dance. A terrifying thought, which made it all the more an obligatory move. I hadn’t danced with a stranger in, what, a decade? As my stomach rolled, the DJ made the last-call for the bouquet toss. I realized this wasn’t only an easy-out but also a terrific photo op: a shot of the unidentifiable backs of a group of women, lunging for the bouquet. I hurried over, stationing myself several yards back. I pulled out my new iPhone as I the DJ began his countdown.

Before I could manage to find my phone’s camera setting, I looked up to see the crowd of eager, single women—as well as nearly every wedding guest in the room—staring at me. I followed their eyes and glanced down. Apparently the bride was a former softball pitcher witha hell of an arm. Her throw landed the bouquet far past its intended aim: two inches from my right foot. My eyes darted around the room, which had fallen uncomfortably silent. All faces were focused on me. I had no choice, really. I bent down, picked up the bouquet, and clutched it. I smiled stupidl

As cameras flashed, my heart rate quickened. What now? According to normal wedding reception protocol, I would soon find myself posing for more photos with some garter-snatching stranger feeling his way up my thigh. It was a halfway appealing notion, but I was pretty sure I’d rather salvage the bit of anonymity I had left. A little girl came to my rescue. She ran over, tugged at my blouse, and said, “Can I have it?” I smiled down at my small savior and said, “Honey, it’s all yours.” I thrust the bouquet in her hands and walked straight to the exit, pausing only to deposit my half-finished beer at the bar.

“I accidentally caught the bouquet,” I told the bartender. “Probably a good time to leave.”

As I headed to the parking lot, I envisioned the bride and groom the next day, watching their wedding video. When they got to the bouquet toss, they would look at each other in squinted confusion.

“Who is that woman? Wait, you mean you don’t know her either?”

Besides my mysterious image captured in digital images forever, all I left behind was my gift and my wedding card. I’d chosen the card very thoughtfully. The pre-printed text read: “A toast to good friends: To a great couple, to your love, your future, and your happiness… and to the friendship that will keep us close always.”

I signed it: “Thanks for an evening none of us will ever forget.”

Wasn’t that the truth. Although I didn’t remain inconspicuous, I figured I did stay anonymous, at least until a discovery the next day when I posted my story and a photo online.

Here’s another little hint about wedding-crashing. It’s best not to be Facebook friends with the owner of the reception hall.

Sherry Stanfa-Stanley is a humor and human-interest writer whose stories have appeared in The Rumpus and in the anthology Fifty Shades of Funny. Last year, she challenged herself with 52 new life experiences far outside her comfort zone. They ranged from going on a raid with the vice squad and SWAT team, to babysitting quadruplets, to crashing a wedding reception where she accidentally caught the bouquet. Through The 52/52 Project, she pushed her boundaries, gained courage, and learned to laugh at herself in the most awkward of situations. The 52/52 Project is proof it's never too late to reinvent yourself.

So that was you? Just kidding. You brought a gift! Greatest yet of the 52.

This was awesome. I'm 52 and this really hit home. Love your idea

SHERRY, YOU'RE CRAZY!I HERES TO HOPING IT RUBS OFF ON ME - LIVING IN YOUR OLD HOUSE LOVED YOUR STORY!