I’m a librarian. A reader. I identify as a four-eyed person. I’ve always worn glasses. I got my first pair in the second grade. It was a miracle! The blurry world I’d inhabited all my life suddenly came into focus. I could see the blackboard! I could read street signs! I could actually see facial expressions.

It was the early ’60s, decades before Nerd Pride, when myopia wasn’t cool. The ideal girl was a cheerleader, not a bookworm. There’s a reason why that pop song was called “Brown-Eyed Girl” and not “Four-Eyed Girl.”

My new specs, with their light-blue frames and thick lenses, didn’t signal: “Cool! Smart! Fun!” They signaled: “Hey bullies — pick on THIS kid!” 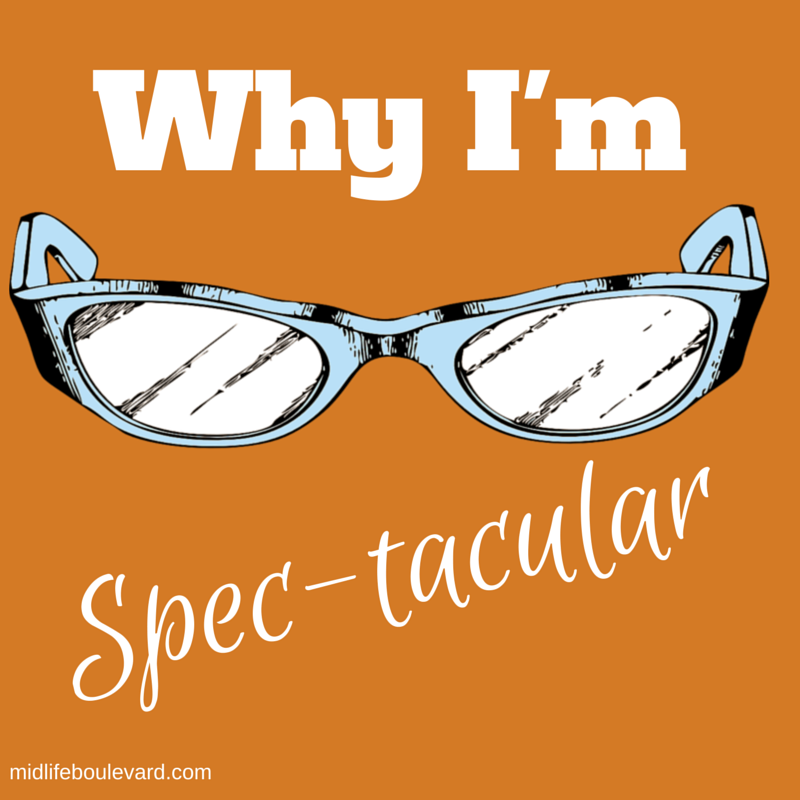 True, I always had my nose in a book, but with my blue eyes and long blonde hair, I’d gotten away with being a book nerd who could pass for a little Disney Princess. Now, however, I was busted.

I was comfortable in my soft, muzzy world and my new glasses were ugly, so I only wore them when I absolutely had to. As I got older, my vision grew increasingly worse. But — lucky for me — glasses got cooler. By the time I hit 7th grade, cheerleaders were on their way out and hippie chicks with granny glasses were on their way in. Even John Lennon, my hero, wore specs!

At the mall one Saturday, my friends and I went into an optician’s office and began trying on frames for a lark, and I fell in love with a pair of groovy round-framed tortoiseshell glasses. “If you buy them for me,” I promised my mom when I got home, “I’ll wear them.” She came through. And ever since, I’ve been a proud member of the four-eyed club.

These days, my specs signal: “Cool! Smart! Appropriate for library work!” And it’s a good thing that I’ve come to love wearing glasses because I couldn’t survive without them. My eyesight, steadily deteriorating for five decades, is now so abysmal that without my glasses I’d walk into walls, tumble down stairs, or at the very least knock everything off the bathroom counter each morning.

Sans specs, I’m a total klutz in a world that’s a blur. Reaching for them is the first thing I do each morning and tucking them away in a safe place is the last thing I do before I go to sleep each night. I even wear them when I swim. My glasses are so much a part of me that once, when my son was a baby and I removed them for a second, he gave me a look of pure horror, then burst into tears. To him, it was as if I’d suddenly taken off part of my face.

But now, as I approach 60, the world is becoming blurry again. I’ve begun having trouble reading signs and seeing facial expressions. I can no longer see the look in your eyes unless we’re nose-to-nose. Why? Cataracts!

It took me a while to notice, and then to figure out why this change didn‘t alarm me. Instead, it felt oddly familiar. Even pleasant. Then I realized that it’s rather nice to find myself back in the soft-focused world I lived in at age 7. But I can’t stay here. I’ve grown accustomed to being able to see.

On the horizon? Cataract surgery! Am I looking forward to it? Hell no. Not just because I’m not eager to have my eyes go under the knife. (Ouch!) I’m going to miss the four-eyed me. My doc assures me that after surgery, I’ll be able to toss my specs. “You’ll be able to see just fine without them!” See without glasses? Me? Are librarians even allowed to do that??

I’ve never been the kind of person who eagerly embraces change. But at 59, I’ve learned that — ready or not — change will come for you.

Will I be able to throw out my glasses, shed my lifelong identity as a four-eyed girl and live non-myopically ever after? Um … I guess I’ll just have to see.