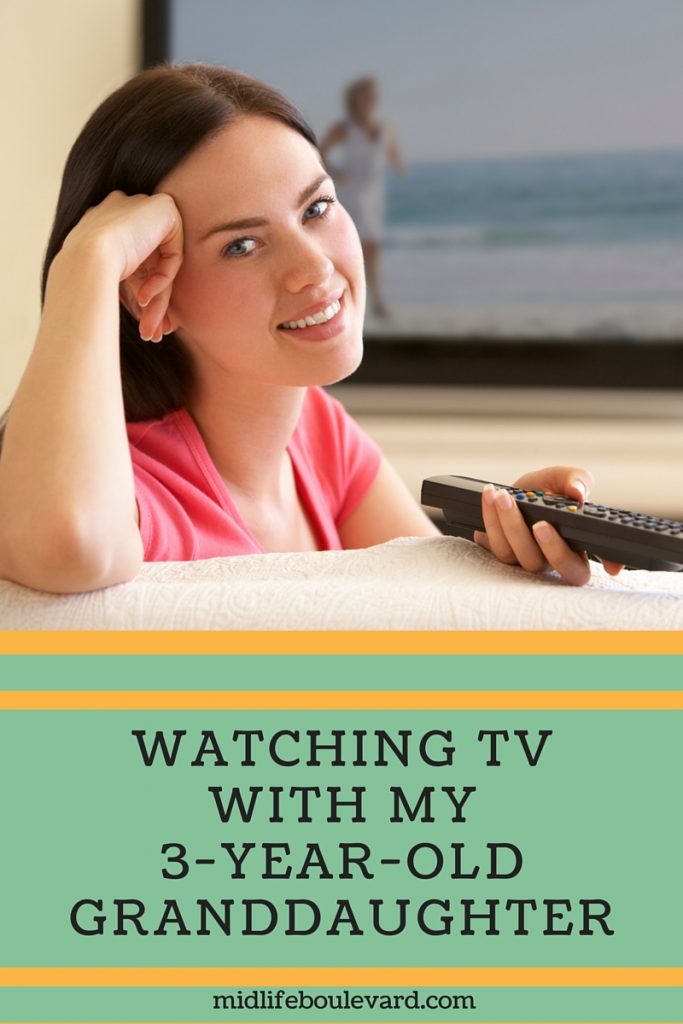 In the interest of the “60 is the new 40” generation, I am writing to request you consider our mental health with some of your commercials. TV shows of naked people, ads discussing erectile dysfunction and hemorrhoid cream need to be shown after little kids go to sleep. Not all of us are equipped to withstand the intensity of the questions that arise.

I sat with my 3-year-old granddaughter last week as she flipped through the channels on TV. “What does naked mean?” she asked me as she chomped on a cheese doodle. The ad for Naked and Afraid was on the screen. “Why are they afraid?” For the love! I’d barely sipped my morning coffee and now I have to answer questions like this.

“Naked means you don’t have clothes on,” I explained calmly.

“Why would they be scared?” she asked. It was a legitimate question.

“Because they are out in the woods with no clothes on and they have no food.”

“There’s a man and a woman together,” I explained, as if that made things better.

“Where’s their mom and dad?” she asked, with great concern.

“They’re at home.” I started to wonder myself. Honestly, if my daughter was on that show, I’d take out a search party and drag her butt home!

“Parents don’t like to see their big kids naked and scared.”

“Ohhhhhh,” she said. Because that makes perfect sense.

Next a commercial for erectile dysfunction popped up (no pun intended).

“Oh look how happy they are!” I said, as the couple stared into each other’s eyes and took laundry off the clothes line. Next scene they were dancing in the kitchen. Flash to the next screen and they have moved to the meadow in two separate bathtubs.

“Why do they have two bathtubs in the field, Gigi?” she wrinkled her  forehead.

“Some people like to take baths in a field,” I lied.

“They can get wrinkled if they stay in too long,” she warned. She tilted her head and flashed her blue eyes innocently.

I almost told her he didn’t have to worry about wrinkles because he took that pretty blue pill, but I just sipped my coffee and broke into a sweat. I was getting anxious about the next topic I’d have to discuss. Not to worry, it was a dance show. I took a deep breath of relief. Who knew a 3-year-old had so many questions? The music began and the dancers began a hot salsa dance.

She hopped off the couch and began to jump and gyrate. Her bones must not be solid yet because she moved like Gumby was lodged in her hips.

She twirled and sang and giggled. Her hips were going wild, knees in motion, shoulders rocking, up and down she went.

“If we take our clothes off, we can be naked, but we won’t be afraid in my living room,” she said between her slinky gyrations. She pulled her shirt over her head. I stopped mid-hip swirl and suggested we keep our clothes on. “Don’t be naked and afraid!” she yelled as she pulled her bottoms off. I was out of breath now and sat down when the next commercial came on.

Seriously, did it have to be hemorrhoid cream!? I watched her expression change as she tried to figure it out. “Gigi, I don’t like that cream. What is a hem-o- roid?”

She repeated the question as I slowly sipped my coffee trying to think of an answer. “Well sometimes your butt gets sore and you need that cream.” I told her truthfully. “But WHAT is a hem-o- roid?” she persisted.

“It’s a little bubble on your butt.”

I answered hoping to end this conversation. She looked horrified!

“A bubble on my butt?!?! Maybe that’s why those people were naked and afraid and had to sit in the bathtub in the woods, Gigi. They had a bubble on their butts.”

“That makes perfect sense!” I told her, relieved. I turned off the TV and we went to the park before Gigi had a breakdown!

Advertisers, we were much sharper in our younger years. I felt like a deer in the headlights when she asked these questions. If I had time to prepare, I’d have intelligent answers, but 3-year-olds don’t allow that.

I am leaving this matter in your capable and creative hands. I hope you’ll consider this carefully. You can reach me at our local mental ward if it takes you longer than a week. I will be the one naked and afraid, hiding in a bathtub with a tube of hem-o- roid cream. You can’t miss me!

You and I have had the same type of days. Except I have been hit with questions from my 8 ýear old grandkid well smh lol

Bless her little heart! I love the things children say and how they interpret the world at 3. This made me laugh so much!

You always make me laugh, Anne. Thanks!

Reminds me of the conversations I used to have with my kids back when they thought I was the fountain of knowledge rather than just some daft old lass who they call mum!

The Flood Girls by Richard Fifield