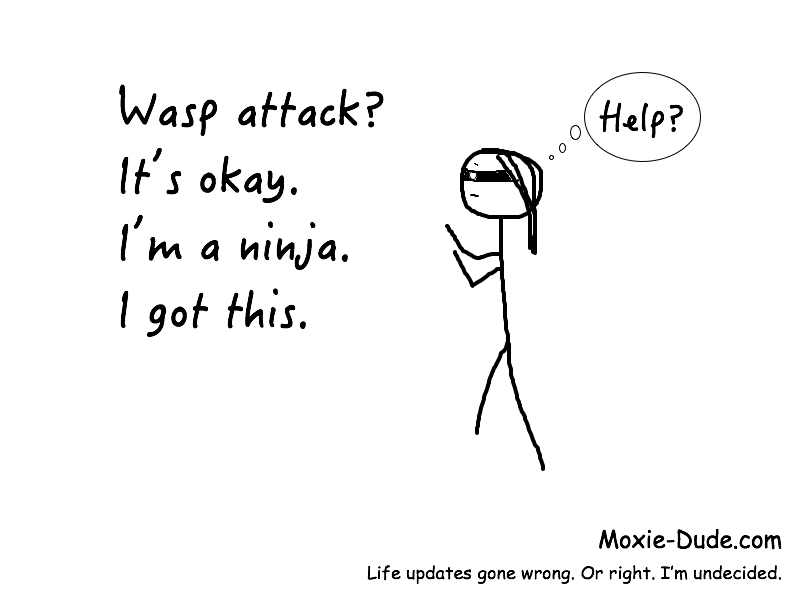 Bear with me as I figure out the best way to spin what happened recently.

But first, I need to interrupt this post for an unscheduled thought.

Bear with me -vs- Bare with me. I’m asking you for forbearance so it’s “bear with me.” I looked it up. You’re welcome.

Back to our question of the day: how should I spin this post?

If my mind steps into writing mode #1 I’ll tell you how social media tried to kill me. Except that I love social media. Also, blaming others for our own dysfunctions is against my religion. So …

Writing mode #2 would have me tell you about how I almost died because I MAY be allergic to wasp stings. But that sounds overly dramatic.

And then there’s writing mode #3 where I just tell you what happened and let you decide.

Let’s go with writing mode #3, shall we?

So here we were (and by “we” I mean “me” because I was alone … or that’s how this story starts, anyway) and after a few hours of morning writing it was time to head off to the gym. So far so good. Routine shmoutine, it was a beautiful day, yadda yadda yadda.

I was getting in my car, the sun shining and warm on my skin, and suddenly the view hijacked my attention and I was compelled to take this picture. 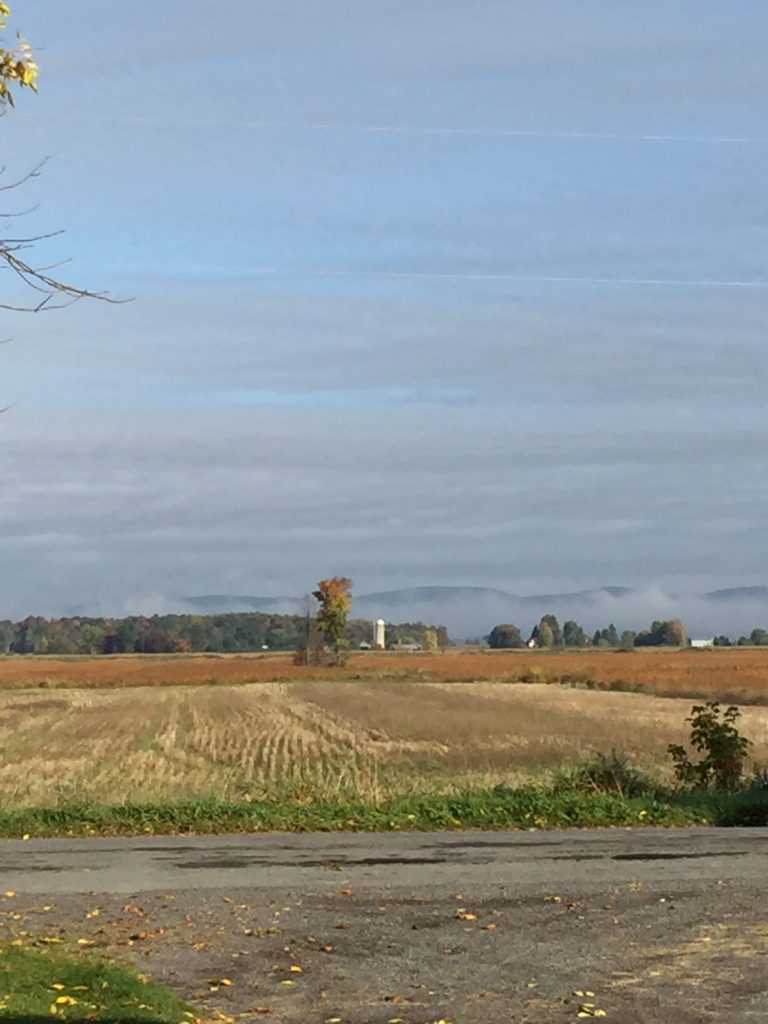 Admiring my skills as a fake photographer, I was suddenly accosted by a thought: “I’d be selfish if I kept this view to myself. I have to share this with the world!”

So I sat in my car and fiddled with my phone so that I could post this picture on Instagram.

The breeze was light.

And then a wasp flew in my car.

This is where the serene stillness of the morning gives way to confusion. Either Instagram tried to kill me or I almost died from a wasp sting. Either way I lived to tell the tale. (Oops. I think I just spoiled the ending for you.)

As you can imagine, my gut was seized by a panic attack the size of Godzilla. Less-than-gently, I lost control of both my mind and my reflexes as my cell phone jumped out of my hands at the exact same moment that the rest of me jumped out of my car. Also a few cuss words may have jumped out of my mouth. Yes, there was a lot of jumping going on.

So panic, jumping, and cussing. Also dilemma. There was NO WAY that I was going to drive with THAT THING in my car. (Now you see where the “we” comes in, right?)

The next 30 min … 40 …minu … A VERY LONG TIME was spent trying to coax that damn wasp out of my car. I didn’t want to kill it. And even more detrimental to my sense of safety, I didn’t want to piss it off. So I opened all the car doors thinking … well, hoping … that maybe it would convince itself that it should head back where it belonged: on the OUTSIDE of my car.

Between you and me there was really no way that I was going to drive anywhere with a wasp as a passenger. Uh uh. No way.

But for some stubborn reason it kept trying to get out through the rear window. 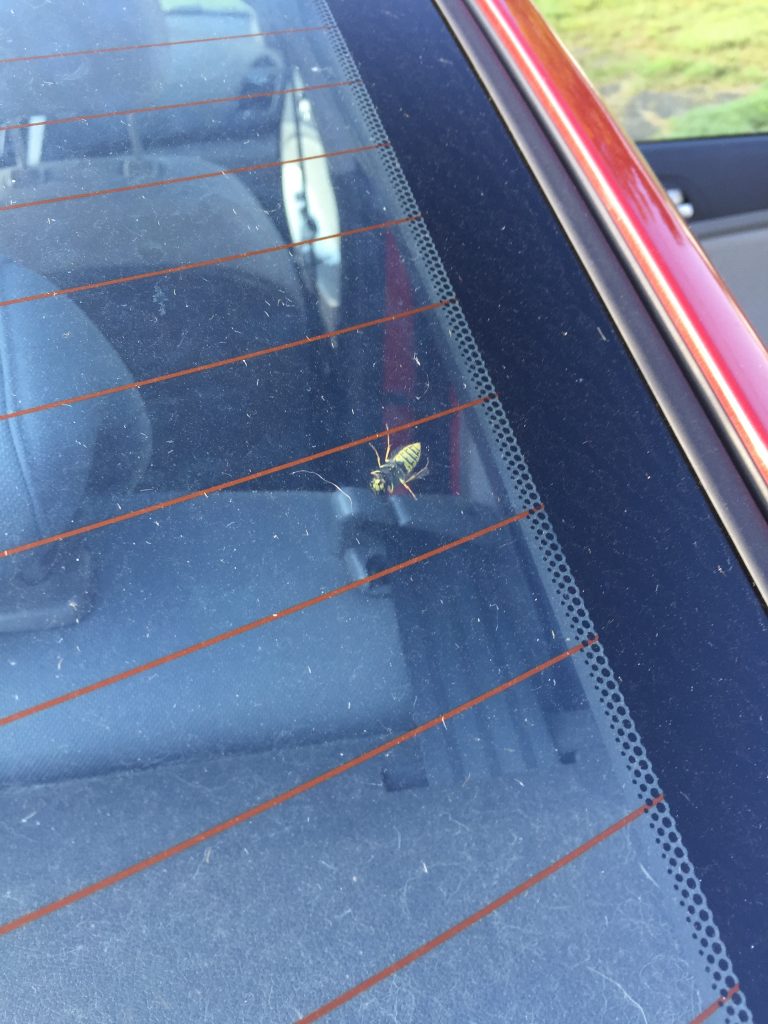 The wasp was so pissed off that it’s mad buzzing sounded like a roar. It was the lion. I was the gazelle.

And while I usually chastise my car for its messy, neglectful state, this was one time that I was actually thankful for all the crap in the back seat. As it turns out, you never know when you’ll need a piece of junk mail. I grabbed a flyer that’s been sitting in my car for about two years and used it as a wasp charmer to try to lure it towards one of the open doors.

The wasp would have none of it.

“Leave me alone, you stupid human! There’s a way out back here, I just know it. So stop distracting me and go … I don’t know. Go drive somewhere or something.”

“Gee thanks, wasp. THAT’S WHAT I’M TRYING TO DO. And if you would be so kind as to get out of my car, maybe I COULD drive somewhere.”

This went on for over a lifetime. A little coaxing. A little yelling. Lots of swearing. My dogs howling from inside the house because they could hear all this going on and were like, “Why are we in here and you’re out there? You told us you were going to the gym.”

Then all of a sudden the end of the world came to an end. “Bzzzzz. Ha! Found the way out. Later, loser.” And the damn thing buzzed by and almost flew into my cheek. (I’m convinced now that the wasp was drinking.)

I came THIS CLOSE to not screaming out loud.

Now I had a decision to make.

Suddenly I was the wasp, determined to solve a problem. Part of me was looking for a solution through a window that didn’t open. Was my self-imposed sense of guilt a false sense of escape? Maybe I didn’t feel like going to the gym anymore. Maybe I just wanted to go back into the house and return to writing.

What will change in my life if I go to the gym? Nothing.

What will change in my life if I don’t go to the gym? Nothing.

(Note that all this thinking was going on from inside my car, with the doors safely closed.)

And then I was hit with an idea for a story about a serial killer and realized that I HAD to go to the gym. Otherwise I would get no “real” work done for the day because I’d be stuck in serial killer mode. I needed a distraction.

You see how things work when you’re a writer?

Finally I went to the gym and came home mentally geared up and ready for work just like my daily routine tells me to do.

PS. I am working on that serial killer story though. Here are the first two lines:

The smallest coffins are the bravest. Like dead soldiers, they carry so much yet are empty inside.

PPS. I guess I never expect to sleep again.

Crazy Cat Lady: Could That Be Me?

It is a truth universally acknowledged that a woman in possession of a good number of cats must be in...