I hate to say it, but men have got it all wrong, for the most part. And, the media—the movie industry, the ‘typical’ romantic books—they make us feel inadequate when we can’t have the kind of sex they’re feeding us. 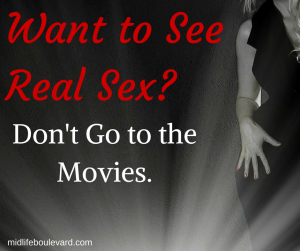 I just started watching the British series, White Queen, based on a book by Philippa Gregory. It’s set in 1460s England—a lovely historical fiction with intrigue and sex. The first couple of episodes focus on the sexual attraction between the King, Edward IV, and his soon-to-be bride Elizabeth Woodville. The initial seduction scene is tender and full of sexy anticipation. And, then it isn’t. It just doesn’t work for me. They undress, they tumble on the bed, they kiss. Then he enters her, intercourse ensues and that’s all there is. The viewer sees her body arch with pleasure and they’re clearly having mutual orgasms. They are tender and sweet with each other but the sex is decidedly male focused.

Several years ago I would have been caught up in the sexiness of these scenes, but no longer. The love scenes are written from a male point of view, because we all know that the vast majority of women aren’t going to have an orgasm without any foreplay whatsoever. Men want to see themselves penetrating a woman; they want to see the woman in full enjoyment, and satisfied, by intercourse. It’s reassuring. For the man.

Women need more out of a sexual encounter. Women take longer to warm up and feel arousal—and we need touch. We need attending to.

Most sex scenes are written by men, for men. The hazy lighting, the lovely sheets on the bed—all the frills, those are for us. But the sex is exactly what men are eager for—penetration. The sex scene in The White Queen is not unlike porn sex scenes where the focus is on his pleasure. I wasn’t expecting a 1460s woman, even a widow with two kids, to speak up about her sexual needs.  After all this is a ‘period’ movie—but I realized that this kind of sexy encounter holds less appeal to me as I’ve become more in tune with what real sex looks like.

To have the kind of sex that satisfies us as women, we have to be able to speak up about what we want. Not all male partners come to our beds with the knowledge necessary to fully understand a woman, much less the nuances unique to you or me. Our sex education is not pleasure-focused. Where is a man to learn about a woman’s clitoris, or how to touch delicately here or there? They don’t. It’s our job to tell or show them. This is not an indictment of men. Women don’t learn those things either—we have to practice, explore, indulge in a little trial-and-error. We have to read and take time self-pleasuring ourselves in order to understand what turns us on. Very few women have the opportunity to have sex with an experienced man who knows all of these things.

My experience, both personal and educational, tells me that the vast majority of men love penetration. They were raised to see intercourse as the norm and the pleasure of ejaculation ranks pretty highly. But, I also believe that men want to provide their partners with pleasure. Many men are willing to explore and experiment—knowing that giving pleasure is as important as receiving. The two are inexplicably connected and the best sex occurs when both parties are in tune to each other.

There is a learning curve to sex. And, maybe as we age and our bodies change that learning curve happens all over again. We must keep trying and playing—experimenting and communicating—if we want a satisfying sex life. Our job as women is to speak up for our own needs, to help the man in our life (if that’s our orientation) figure out our body and what makes it sing with pleasure. It’s the responsibility of both partners to craft a mutually enjoyable sexual situation.

Unless it's a documentary, every movie is someone's idea of what happens, none of it is reality. But it's easy to internalize these messages without even knowing we have. Good counsel today, Walker!

I half agree with you Carol--when it comes to the way scenes are written and shot it's often more about the director's vision and gender sometimes gets in the way. There is a growing trend in erotica towards female written/directed films which portray women and the sex in a very different light. Thanks for the 'good counsel'... and thanks for your support.

I realize that this is your area of expertise, and I agree with you for the most part. But there is one thing that I might disagree with. That is that I think we women sometimes underestimate how much foreplay and "snuggle time" men really do want. I think it may be a kind of self fulfilling prophesy. Women don't expect too much foreplay etc., men feel that and so they dispense with it. Often, despite our wants, needs, and arousal, we have given in to preconceptions and low expectations. That, and we are all too tired to expect much. That's the kind of society we seem to live in. We work hard and we think we "play" hard, but do we play well?

Anita, I agree. And, I appreciate you adding that point of view. The article was primarily focused on what women want...but we can't fully enjoy sex if we're not also tuned in to the needs and wants of our partners, male or female.

I've started tuning in more to the needs of my male readers and in real life conversations-I think men do want to be able to have that same level of affection and play. And, I think we're willing to go there, sometimes it takes a nudge or the idea that something more might be possible.