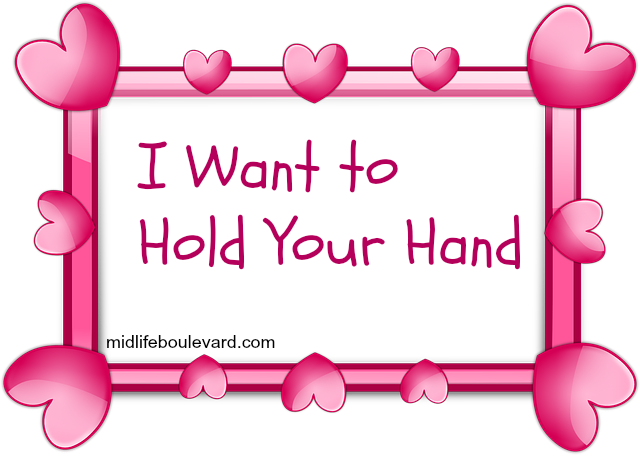 He lived up the block from me. We sat near each other in most of our classes that first year of junior high. My last name started with an E and his started with an F. The alphabet brought us together initially, but then we found ourselves under the influence of inner urges neither of us understood at the time. All the kids knew we liked each other in the way that young teenagers pick up on the smallest vibe and make it into a full-blown thing. We were watched by all our friends: the girls cataloged every look, every smile, for nuance and reported back to me; the boys just acted stupid, as always. Tensions rose among our circle of friends. When would he make a move? Inquiring minds wanted to know.

One day in our World History class, right under the nose of Mrs. Stott who had proven that she had eyes in the back of her head, he made his grab for my hand under cover of darkness. It was movie day, and we had discreetly scooted our chairs together the tiniest bit as the lights went out. Word spread in whispers around the class. We were supposed to be watching a movie about Mesopotamia. To this day, there is a huge gap in my knowledge about the cradle of civilization.

Over the tinny sound track, the disembodied voice of the movie’s narrator droned on about the Fertile Crescent. But my fingers were entwined with a boy’s and all my attention shot to the nerve endings in my fingertips. Electricity arced between our sweaty palms while images flickered on the projection screen in front of the classroom. My heart fluttered as I slid my foot closer to his.

The movie dragged to its conclusion and the teacher flipped the lights back on. She immediately honed in on the two of us as we pulled apart—not quite quickly enough to escape her eagle eye. Just before the bell rang, she said something pointed about inappropriate displays of affection in public and we both slunk out of the room, red-faced and dizzy with excitement.

Shortly after this daring caper, he asked me to go steady. My parents didn’t want me to go steady with anyone, let alone a boy they hadn’t met. He wanted to give me a ring; he may have given it to me and I had to give it back. I’m no longer sure. In any case, we were not allowed to say we were going steady. He walked me home and we held hands and I never knew what the difference would have been if we’d called it going steady instead of nothing.

I couldn’t sleep at night, imagining him, just up the street, trying to sleep too. I tried to imagine him next to me, but the scene disappointingly faded to black, ending with an ellipsis before anything happened.

Our family was moving to a different city the summer after 7th grade. My parents bought a house and that was that. And it turned out that his family was moving away too. Even though we’d be living less than fifteen miles apart, we may as well have been at opposite ends of the earth: too young to drive and no way to see each other without involving parents, and I already knew my parents would never chauffeur me to his house in a million years.

At the end of the school year, one of my friends gave the two of us a going-away party. When I got to the party, he had a surprise for me. As a going-away present and a token of his love, he gave me a pair of his baby shoes: white leather, soft-soled, lace-up baby shoes. I don’t think his mother knew about this gift. It meant something special at the time, and I did keep the shoes for many years, tucked away in a box of mementoes and letters from my childhood. I was never quite sure why he thought his baby shoes would be an appropriate gift. He took a prettylong view for a thirteen year old.

We danced at the party — lots of slow ones. The kids hung around outside on the patio under the strings of lights draped overhead. Everyone gave us plenty of space while we danced. He never got up the nerve to kiss me. God knows he had the chance, and with everyone watching too. I bet he would have been a good kisser, maybe, with some practice.

Then my parents showed up and I had to leave. I had to leave my own party early. So unfair. But that was the way things were in those days.

At least I got to hold his hand…