This morning I flossed my top teeth, then the bottom. And when I was done with the bottom, I couldn’t remember if I’d flossed the top. I actually had to stand there a minute to see if the top teeth felt any different. That’s when I realized they tingled a bit from the minty floss.

Last week at work, I walked quickly and with purpose to pick up a document from the printer. I walked at a New York pace right past the printing room and into the kitchen. And I stood there bewildered, wondering why in the world I was there. I didn’t bring any change for a Diet Coke.

So I ask you … a woman with a lot on her mind? Or a sign that I’m one step closer to being spoon-fed Jell-O right before my sponge bath? 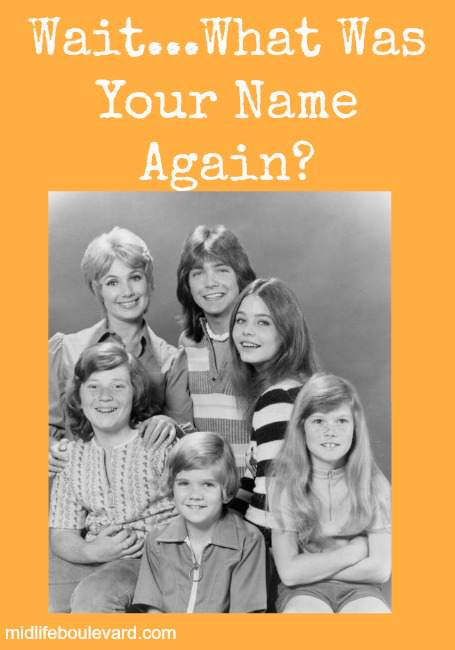 Two weeks ago I chaperoned my daughter’s high school Thespian team at the big regional competition. I met three really lovely moms, and one of them definitely acted like we’d met before. A few hours later, we were sitting in the auditorium waiting for a musical number to begin, when I saw her doing some realtor work and had this strange sense of déjà vu. I knew she was a realtor. How did I know that? Had I finally honed my psychic abilities?

“Mom, you are such a loser,” my daughter said on the ride home that night. “We were sitting with the other Danielle and her mom at the Lifetouch studios, when I was waiting to get my senior portraits done. You talked to them for half an hour.”

I had met this woman and her daughter just three weeks before, and I had no recollection of either of them – except that they looked mildly familiar. I just figured we’d run into them at the college fair or a parent-teacher conference. Once my daughter placed them, it all came back to me.

Sometimes I think life just gets so crazy, I don’t stop to take it all in. That’s what I hope this is, anyway … that I’m working full-time and trying to pursue this dream of being a writer at night, while still being active in my daughter’s life this last year before she heads to college … that I’m just tired or distracted and can still fix this train wreck.

I know I’ve gained weight, and my sleep apnea is back, and I hate that damn headgear I’m supposed to wear, because nothing says sexy like a catcher’s mask with an oxygen hose. So I don’t sleep well. And even when it’s not the apnea, I find myself awake at 3 or 4 every morning, panicking over how on earth we’re going to pay for college. I hope that’s what it is … that I’m just so exhausted it’s affecting my short-term memory.

Because the other explanation is terrifying: that my life is turning into a scene from a horror film – and I’m not talking about The Conjuring; I’m talking about The Notebook. Some people go to scary movies and can’t sleep for days, because they’re living in fear of Satan. I’m more terrified that I’ll be slow dancing with my husband, and right in the middle of Moon River, I’ll no longer remember who he is.

I have this recurring nightmare where I find myself in a meat market and I’m crying, because I don’t know where I am. And the butcher keeps asking me who he should call, but I can’t remember. So that’s the standing joke at our house.

“Oh my GOD, mom. Come back from the meat market.”

So here’s what I want to know. Why is it that I can remember all the lyrics to every commercial jingle from 1965 to 1995, but I cannot remember why I just walked into a room?

Why can I sing, “Oh Fab, I’m glad there’s lemon fresh and borax in you,” having no idea on earth what borax is, but I can’t remember someone with whom I had a conversation three weeks ago?”

I know that “Honeycomb’s got a big, big bite – big, big taste in a big, big bite,” but I can’t remember where my glasses are, until someone points out that they’re on my head.

A few years ago, I liked that song How to Save a Life, and apparently, I asked my daughter, “Who sings this?” every darn time it was on the radio.

“The Fray, Mom,” she’d say. “The same people who sang it yesterday.”

“Cuckoo,” she’d add, pointing at her head and circling her index finger.

But ask me to sing the entire Friday night lineup from 1973 … the theme songs from The Brady Bunch, The Partridge Family, Room 222 and The Odd Couple, topped off with a rousing rendition of Love American Style, and I’m all over it.

I remember the Andy Griffith Ritz Cracker commercial I translated into Spanish in the 7th grade and performed in front of the class for extra credit (“Mmm, mmm. Galleta Buena”).

But I cannot remember the name of the lady next door, her husband, her two toddlers, or her golden lab, without stopping to think about it for a minute. Wait, it is a golden lab, right? Or is it a black poodle?

I’ve been told the mind is like an incredible computer. The problem is, how do I hit delete? Do I really need to know all the lyrics to Kung Fu Fighting? I’d like to get that out and make room for something a little more important in there.

I used to get so angry when my grandmother went through every grandchild’s name in the book until she got to mine: “Uh, Linda … Diane … Alan … Scott … Parri. That’s it, Parri.” But that’s me now. Half the time I address my daughter, I start saying my husband Jim’s name first, and it comes out Janielle.

Oh my God. Maybe I’m overweight because I forget that I eat and eat again.

Here’s an even scarier thought:

You know all those missing socks?…

What if I’m the one hiding them?

I can totally relate, I even have my own CPAP, which I hate. My theory is that we have so much going on, our brain can't store it all. At work, I have a boss who hands me papers and then gives me a big verbal list of what to say to the customer about the report. I always have to have him repeat it, so I can write it down, or I immediately forget. He is older than me, but men don't have menopause brain.

Is that a real thing: menopause brain? Because as I round that corner, I think I'm starting to display symptoms! I think you're right about women having a lot going on. We're the schedule keepers for our families ... the appointment makers ... the meal planners ... the chauffeurs ... the homework helpers ... When you work full-time, too, maybe it's just unavoidable brain overload. I'd like to think that, anyway. Because I'm trying to stay out of that meat market!

Absolutely love this!!!! So true! And I had "Kung Fu Fighting" stuck in my head the other day...

NO WAY! What are the odds of that happening???

PREACH. I mean, I can remember every single 70s and 80s sitcom themesong, but not my GD pin number. It wasn't until I went to the bank to change the pin number that I remembered it. As always, you kill me.

I can't wait to meet you in person at BlogHer! I just know the two of us are going to click!

I'm right there with ya---on all fours looking for my reading glasses while they're sitting here perched on my head. We lose more brain cells as we get older. Triple that if you like your wine like I do! GREAT POST!!

And according to Dr. Amen from PBS, overweight people have worse memories. Yet another reason to diet!

This could have been me writing this. Down to every instance (except the sleep apnea, bt maybe I even have that and don't know it!) this is my life right now including the senior in HS daughter. I just now found ypur blog, but feel a definite connection, so welcome a new regular!

Wow! Welcome soul sistah! I am so honored to have you as a new reader!

"It started when I saw him on Facebook". Or he saw you. How many times have I heard that in...