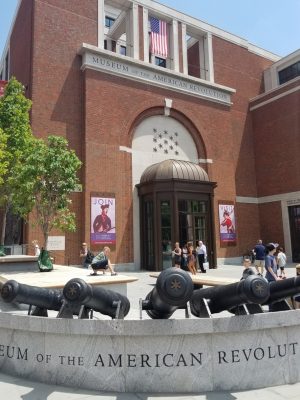 Those visiting Philadelphia to steep themselves in the early history of the United States will find the Museum of the American Revolution to be a worthy addition to “America’s most historic square mile”.

The Museum of the American Revolution, Philadelphia’s latest world class museum, opened in April of 2017.

I’m a life long Philadelphian and an unashamed history geek. When I was growing up, an immersive dive into the history of the American Revolution required a visit to the Valley Forge National Historic Park, some 25 miles northwest of Center City Philadelphia.

Valley Forge is where the bedraggled, cold, hungry and ill Continental Army under George Washington spent the winter of 1777-78 while the British occupied Philadelphia, then the nascent United States’ largest city and capital.  The small museum there held Revolutionary War artifacts, including George Washington’s campaign tent.

While the Valley Forge National Historical Park is still worth a visit and is quite lovely for a walk or bike ride among reconstructed soldiers’ huts and colonial era farm buildings, the Museum of the American Revolution at 3rd and Chestnut Streets in Center City Philadelphia is only two and a half blocks from Independence Hall and the Liberty Bell. Thus, it is easily included in a visit to the historic colonial Philadelphia area. 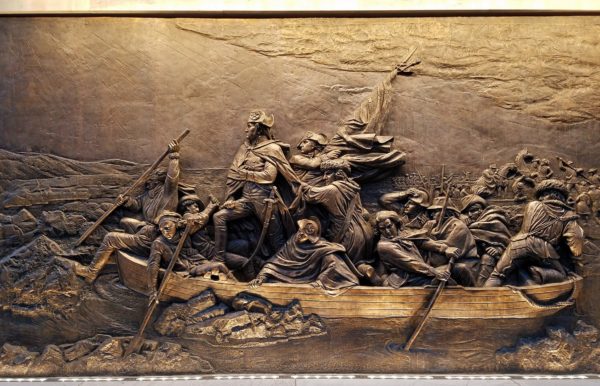 This frieze of General George Washington crossing the ice clogged Delaware River to surprise the Hessian troops at Trenton on Christmas Day, 1776, can be viewed outside the Museum of the American Revolution.

Mission of the Museum of the American Revolution

The museum’s website explains that its mission is to:

[tell the] dynamic story of the American Revolution using its rich collection of Revolutionary-era weapons, personal items, letters, diaries, and works of art.

The museum uses “immersive galleries, theater experiences, and recreated historical environments [to] bring to life the events, people, and ideals of our nation’s founding and engage people in the history and continuing relevance of the American Revolution.”

I recommend starting in the ground floor theater to watch the closed captioned introductory video which runs every 20 minutes. The film expounds on the basic themes of the Museum.

If you need to wait, as I did, this is a good time to scope out the adjacent museum gift shop. In addition to the usual tee shirts and souvenirs, the spacious shop has some artifact reproductions from the era. It also has a collection of relevant books which kept me happily browsing for the 17 minutes I had to wait.

George Washington found it difficult, but ultimately not impossible, to meld soldiers from disparate backgrounds into an effective, unified fighting force. In this diorama, he is breaking up a fight among members of his “army”.

The museum galleries are on the second floor, organized chronologically and by theme. Each gallery is filled with historical artifacts, staged mannequins, and immersive experiences such as short films. There is an impressive “you are there” flash bang exposition on the Battle of Brandywine.

The visitor is led through the history of the American Revolution, covering:

Becoming Revolutionaries (1760-1776): This gallery addresses the antecedents of the American colonies’ debates and  ultimate decision to declare independence from Great Britain

The Darkest Hour (1776-1778): This gallery chronicles the difficult years during which the former colonists faced repeated military defeats and internal conflicts as they battled the highly professional and powerful British force which was aided by Hessian mercenaries “rented’ by the British King George III from the German Landgrave (Prince) of Hesse-Cassel. 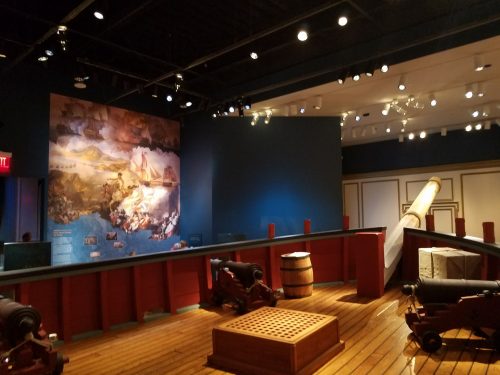 In an exhibit about naval warfare during the American Revolution, you can clamber aboard the deck of a “licensed” privateer ship.

A Revolutionary War (1778-1783): This part of the museum addresses issues germane to modern sensibilities such as how the Revolutionary War impacted enslaved Africans, women, and the Oneida Nation, a native American tribe that broke with the Iroquois Confederacy to join the colonial revolutionaries.

A New Nation (1783-present): This gallery covers the post-Revolutionary War period as the people of the United States live with a revolution that is “unfulfilled, yet enduring”. 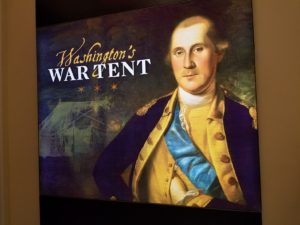 One of the Museum highlights is a dedicated theater featuring George Washington’s field tent, where the story of Washington’s leadership is recounted. Apparently, this presentation is quite moving, but I will have to return to see it as my visit was cut short by a power failure.

The power failure also prevented me from visiting the Museum’s Cross Keys Cafe. According to the Museum’s website, what I missed was: “colonial-era inspired dishes, locally sourced produce, a made-to-order barista menu, and seasonal outdoor seating.” Museum admission is not required to access the Cafe, so perhaps I’ll check it out for lunch one day.

If you  have a limited tolerance for groups of children, it is probably best to time your visit for after 2:00 p.m. during the school year.

Final Verdict: The Museum of the American Revolution is a well curated, visually engaging modern museum, covering a seminal aspect of American history. I spent over two hours here and would have stayed longer but for the power failure. It is a nice addition to the list of reasons to visit Philadelphia.

Help for Non English speakers and those with handicaps.

The Museum is accessible for handicapped individuals. Personal care attendants may accompany those in their care free of charge and service animals are permitted.

I was informed the Museum is working on translations of the Museum Guide and Map into Mandarin, French, German, Spanish and Japanese which should be available shortly.

The Museum is also planning to produce audio guides in various languages, and hopefully, in English for use by the visually impaired.

Based on my experiences in world class museums, audio guides would be an excellent addition to the Museum of the American Revolution experience, even for those for whom English is a first language. I sometimes had trouble being able to read all I wanted to in the galleries because others were blocking my view. There was also an “interactive” feature that I don’t believe worked well. It requires the visitor to lift a cover to read information, pretty much limiting it to use by one person at a time.

With audio guides, it is also possible to add additional content for those who would like more information about particular topics.

The Museum has a helpful website with a portal to purchase timed tickets. Timed tickets are  good for two days. At present, adult admission is a fairly steep $19.00 with discounts to $17.00 for certain classifications. There is reciprocity with some other national museum memberships.

The Museum is closed on Thanksgiving, Christmas and New Year’s Day.

Looking for more Revolutionary War related sites to visit in and around Philadelphia?

Have you visited the USA’s “most historic square mile”? Does the Museum of the American Revolution sound like one that would interest you?

Keto Breakfast Recipes Eating Keto? A Keto diet is one that's focuses on good fats and proteins and low net...