Looking down at the desert and the distant Dead Sea from the top of the mesa at Masada, Israel. Probably not a good spot for acrophobics. The square to the right was a Roman siege camp.

Based on my pre-trip planning for our visit to Israel, I knew we wanted to include the ancient fortress of Masada and the nearby Dead Sea.

Fortunately, my husband’s Israeli cousins kindly offered to pick us up at our hotel in Jerusalem for the hour and a half drive south to the UNESCO WORLD HERITAGE SITE of Masada. 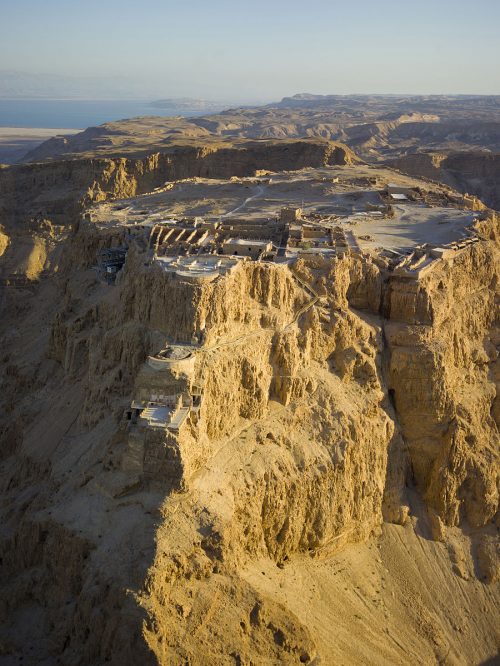 An aerial view of the fortress of Masada in the Judean Desert southeast of Jerusalem. At the front of the photo is King Herod’s “hanging” palace, c. 50 A.D. (Photo by Andrew Shiva, CC Lic. 4.0)

Masada is an ancient fortress atop a formidable desert mesa. It was built by King Herod of Judea (73 – 4 B.C.) .

Despite some major failings as a human being (i.e. being paranoid and murderous), King Herod had great vision as a builder. Back in the tumultuous times of King Herod’s reign in what is now the nation of Israel, being paranoid did not mean they were not out to get you.

Aware of his significant list of enemies, King Herod ordered the construction of Masada. It had a multi-level “hanging’ palace, storerooms, and water cisterns within siege worthy battlements.

King Herod was a vassal king of the Romans. After his death, Rome’s rule became increasingly onerous and persecutory for the Jews in and around Jerusalem, their holy city.

In 66 A.D., the Jews began a violent rebellion against the Romans and in 72 A.D., a group of about 960, including wives and children, sought refuge at Masada, Herod’s old desert stronghold.

The rebellion was brutal and violent on both sides. The Romans were intent on wiping out the rebels. They besieged the Jews on Masada with an estimated force of 10,000 troops.

With access to King Herod’s long abandoned food stores and water system, it became clear  the Jewish rebels would not be starved into submission. The Romans constructed a ramp up the mesa and managed to breach the walls of the Masada citadel.

To this day, one can stand atop the Masada mesa and see the outlines of the Roman camps, their ramp and the breach in the defensive wall. The Masada defenders did not have to depend solely on King Herod’s 100 year old food stores. They had access to fresh meat from this dovecote. Part of the stark view from atop the Masada mesa with another one of the eight Roman siege camps that ringed the fortress on the left.

Based on a roughly contemporaneous account by Flavius Josephus (a Jewish rebel who eventually sided with the Romans), when it became obvious defeat was certain, the leader of the rebels on Masada (Elazar Ben-Yair) and his followers decided to take their own lives and those of their families rather than submit to the Romans.

There has been recent conjecture by even Israeli historians as to the veracity of this heroic version of the events at Masada; however, there is no doubt people lived and died there during a tumultuous and disastrous time for the Jewish people.

Masada is an imposing natural and historic monument that should be part of any visit to Israel. The wimps’ way up to the top of the Masada mesa–by cable car. The Snake Trail is visible to the right.

Depending on traffic, it is about an hour and a half to two hour drive from inside Jerusalem southeast to Masada. If you don’t have nice relatives who volunteer to pick you up at your Jerusalem hotel and drive you to Masada, it is well worth arranging to be taken there by one of the many day tours that leave from Jerusalem. A rented car and a public bus from Jerusalem are other options. There is a hostel at the site and many Dead Sea resort hotels a short distance away. Are we there yet? Notice me clinging to my water bottle. I had to borrow a hat. There were not too many people wearing black atop Masada, but that was my most “breathable” clothing.

Everything I read about visiting Masada admonishes visitors to wear breathable clothing, sun block and good walking shoes. Masada visitors are also encouraged to bring a sun hat and plenty of water. This is especially true if you plan to hike up the switchbacks and stairs of the Snake Trail to the ruins atop the mesa during the heat of the day.

Many choose to hike up the Snake Trail before dawn to avoid the heat and to be able to watch the sunrise.

We arrived at the Masada site at around 11:15 a.m., We  wisely opted to take the cable car  to the top of the mesa.

Our relatives recommended the audio guide. We were glad to have that narrative even though there are explanatory signs in English throughout the ruins.

We spent only an hour and a half traipsing around the Masada site because I am a lightweight when it comes to dealing with heat and that was pretty much my limit.

Some paths through the ruins are ostensibly paved, but be prepared for rocky, uneven terrain and some climbing up and down steps. The site is only partially accessible for those in wheelchairs.

There are a food court, gift shop and a museum in the Visitors’ Center complex on the east side of the Masada mesa, next to the cable car and start of the Snake Trail.

I was sorry we did not have time to visit the museum. Most people recommend it, but there is a split of opinion as to whether to do so before or after your visit to the ruins. (Note: The cable car is only accessible from the east side of Masada.) As always, it is important to check for the latest opening schedule and costs.) Watching other people float effortlessly in the Dead Sea.

Like Venice, the Dead Sea is one of those places you should move up on your bucket list so you can see it before it’s gone. While Venice is being drowned by a rising sea level, the Dead Sea is evaporating at an alarming rate.

At 1,388 feet below sea level, the Dead sea is the lowest altitude on land. It is worthy of a stop during a visit to Israel.

Even if you are just doing a day trip from Jerusalem, you can combine a visit to Masada with the chance to float effortlessly in the nearby Dead Sea, the lowest body of water on earth.– doing everything in your earthly power to not get water in your eyes.

Our relatives purchased vouchers that let us use the facilities at the Crowne Plaza Hotel which has direct access to the Dead Sea. Some people look better in Dead Sea mud than others.

We passed on the chance to actually float in the Dead Sea. Based merely on touch and taste, I can confirm the Dead Sea is  extremely salty and feels oily.

We chose  sit on a beach chair and watch other people cover themselves with Dead Sea mud because someone told them it is good for their skin. Naturally, you can buy Dead Sea mud skin care products in every Dead Sea gift shop.

(A version of this post earlier appeared in Boomeresque).

What was the most moving historic or natural site you have experienced near home or during your travels?

Thanks for this narrative journey. I hope to go there someday.