Tam Warner Minton is an enthusiastic, midlife adventurer who loves life, scuba diving, traveling, and exploring the world. For Tam, the unexpected is usually the norm! You can find her travels and life journeys at Travels With Tam.

Earlier this summer I posted about my visit to the LBJ Presidential Library at the University of Texas in Austin, Texas. It was such a great experience, I decided that as I headed from Dallas to Ohio and Kentucky, I would stop and check out the Clinton Library. I am so glad I did, as it was fascinating on many levels. In addition to the library itself, the museum is currently hosting a Chihuly glass exhibit! It was a very enjoyable day.

During the campaign for the Presidency in 1992, Bill Clinton went on talk shows and played the sax. He also played at his inauguration ball.

I think I can safely say we all miss the booming 90s economy!

The Clintons failed to pass their Health Care Reform Bill….but I think there might be time for them to do this. (I believe Hillary Rodham Clinton will run for President). 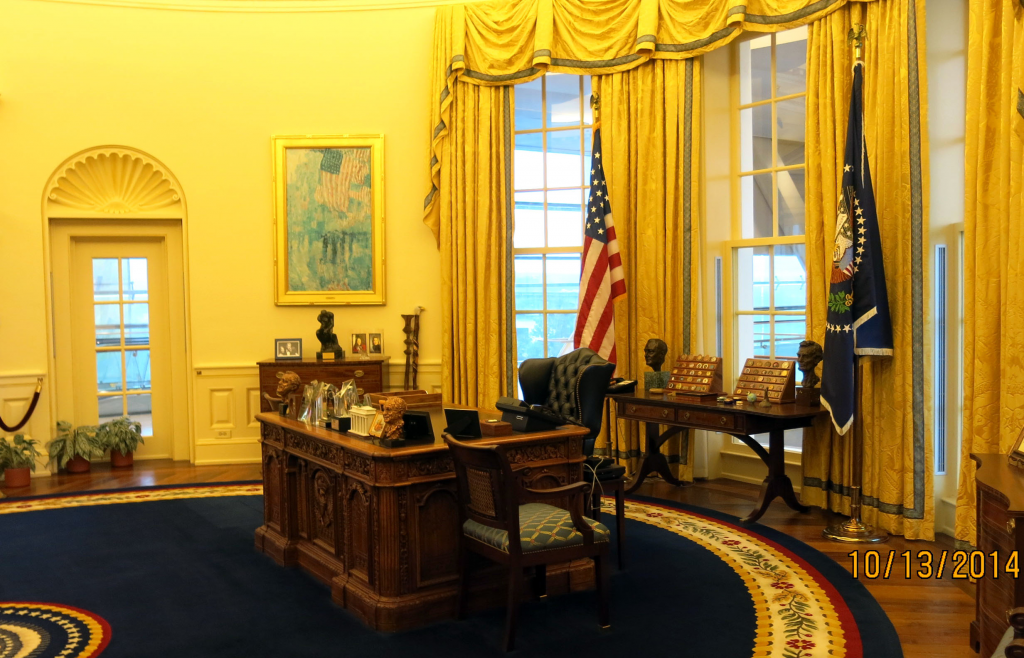 Internet (and yes, Al Gore was instrumental in making it available to everyone, not just scholars).

The digital age was truly born during the Clinton years. I remember getting our first PC Christmas, 1993. My son, Wes, wanted to constantly play with the Dinosaur disc it came with.

The 1990s witnessed the growth of antagonism in political debate. The President was vilified by the Right, led by House Speaker Newt Gingrich. I miss the days when politics could be discussed calmly, without rancor. The vituperative discourse has only grown worse.

I miss the days when you could have an opinion without sending someone into orbit.

The replica of the Oval Office was extremely interesting. Two things caught not only my interest, but my fascination. The first of these was the collection of “challenge coins” behind the desk. These are a small portion of Clinton’s collection, he has over 400 challenge coins that have been presented to him. A challenge coin is a small coin or medallion (usually military), bearing an organization’s insignia or emblem and carried by the organization’s members. Traditionally, they are given to prove membership when challenged and to enhance morale (Wikipedia). When President Clinton visited military installations, service areas, etc, he was given a challenge coin. He saved them all, and has the largest collection of any President. 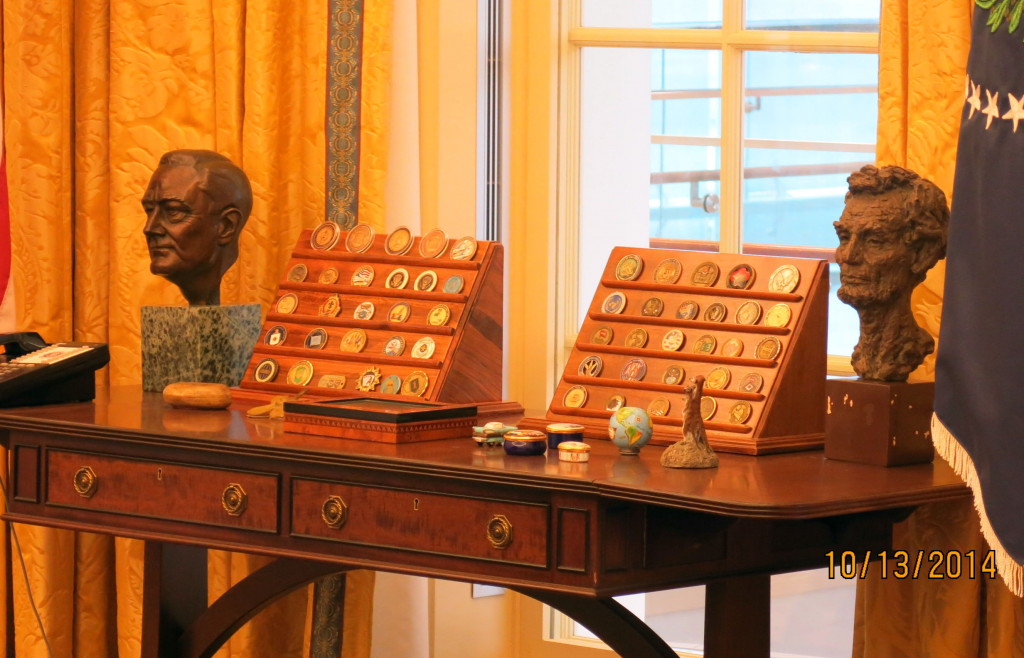 The second most interesting part of the history of the Oval Office during the Clinton years surrounded the Resolute Desk. The Resolute Desk is very famous, for several historical reasons. First, there are six Resolute Desks, made out of the HMS Resolute (Her Majesty’s Ship) which foundered in the ice of the Arctic, which it was exploring. It lay frozen in the ice for several years, and when rediscovered, Queen Victoria had several desks made from the wood of the ship. Four desks were designed and made by William Evenden. The desk in the Oval Office (currently used by Barack Obama) was presented to President Rutherford B. Hayes on 23 November 1880. A small “lady’s desk” was presented to the widow of Henry Grinnell and this desk is now in the New Bedford Whaling Museum. Queen Victoria had two desks made for herself: one similar to the one given to the president and people of the United States, currently in Windsor Castle; and a writing table, which she had made for her private yacht, HMY Victoria and Albert II. The writing table is in the Royal Naval Museum, Portsmouth.

Now, the Resolute Desk was made very famous by President John F Kennedy Jr. His son played beneath the desk, where a “filler” partition was made and inserted by Franklin Delano Roosevelt. FDR did not want others to see his crippled legs, so he added the hinged center piece with the US Eagle so it hid his disability. Look at the photo below, of the Eagle, closely. 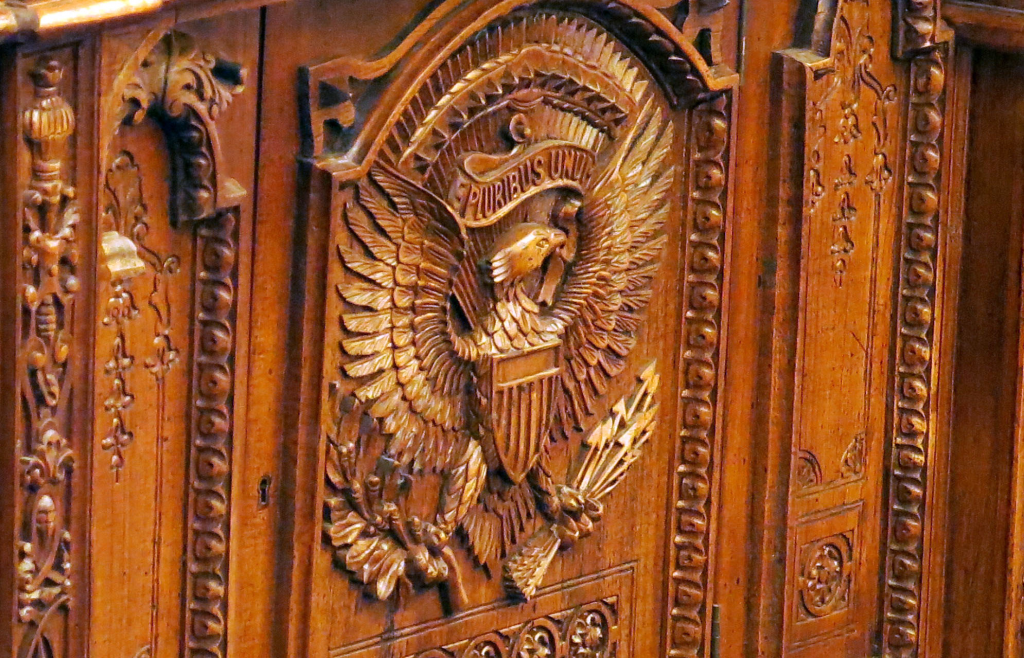 My trip to the Museum was fascinating. I loved hearing about the history of the challenge coins and the Resolute Desk. The Presidential Libraries were historically fascinating, representing not only the presidencies but the “times”. I do realize that there is a brand new Presidential Library within 5 miles of my house in Dallas. I am not ready to tour that museum…but I’m sure I will be someday. Those days and “times” are still too close for my comfort….