As we move forward into 2016 everyone’s looking for those healthier recipes that are still delicious and satisfying. I’ve got the perfect vegetarian egg scramble that’s so simple to make. I used mostly egg whites and only 1 egg. I found adding just one egg really makes a difference.  This scramble comes together really quickly once the onions and bell peppers are cooked in the microwave.Each serving has 179 calories, 5 grams of fat and 4 Weight Watchers POINTS PLUS. 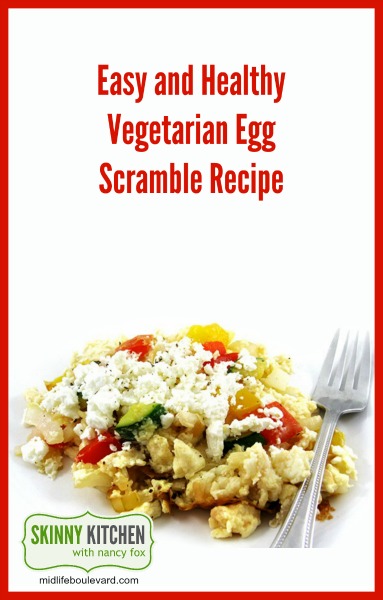 Salt and pepper, to taste

1. On a microwave safe plate add onions and peppers. Cook for about 4-5 minutes until soft.

2. In a nonstick pan, melt 1 tablespoon of reduced-fat butter. Add cooked onions and peppers and sauté over medium-high heat until onions are golden, about 2-3 minutes.

3. In a small bowl, whisk together the egg whites and egg. Pour them into pan. Scramble until cooked.

4. Divide egg mixture among 2 plates. Sprinkle 2 tablespoons feta cheese on top of each.  Add salt and pepper (optional) – to taste.

Substitution Tip
If you only want to make this scramble using egg whites, use 8 (1 cup) instead of 6 egg whites.

In addition, you can use all red bell peppers or all yellow. I used the combination for color.

Thanks for sharing my egg scramble. It's an easy and yummy way to start the day.

With my warmest regards, Nancy

Hélène Tragos Stelian writes about midlife reinventions on her blog Next Act for Women. Connect with her on Facebook and...