Not since turning 21 in the 20th century have I been this excited about a birthday. On June 14, 2016, I officially became a Golden Girl. I’m turning 65 years old.

That’s two years older than Bea Arthur and Betty White were when their show The Golden Girls premiered in 1985. 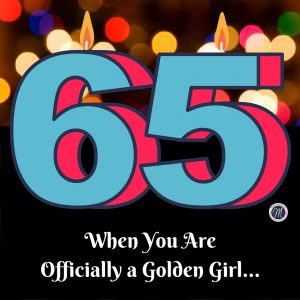 I have so looked forward to turning 65. Like my 21st birthday, this one comes with perks.

Some of My Favorite Perks of Turning 65

While my 21st brought legal drinking and the right to vote – the 26th amendment giving 18-year-olds the right to vote wasn’t ratified until I was the ripe old age of 20. This birthday brings the enormous health care savings of Medicare and lots and lots of fun discounts.

Last week taking the light rail to the airport during non-peak hours cost $1.75. Now when I ride the light rail during those hours it will just cost me 75 cents.

A month ago if I wanted to join the YMCA it would have cost me $66 a month. Thanks to my medicare supplement Silver & Fit plan, membership is covered. How cool is that?

On June 13th, if I wanted to take a Pilates Chair class at one of my favorite Pilates studios it would have cost me $35 a class. Thanks to their senior program, it now costs $12.

Let’s not forget discount movie tickets and senior discounts on airlines, restaurants and other establishments. I’m feeling the senior love.

So while some other milestone birthdays were sobering – I definitely felt the weight of my fortieth and fiftieth birthdays – turning 65 feels liberating. It’s like getting a gift every time I get to make a discounted purchase.

65 is going to be my gift that keeps on giving.

I can't wait until I turn 65! I will save about $1,000/month on health care, what's not to love about that? Also according to my accountant I can sell an item I have that is worth some big bucks because my tax rate will go down too. Happy birthday to you and hope you share more of your senior surprises!

Interesting way to look at it -- I turned 65 a few years ago and never thought much about the discounts. I will have to look into that. Thank you

Congratulations on reaching this milestone--and your great outlook on all the positives! I'm counting down (two years to go) and SO looking forward to the health insurance savings. All the other discounts you've identified sound pretty darn good, too!

Great positive outlook Elana -- looking for what is and not what is not. Good for you! And Happy Birthday...

Thanks for the birthday wishes - I'm now officially one month into being 65 and so far so good. While I am naturally wired to be a more positive person than negative I've noticed a significant shift since I hit 60 - Because time is more precious, I focus on gratitude - it makes a difference because a grateful life is a meaningful one.

The Importance Of Blogging Etiquette

Carol Graham writes at Never...Ever...Give Up Hope. You can find her there sharing laughter, inspiration and other stories of perspective,...