The other week when Sharon and Anne, co-founders of Midlife Boulevard, suggested that members of the Women of Midlife Facebook Group follow each other on Twitter and Instagram by leaving links to their accounts, I thought, “booyah!” 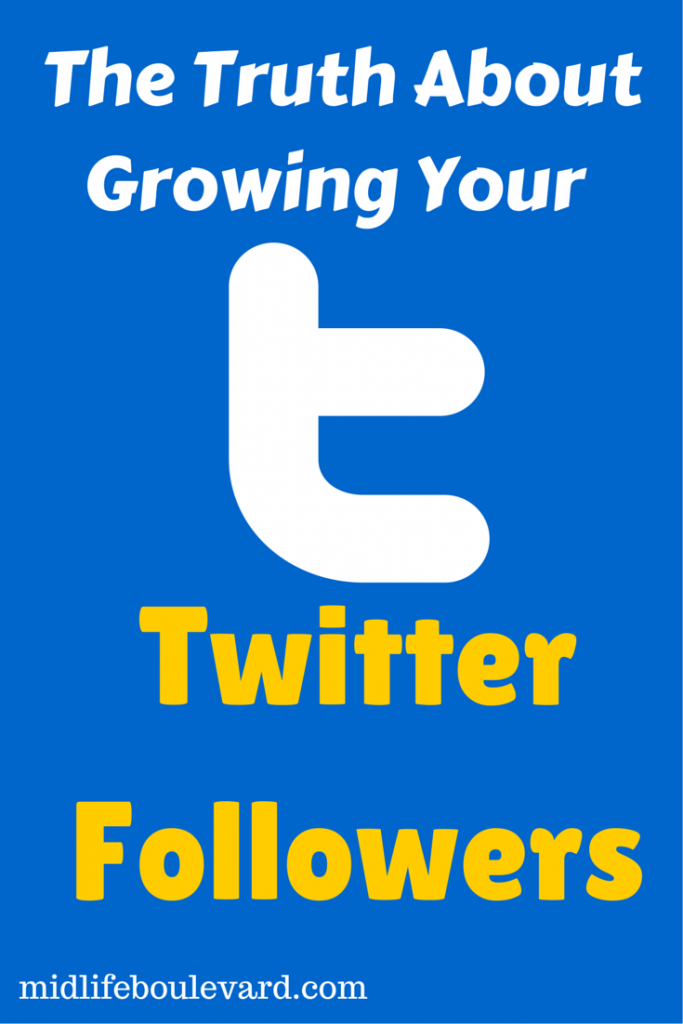 Because here’s the way it really is with Twitter these days: most of us aren’t going to add more than a couple of thousand followers from year to year. Many people with perfectly wonderful Twitter accounts, people who say smart and funny things — people to whom the world should be listening — won’t get even that many.

Take Beverly Gooden (@BevTGooden), a domestic violence survivor, started the hashtag #WhyIStayed. Beverly has appeared on just about every news program and talk show. She has opened a crucial conversation. You’d expect her to have SO MANY followers. But at the time I’m writing this, she has under 7,000.

People with lots of Twitter followers are generally either really adopters or celebrities. (In its early days, Twitter basically gave followers to certain people.)

For most of us conversation — talking to each other within this wonderful community — is the true value in our accounts.

Still, numbers do count. (Audible sigh.) If you’re looking to make some money from blogging, the brand you hope might pay for an ad or ask you to write a sponsored post  is going to look at your stats.

Luckily, you can raise your numbers — and if you work hard enough at it, you may see a hefty bump. Some of these methods are more kosher than others. It’s your account and your choice.

1. Follow everyone back. Lots of people on Twitter follow you just to get a follow back. For many, following everyone is a good practice. If you’re a marketer or if you have something to sell, you never know who of your many followers may be interested in what you have on offer.

Caveat: It’s possible in Twitter these days to “mute” someone you follow. So it looks like you’re following someone, but you never see anything that account tweets. Many accounts who follow thousands never see tweets because they mute most accounts they follow, or put them on “lists” they never look at. Also remember that you don’t look as influential if you’re following as many as or more people than the number who follow you.

Here’s who should make a point of following back: Marketers and community builders (like @MidlifeBlvd).

2. Use a tool that helps you find the right people to follow. Several third-party tools help you mine Twitter for people who are going to follow you back and be interested and valuable. Most of these tools cost money — but there is generally a free trial. I suggest Spider by OneQube because people say it works. (Full disclosure: I know and adore the guys who made this tool, but I do not use it.)

Caveat: Even $49.99 a month is not worth it if you aren’t accruing worthwhile followers. Always measure how much you’re spending against the value you’re getting in return.

3. Try what’s called “growth hacking.” True growth hacking involves an understanding of SEO and virality and doing something like Dropbox did: offer more free storage for friends whom users referred. In Twitter, growth hacking often involves following people and then dropping them after they follow back. Tools like Commun.it (which is free, but uses your info to growth hack themselves) and SocialBro (which I use, and it has a free trial) help you keep on top of who has followed you and who unfollows you.

Caveat: Make sure you’re getting a return for your investment.

4. Buy followers. Typing those two words made me ill, and I don’t really think people should buy followers. Nevertheless, data scientist Gilad Lotan determined that, in the longterm, buying followers had a measurable positive effect on his Twitter and other digital rankings.

Caveat: This is so sleazy, and there are many tools that unmask fake followers. People even lose jobs for buying Twitter followers. Don’t do it — unless you can mimic everything Mr. Lotan did.

5. Tweet regularly, retweet others, don’t automate constant self-promotion, and engage with your followers. Tweets are ephemeral, so if you tweet twice a day, most everyone will miss everything you say. Scheduling tweets (which is different from automation) makes sense for us all. Hootsuite and Buffer are great and have free versions. Find interesting content, and when your followers retweet you, their followers will say, “hey, this is an interesting person to follow!” When you answer a tweet, people think, “here’s a keeper.”

To be truthful, I don’t work too hard at growing Twitter followers. I use Twitter to talk to people. But would I like to be an influencer and 100K followers? Sure! Maybe I had better start taking my own advice.

I think my two least favorite methods are "buying followers" & "growth hacking". I've just recently started to try growing my Twitter followers. It seems that engaging with them & the content they share, as well as sharing good content on my feed works best.

The "mute" option is a great tool, I love that one!

I recently closed my Twitter account because frankly it is incredibly stupid. I am sure there are many people with successful Twitter accounts(celebrities, vlogger wanna-be celebs, brands) but for the average person it is useless. You have to be an actual somebody to have your voice heard.

WHAT TO DO WHEN TWITTER BLOCKS you from following new people? apparently they have a follow limit, approx 2000, until you have as many followers, they won't allow you to follow anyone, I only grow organically by being active on twitter, every week I add a few more followers 5-6 at most, i'll try some of the methods you recommend, twitter recommends unfoloowing some folks, however, i've always curated who I follow, so I know that each or 2000+ people I follow I WANT to keep following. how do I get twitter to release my account?? Darrel3000

Hi Darrel. Twitter set the number of accounts someone can follow at 2000, until that person has over 2000 followers. This was done with spam control in mind, but people who just want to follow lots of people often run into problems with this until they are able to grow their own following beyond 2000.

The best thing to do here is to unfollow people, even if you think you're following them for a reason. 2000 accounts is a lot to follow unless you have good control of your Twitter lists. Otherwise, it's a lot of information in your stream.

My guess would be that some of the 2000 you follow could be unfollowed. One of the first things to look at is "dead" accounts, that is, people who haven't tweeted in at least 6 months. Chances are, that account has stopped tweeting. Remember: you don't have to follow someone to have that person in a list. So why not put all the "dead" accounts in a list, unfollow, but check the list every now and then to see if anyone has come back to Twitter. You can always refollow.

A good tool to help you manage your account is Social Bro. They have a free trial, so take advantage of that.

Leaving Behind a Lasting Legacy

Diane Howell Topkis is the author of the Career Clarity ebook series. Diane works with midlife women to gain the...