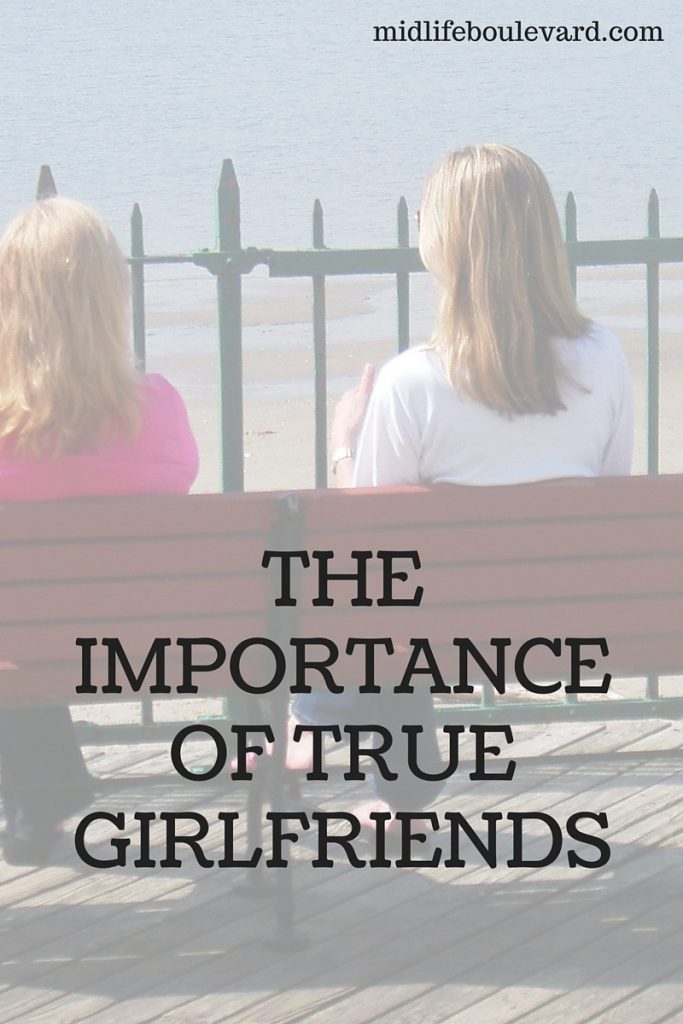 Barbara writes freely about her sense of humor and positive attitude as she takes on life in her 60s over at Zero to 60 and Beyond. This post was originally featured there.

I was never in one place long enough to make many friends growing up, especially close girlfriends. But sometimes, even when it seems completely unlikely, friends find their way to each other.

When I was seven my uncle met the love of his life. He was eighteen and she was ‘an older woman’. Not only older, she was a divorcée. Of course, my own mother was on her third marriage at the time, so it was mostly unnoticed at our house.

The love of my uncle’s life became my surrogate mother for many years. And through her I met my very first best friend, who was my new aunt’s ex-niece. Can you follow? I know it’s confusing.

Anyway… it was the most unlikely pairing. She was in the one school district I never attended, so it was pretty amazing that we were able to sustain the friendship. Let it be known that good friends sometimes require extra effort. Kismet.

After high school I got married and moved several states away. We lost touch for about twenty-five years. I honestly can’t remember how we found each other again, but we did. Things had changed a lot in both our lives. She stayed in Toledo and I had moved over ten times within several states by then.

But, as is often the case with friends of the soul, we, initially, felt as if there had been no lapse at all. Then, after a few reunions, we realized our lives were very different and drifted apart again. Life happens and it changes all of us in different ways. No harm, no foul.

With all the moving around due to my husband’s career, I still managed to find good friends. I believe it is so important, especially for women, to have a close friend and confidante. Men have buddies. Women need girlfriends.

We need friends you can share the gamut of emotions with and never worry about judgment. Friends you can miss for a while and catch up with immediately after reconnecting.

I’ve found this process can get more difficult as we get older. Maybe we’re only wired to have X amount of friends before the powers that be say, “So sorry… you’ve exceeded your limit of girlfriends.”

One of the most amazing aspects of social media has been the reunions of lost friends. Being able to reconnect and catch up on each other’s lives is enlightening and heartwarming. Truly, finding a long lost friend makes me so happy.

A few years ago I was a primary partner in The Blogstress Network, with Lee Sequeira and Doreen Creed. It was an online group for bloggers. We made a good effort and our hearts were in the right place but it was more work than our small group could manage while sustaining our other jobs and personal blogs.

With that said, I have to tell you about an amazing group I’ve found. The Women of Midlife is a group of, well, women of midlife. But they, individually, write for a variety of publications and internet sites, as well as having their own blogs and a Facebook and Twitter group. Having tried to do what they do, I know how difficult it is and admire them greatly.

I discovered them through an author and blog friend, Doreen McGettigan, who told me about their Facebook page, and their first blog conference, BAM, Bloggers at Midlife. We made plans to go, but the weather wasn’t on our side and we didn’t make it.

Despite not being there, I honestly felt as if I had. They were all sharing the experience through Facebook and Twitter, posting photos and stories that made me feel as if I were actually attending.

Since the conference ended I’ve gotten to know many of these amazing women more and feel a real friendship. I’ve never seen a more generous spirit between women than with this group.

When I wanted to try my hand at writing for Huffington Post, this group led the way for me. I got expert advice and assistance which helped me get published there. A Huge stepping stone for future writing gigs, not to mention getting the memoir published.

I am an Artist, Illustrator, Writer, Children’s Book Author and, Blogger. I love doing all of it.. Blogging helped me get through my 60th birthday with a great attitude and look forward to many more. As an entrepreneur I’ve owned a modeling agency and a health spa. I’ve sold advertising for major market radio and newspapers. It took me till midlife to realize I’d been given some amazing gifts and needed to honor them. The rest is history. Check out my books: <a href="//www.zeroto60andbeyond.com/my-books/the-duffy-chronicles/">The Duffy Chronicles</a> and <a href="//www.zeroto60andbeyond.com/my-books/while-you-were-sleeping/”target=_blank">While You Were Sleeping</a>

I hope to get to a BAM conference some time. Blogging has introduced me to many wonderful women (and men even). I've learned that even virtual friends can be a port in the storm. Write on!

You would love the conference, Suzanne! And yes, virtual friends are great. b

It is a wonderful group! I'm so very glad to have finally met you at BAM this year. Women do need women friends!

They really do, Jennifer. I was so happy to make it this year and meet so many amazing women, like you! b

Judy writes regularly over at A Baby Boomer Woman's Life After 50. This post was originally published there. My boyfriend...