I’m a proud Philadelphia native. Philadelphia has a credible claim to having the most historic square mile in the United States. I grew up being learning about William Penn who founded the city in 1683, and taking school trips to Independence Hall. There, 13 British colonies broke away from Great Britain in 1776 to ultimately form the Unites States of America. In the same building, the Constitution of the United States was debated and adopted in 1787. Thus, as a very young person, I could travel through history without leaving my home town. 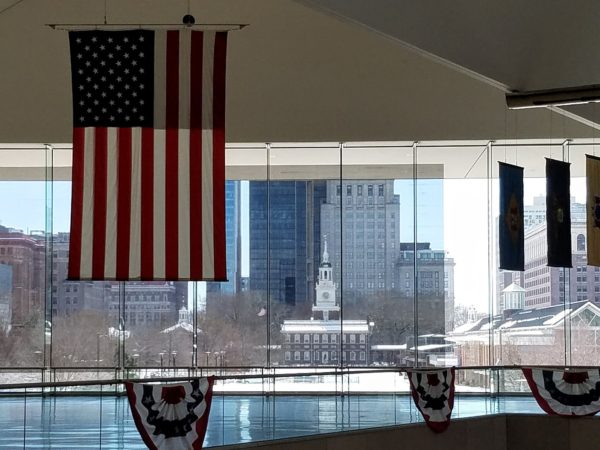 The unassuming Independence Hall, site of momentous history, seen through a window in the National Constitution Center on Independence Mall in Old City Philadelphia.

History was always my favorite subject in school and history was one of my college majors. I find that learning about the history of somewhere we are planning to visit greatly adds to my appreciation of the trip. To this end, I usually try to read at least one book about the history of a place before we arrive. I highly recommend this practice as an enhancement to travel.

In 2005, thanks to Mr. Excitement’s work travel, we had the good fortune to be able to cobble together an itinerary that epitomized the concept of travel through history.

As our British Airways flight from Cyprus to London banked over the Thames River heading for Heathrow Airport, I peered out the window, half listening to the flight attendant’s familiar pre-landing litany about seat backs being in their upright position, tray tables locked, and hand luggage stowed.

The flight into London was our penultimate flight before returning to Philadelphia after a three-week trip that included visits to Barcelona, Prague, Cyprus, and a Greek island cruise. In addition to magnificent scenery, delicious ethnic cuisines, and the kindness of people we met, our itinerary provided a window into history and politics.

On the island nation of Cyprus, we were startled awake at  5:30 a.m. one day by what sounded like air raid sirens. Oh dear. At breakfast, we learned they were indeed air raid sirens. They were sounded to commemorate the anniversary of the 1974 Turkish invasion of Cyprus. Our hotel in Nicosia was a few blocks from the Green Line dividing the Turkish-occupied north from the Greek Cypriot south. To this day, the Green Line is still patrolled by armed United Nations peacekeepers. 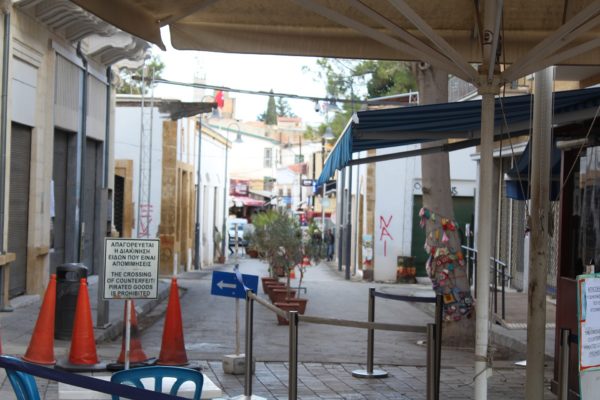 Despite subsequent significant economic and professional success, Greek Cypriot friends forced from their homes in the Turkish-occupied north remain bitter at having been made refugees in their own country.

We saw towns with mosques next to churches, but on one side of the Green Line, the mosques were silent and on the other, the churches were still. We learned that over 32 centuries, Cyprus had also been invaded and occupied by Greeks, Assyrians, Egyptians, Persians, Romans, Byzantines, Lusignans, Venetians, Genoese, Ottomans and the British. 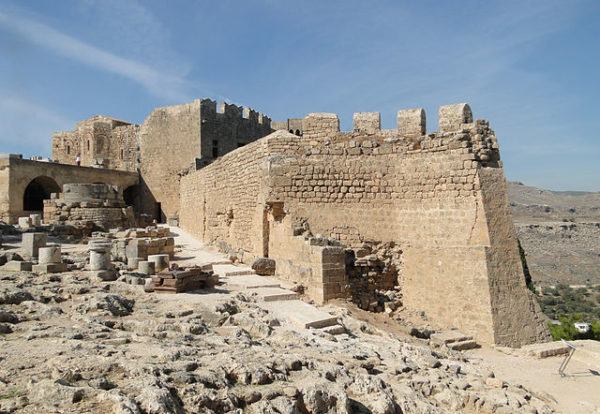 A visit to the acropolis atop a hill in Lindos on the Isle of Rhodes, is an impressive reminder that a visitor is traveling through history. Successive conquerors left remains.  (Photo credit: Wikimedia, Bernard Gagnon, C.C. Lic. 3.0)

During our visit to Barcelona, we found this lovely city in Spain proudly preferring Catalan to the predominant Castilian Spanish language, in reaction to the not-so-long-ago fascist attempt to erase Catalunya’s culture and language. We learned that throughout history, Barcelona also experienced waves of invaders and occupiers.

At the center of Europe, Prague was also a sought-after prize. On one side of the famous Charles Bridge over the Vltava River, a tower still shows damage done by invading Swedes in the 17th century. As a reminder of the latest occupation, crumbling Soviet-era concrete apartment buildings ring the beautiful city center. 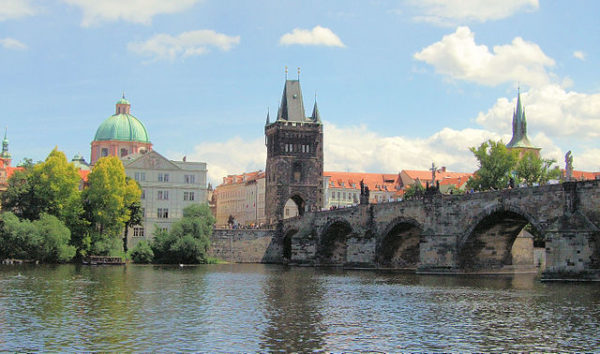 In every country we visited, many of the magnificent ruins were ancient fortresses atop steep hills where archaeologists had uncovered layers of construction and destruction by successive conquerors. These ruins stand as mute reminders of the avaricious, intolerant, brutal side of human nature.

As London’s iconic Tower Bridge passed beneath us, the flight attendant kept speaking, off script now, informing us that during our flight, four more explosive “devices” had been found on public transportation.

As I shuddered and wondered what this world is coming to, I realized that the saddest lesson of our journey was, “The more things change, the more they stay the same.”

Where and when has learning the history of a place and its people enhanced your travel experience?

How to Tell If You’re in Perimenopause

Over Forty? Have These Symptoms of Perimenopause? It’s a standing joke that everyone starts to go downhill at age 40,...