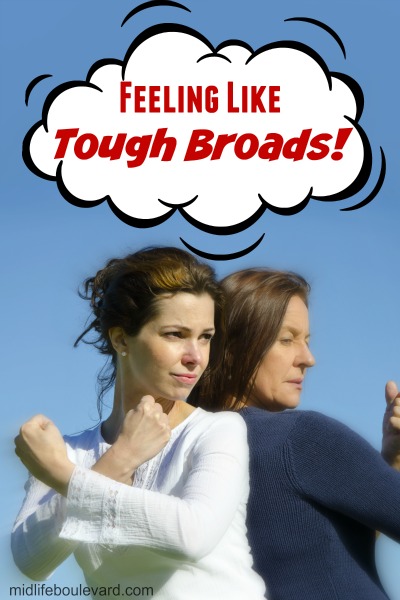 Ever since my daughter, Jade, was a little girl and we both had to use a squat potty on a trip to visit her dad’s family in Malaysia, we’ve jokingly called each other tough broads.

It expanded during her Girl Scout years when we named a rainy weekend camping trip the Tough Broad Campout. Whenever we said this it was followed by pounding on our chest, then a thumbs up, saying, YOU ROCK.

This past summer, my baby girl moved to Chicago to follow her dreams of someday becoming a comedy writer. My sweetie and I u-hauled her stuff up North (meaning Steve did all the driving and heavy lifting). We spent a few days visiting my only child in the windy city, 1000 miles away. I have always supported her move, but have had my motherly concerns.

I was concerned about where she lived. She has a teeny, tiny, expensive bedroom with an even tinier kitchen in the big city. It’s called a studio apartment. But she did her research and she was right. Lakeview is a great neighborhood; full of people her age, full of beautiful homes and full-sized apartments. While rent may be high by Baton Rouge standards, it’s good for the area she’s living in. I’m actually relieved she’s not in a bigger, cheaper place in an edgier part of town.

I was concerned about comedy being a pipe dream. Part of me wants her to get a “real” job with real benefits. But again she’s done her research and is well into classes with The IO Theater, a comedy company with a serious lineage. This is her graduate school and it took this trip for me to see it that way. No matter what her career eventually evolves into, she’ll be able to use what she’s learning.

I was concerned about her getting stuck waiting tables. She’s working at an upscale Irish pub a short walking distance from her place. She was right when she said it was a good place to work. The food and drink are great. But more importantly it’s well run and the staff is warm and welcoming. This job allows her to pursue her passion, to pay all her bills and even have a bit extra at the end of the month. 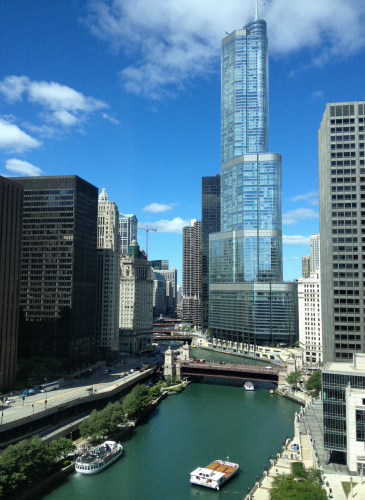 I was concerned about her being so far from family and friends. On my last night in the city, I went with her to see one of her friends perform on a small stage in a basement venue. The crowd was small, but everyone was cheering for their friend on stage. Most of these new friends were from Baton Rouge, connected by old friendships. I realize while my daughter is embracing all things new and different, she has found a supportive, understanding family with her new tribe. A tribe who understands the importance of both, Mardi Gras, and following your dreams.

I was concerned about the upcoming winter. The Chicago winter continues to be the main subject that everyone, from Baton Rouge friends to Chicago Uber drivers, issue dire warnings about. It is something we talked about when she began to consider moving. I agreed with Jade when she said, if she hated it or couldn’t take the cold, then she could move somewhere warmer. But the real tragedy would be to not go out of fear of really cold weather.

I was concerned about a lot of things. However reconnecting with my daughter after five months apart wasn’t one of them. We both find the name of a main Chicago thoroughfare, Wacker, hilarious. And the possibility of her working through the holidays makes us both weepy. We both loved walking the Chicago tree-lined streets; people watching, being a tourist in a great city and meeting new people. We loved telling our stories to others and making my sweetie listen to them over and over.

My baby girl is a tough broad. And I guess I am too, because I let her go. I’m beating my chest and giving her a thumbs up – telling her – YOU ROCK.

And another huge YOU ROCK to my sweetie, he made the trip possible for these two tough broads.

Berlin! How exciting (and far). I look forward to visiting again in the spring and summer. I'm going to skip this winter, but I'm sure I'll eventually have a Chicago winter experience.

It's so wonderful to see all the positives in the tough moves our grown children make. I had many of the same qualms you did when my daughter hauled her family (husband, 8-year-old child, and The Dog) to Berlin for a year. Winter was dark and cold, the language a bear but the experience was thrilling. I loved visiting them there (even the trip in February), sitting in a cafe have a kuchen with my daughter while we both opened our laptops and got to work. We can bemoan our losses when our children take on some daring vocational choice--or we can see the best in it and enjoy.

I love the tough broad concept! You two sound like you have a wonderful relationship. Best of luck to your daughter...she's living out what I wished I had done. I'm from MN, so I know all about the cold. One thing about the upper Midwest, we may have cold feet, but we have a warm heart. If she's a tough broad, she'll survive the Chicago winter.

Thanks Laurie. We do have a great relationship and I'm very proud of her. I was weepy putting up the Christmas tree without her, but she'll be home for 2 weeks at Mardi Gras.

Beautiful piece, Connie! I identify! Like the label of tough broad and am going to steal it. I'm home alone with my puggle in Baltimore while my daughter and her husband are in Seattle and my son is in California--all pursuing well-considered dreams. . A lot to let go, but then, that's what we raise them to do.

Yes Becky, our job as parents is to raise our babies to grow strong and independent. Sounds like you have done your job. I'm beating my chest, giving you a thumbs up and telling you, YOU ROCK!

Sugar cookies are the ultimate in sweet tooth satisfaction. Such a versatile cookie, too. If it’s crispy you’re looking for,...