Marie Hickman finally hit a “milestone” she’d been successfully avoiding for over 50 years. Read more from Marie on her blog. 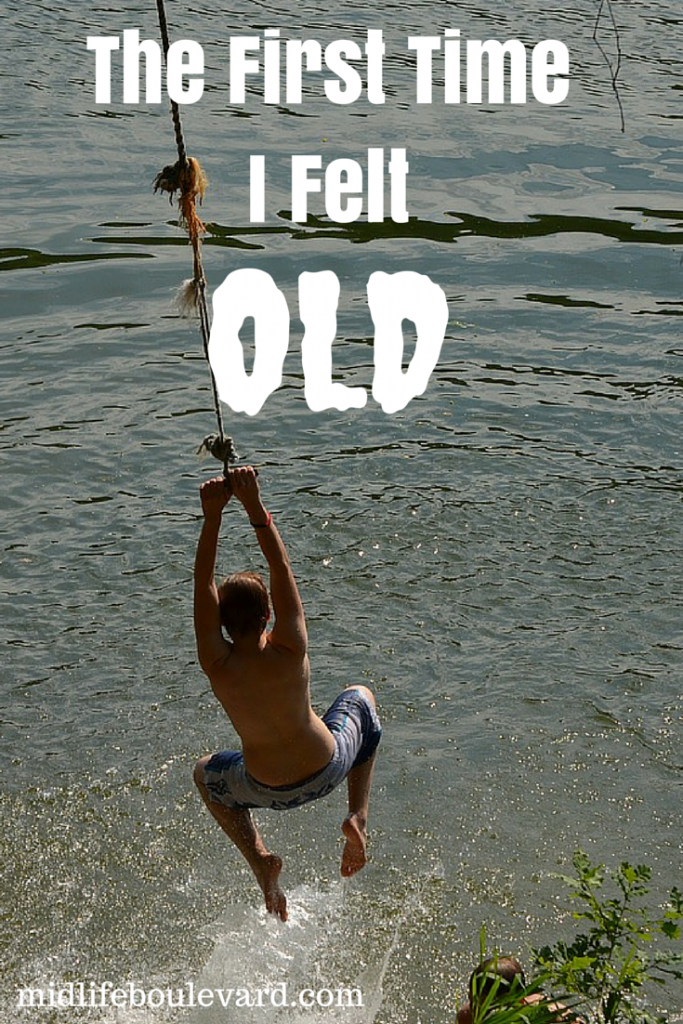 I have always been the kind of woman who plunges fearlessly ahead. Well into my 40s I journeyed to foreign countries alone. As the older mom of a younger child, I played a version of tag called Evil Grandma, slid down banisters, jumped off swings and climbed trees. I always climbed trees.

And then there was this one day, when I was 52, that I couldn’t do it anymore.

Friends and I took a small boat along the Weeki Watchee River in West Central Florida. Green, serene and primeval, it was the perfect antidote for stress. We motored slowly for a few hours, taking it all in, dodging low hanging cypress and palm branches in the narrow straits. Coming up to a bend, we heard squeals and laughter. We came upon groups of people anchored in a lagoon. Kids and teens were clustered on the far bank, standing by a tree. We stopped, anchored and stepped into waist deep water.

The kids were climbing an impossibly tall tree. Pieces of two-by-four had long ago been nailed into the trunk to serve as a ladder. We watched as they climbed to an upper branch, steadied themselves and plunged into a deep, blue pocket of the lagoon. Others formed a line on the bank beneath the tree and took turns swinging out into the water on an aging rope swing.

It was calling my 52-year-old name. Only I was my 13-year-old self, on a rope swing in my backyard.

We waded to the bank, which was slippery and muddy and thorny with exposed roots. While the kids and the younger man in our group clambered up easily, I found myself struggling. My upper body was much weaker than I remembered.

Feeling eyes on me, I grabbed hold of a root, stuck my foot on another and pumped whatever adrenaline I could spare into inching myself up. I saw myself spider-climbing up smoothly; instead, I slipped and scraped my stomach. I was half grateful and half mortified when a teenage boy pulled me up, dead weight.

It had to get better.

Finally, someone grabbed the guide at the bottom and flung the rope into my hands. I took a breath, adjusted my hands endlessly on the wet, twisted fibers and stepped backward. For a moment I was back in my teenage years, swinging confidently on the rope swing in my back yard, out over the woods. I had won at tag just last summer. I got this.

My friends’ children, unknown children, and a few adults cheered me on and clapped. Suddenly, I felt patronized, like one of those skydiving grannies you see at the end of a newscast. I’d show them.

I closed my eyes. My feet left the earth. I swung.

The gravity hit me hard. My arms were no longer the arms of a teenager. They burned as I hung on, straining against 20 extra pounds of midlife weight. I could only hold on a few seconds and dropped straight down like a lead sinker instead of gracefully arcing over the water.

There was more cheering as I surfaced.

Well, at least I made it. Swimming back toward the tree, I climbed up the banks a little more easily. Was it confidence? Strength? Pride? It didn’t matter. This time I was going to prove everyone, including myself, that I could laugh age in the face.

Instead of another go at the rope swing, I would climb the two-by-four ladder up the tree itself and jump off the top branch, just like the boys. Given the right footwear, I could climb trees pretty easily – well, I did a few months ago. Besides, I could rely more on my strong legs than my untoned arms. I could do this.

I grabbed the first wooden block, four feet up, and then realized the second one was far beyond my reach. There is no foothold, no way I could hoist myself up.

“Anyone want to give me a push?” I asked the group. This time, no one offered to help.

They must have known something I didn’t. Or they didn’t think I was serious. Or they knew I’d look like an ass, a middle aged woman trying to act 13. There’s nothing more pathetic than that, especially when you fail.

I didn’t press it. I eased myself down the bank and into the water, wading and swimming back to the boat. “Good job,” my boyfriend said, “but there’s no way you could have climbed that tree.” He started laughing.

He has always been supportive of everything I do with one exception: physical limitations. “You’re getting old, dear,” he would say affectionately. He didn’t have to say it now.

I realized on that day, bursting with greenness and youth and promise, that I had rounded a corner in the river. I could no longer think of myself as invincible.

Lately, at 55, I’ve noticed I don’t walk as fast as I used to. I drop things more frequently. I can’t turn on a dime. I get out of breath more easily. I even bow out of Evil Grandma tag.

Looking through pictures of that day on the river, I recently realized I can always be that 13-year-old in mind, if not body. In my mind, I am at the top of a tree, looking down.

Marie Hickman is a TV journalist turned writer and blog contributor. She writes about <a href="https://www.valpak.com">saving money</a> , parenting, cooking and travel. She admits her life is a mosaic, not a monument, and she is OK with that.

Marie Hickman is a TV journalist turned writer and blog contributor. She writes about saving money , parenting, cooking and travel. She admits her life is a mosaic, not a monument, and she is OK with that.

Thank you so kindly, Susan! You should have seen the actual photo from that day - yikes!

VERY, VERY well written, thank you. I just love your candor, and take away on this experience. Your point around the difference between what we can do physically and our lingering perception of our youth and spirit was uplifting. To me, it's a private little marriage and it's peaceful.

So many pieces about age revelations end with an Eeyore kind of "Well, okay. I had fun once. I guess that's over."

I also appreciated the message don't be an ass by exceeding your obvious limitations until someone tells you to dial it down.

Great point. With 50 being the new 30 in the media world, plastic surgery and anti-aging diets taking center stage, and women forever being held to a different aging standard from men, we may feel tricked into adopting a mindset that belies physical reality. Like they say: the mind is willing...

I would like to know where it is written that we should expect to be able to do everything at 53 like we did at 13. Could we do everything at 13 that we do at 53? Nope...so it's all relative and no sense in ever feeling bad at any age that you can't do something physically, mentally or anything in between!

Pennie Nichols found a way to lift herself out of a place where nothing was working. Actually, 5 ways. Read...