Skip to Content
0 shares
Airline Passengers! Is There a “Right to Recline?” 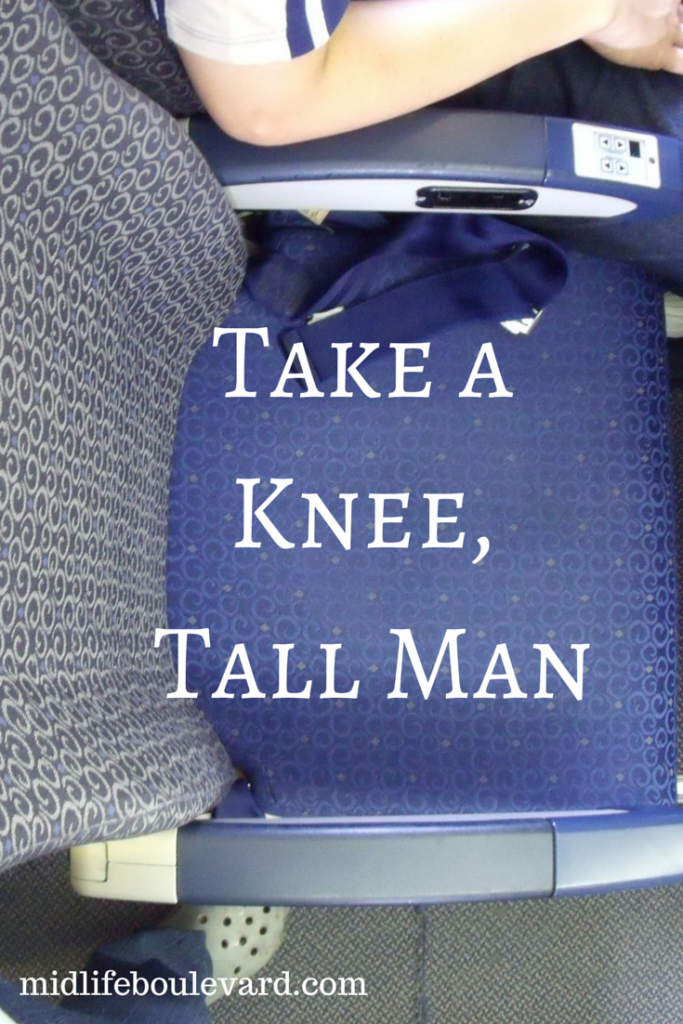 It’s called the Knee Defender. But I prefer to think of it as the Schmuck Identifier.  It was dreamed up by a tall man who was tired of getting his knees slammed whenever the person seated in front of him on an airplane reclined. So he designed a device that, when attached to your tray table, prevents the person in front of you from reclining. At all.
He didn’t just quietly go about protecting his own knees. He marketed the Knee Defender online.  Sales took off. And the in flight seat-related skirmishing began!
On a recent United Airlines flight, a traveler slapped one on his tray table after takeoff, to make sure he’d have sufficient space to use his laptop.  When the woman whose seat he was immobilizing asked him to remove it, he refused. She appealed to the flight attendants, who also told him to remove it.  He refused. Several times.
So she threw a glass of water at him.
The result? The pilot made an emergency landing, and both passengers were hauled off the plane.  I didn’t learn about this incident on the nightly news, but on a humor website.  Which is where it belongs. Because it‘s ridiculous.
Whatever happened to compromise? And communication? As we tell our children — “Share!” And if conflict develops? “Use your words.”
This is basic kindergarten stuff, people.
Flight is a miracle that too many people take for granted. If you could go back and tell someone who was around when the Wrights made their first flight, that 100 years later planes would routinely fly us across the country within hours, and that rather than feeling wonder and gratitude,  we’d squabble over whether our seats recline, she’d think we were insane.
I reclined my own seat on a recent flight from Philly to Chicago, intending to relax and read. Immediately, there was a tap on my shoulder.
“Uh… excuse me?” asked a male voice.
When I glanced at the fellow behind me, it was clear why he’d spoken up.
He was very tall. Basketball player tall. Circus performer tall! Folded into his itty bitty airline seat, knees up near his chin, he couldn’t have looked more miserable.
“Got it,” I said, and put my seat back up. I didn’t feel irate. Nor was I tempted to begin lobbing the pretzels I was snacking on at him. Mostly I felt very lucky to be just five feet 6 inches tall.
Flying with my seat in the full, upright position wasn’t as comfy as being able to lean back, but I was warmed by that sense of quiet satisfaction you get from knowing that you’ve done something nice for another person.
I’m grateful, in retrospect, that The Tall Man didn’t just jam a device into his tray table. That he relied, instead, on my understanding and civility.
He gave me the opportunity to do the right thing. And I did.
Sure, I’ll admit that when I read about that little flap at 30,000 feet, I wanted to cheer when I learned that the inconvenienced traveler had doused her  “oppressor.”   Too often, we polite, well-mannered people just sit and take it.
Was he a selfish schmuck? You bet! Did he richly deserve that little airplane shower? Hell, yes! But the truth remains that neither of these folks behaved like grown ups.
Being a grown-up — rather than a toddler —  means recognizing that world doesn’t revolve around you. All your needs won’t always be met. The needs of others matter too. And if your needs are in conflict? You communicate. You work things out. And if you can’t?
Don‘t start throwing stuff.
Instead, ask the flight attendant – nicely — for a bloody Mary. Sit back, enjoy your drink, gaze out the window at the big puffy clouds and thank God for the wonder that is 21st century aviation.   (And if you want to indulge in a little fantasy about the airline mangling another traveler’s luggage? There’s no harm in that.) Soon the pilot will get you safely to your destination.
After which, you’ll never have to set eyes on that schmuck  in the seat behind you again.
Roz Warren is the author of OUR BODIES, OUR SHELVES: A COLLECTION OF LIBRARY HUMOR. . This essay first appeared on www.zestnow.com.

I hear you on being squished. I think the problem really comes down to the airlines trying to squeeze everyone on a flight like sardines. They keep adding more seats and no one over 100 lbs fits in a seat comfortably. It would seem that would add to the weight on the flight as well making it less safe. I long for the days of Pan Am in the 60's where you actually had room to move without the danger of a pulmonary embolism. I wonder what Sully Sullenberger thinks about all this. LOL

August is the month when empty nesting becomes a reality for many parents. Connie McLeod is one of them. Read...