These swimming pigs are causing a sensation, and it is easy to see why!  PIGS are not supposed to be swimming in the ocean…are they?  Have YOU ever seen such a thing?  Or heard about it?  A couple of months ago I saw a video on Youtube with the swimming pigs of the Exumas, and I was so amazed (and laughing so hard) I decided I had to come and see this for myself!  It must have been meant to be, because a few weeks later I had the opportunity to travel to the Great Exumas (outer islands of the Bahamas).  I checked to see where these swimming pigs were, and when I found out they were in the Exumas, I booked my ticket! 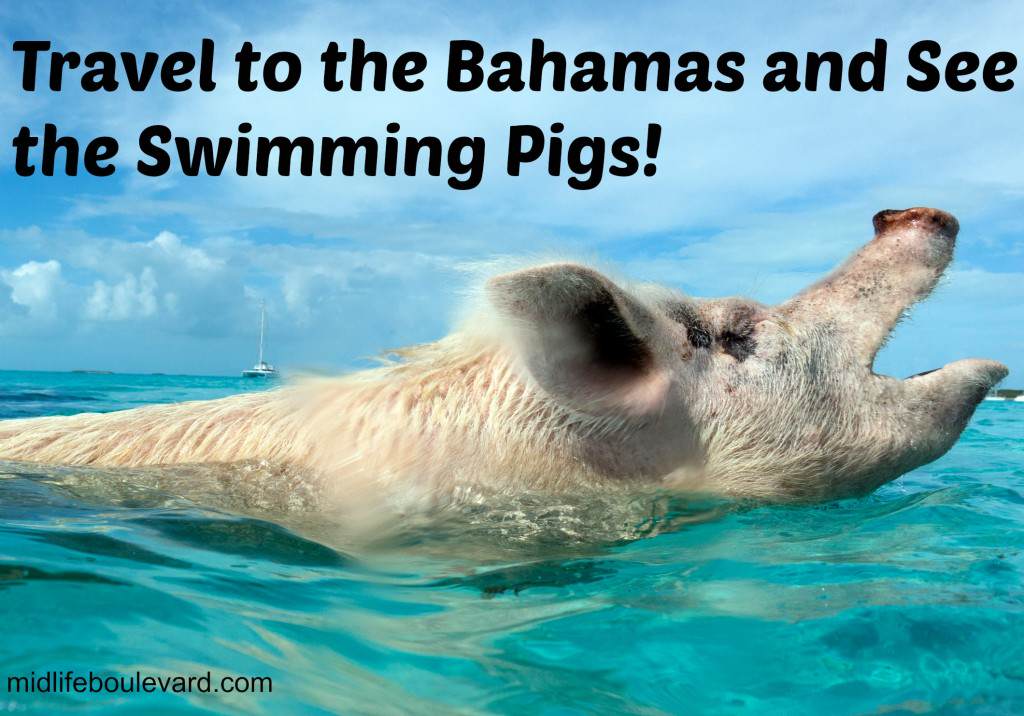 On arrival, I asked how I could get to the pigs.  It turns out there are unbelievable animal encounters here in the Exumas!  On Stocking Cay you can feed conch to the stingrays. I booked with Exuma Water Sports, not just to see the pigs, but to see huge iguanas (and feed them!), swim with nurse sharks, and snorkel Thunderball Grotto (where 007 movies Thunderball and Never say Never were filmed).  There are over 300 cays (pronounced keys), which are small islands, throughout the Exumas.  The only way to really check it out is to do it by boat.

This led to Exuma Water Sports, owned by Ray and Phillipa Lightbourn. The Lightbourn family has been in the Bahamas since 1735, and it doesn’t appear that they plan to go anywhere!  Be glad, because their tours are top notch.  I went the first day for a full day tour on board the 007 by myself as my cousin, who planned to go with me, was ill. What an incredible day!  Great people – it was lovely to chat with Ray and his son, Justin, and the highlights were amazing. The swimming pigs are just….hilarious. Seeing them swimming starts the laughter, it is so incongruous!

As I understand it, one of the cays had a pig farm on it, and the pig farmer was not only tired of farming, but tired of complaints about the odor of his pig farm.  I cannot remember if he just turned them loose, or if he relocated them (I think the latter because they seem to have their own island), but when boats would stop to look at them, they began to swim out to the boats for food!  And so, the swimming pigs of Exuma were born.

Exuma Water Sports takes you to see the pigs on their full day tour, but they are too far for half day tours.  So what did they do?  They brought their own pigs to a small cay and taught them to swim and come for food!  They are now a year and a half old, and cute as they can be.  I was lucky enough to see both sets of piggies, I loved the full tour so much, I took my cousin back for the half day tour!

I am rather accident prone, and Exuma Water Sports helped me stay on my feet instead of tripping around the boat. They figured out the first day that falling on flat surfaces seems to be quite natural for me…though I did fall off the boat ladder once, too.  Just call me Grace.

Swimming pigs need to be on your list, folks!  Want to see them in action?  Check them out on YouTube!  And tell Exuma Water Sports Tam sent you!

Read more from Tam Warner Minton on her blog, Travels with Tam

That's what vacations and travel should be: interesting!

Midlife Boulevard, you made my morning! Just seeing these pigs makes me laugh and makes me happy! Thank you!

Thank you, Tam - such an interesting vacation!