If you had a grandmother, you’ll love this story from Kate Campbell. Read more from Kate on her blog.

Before falling asleep, we’d hold hands with the twin beds pushed together, blankets mounded in the divide. Across that narrow separation, my grandmother told stories of when she was young, about times when she taught school in logging towns in British Columbia and lots of other things, like playing honky tonk music and running a corner store on San Francisco’s 17th Street hill.

These tales from the turn of the century come to mind now for several reasons – I’ve been reading Canadian writer and Nobel Laureate Alice Munro’s Selected Stories and find in them echoes of the stories my grandmother told. And, for reasons I can’t explain, this summer I’ve been going through boxes of family photos handed down to me, mostly without names or notes. 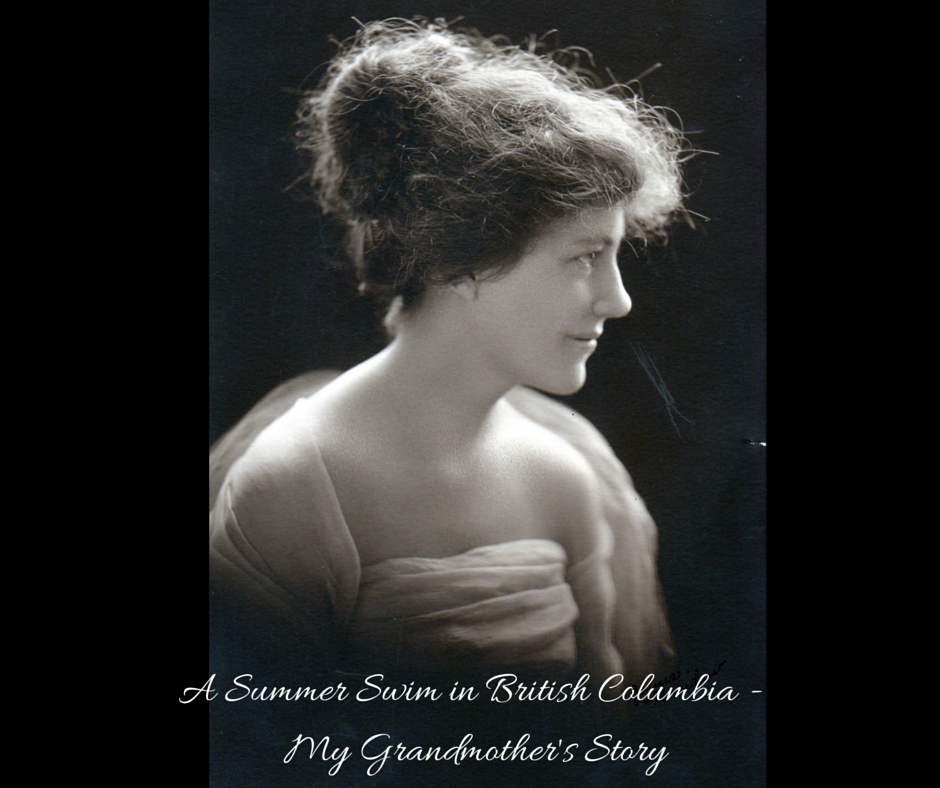 I find myself remembering and wondering, making up stories from the slender recollections of my grandmother. Looking at her driving her car and standing in the doorway of her school house brings back tales of long ago.

This story, told at bedtime in my grandmother’s dark, dusty room, with the smell of face powder and perfume in crystal jars with fancy stoppers, begins something like this:

“It was a beautiful day. British Columbia was beautiful back then, with trees and mountains and rivers.”

“About 1915, but don’t interrupt or I won’t tell the story . . . It was a Sunday and school was about to start in the fall. I taught the children in one room, in a log cabin, all of them together. The rules for teachers were strict. They wanted you to dress and talk a certain way.”

“Where did you live?”

“In a house they provided, of course, and I drove a car, which they didn’t like, because most people didn’t think women should drive. But, I did it anyway. Do you want to hear this story or not?” 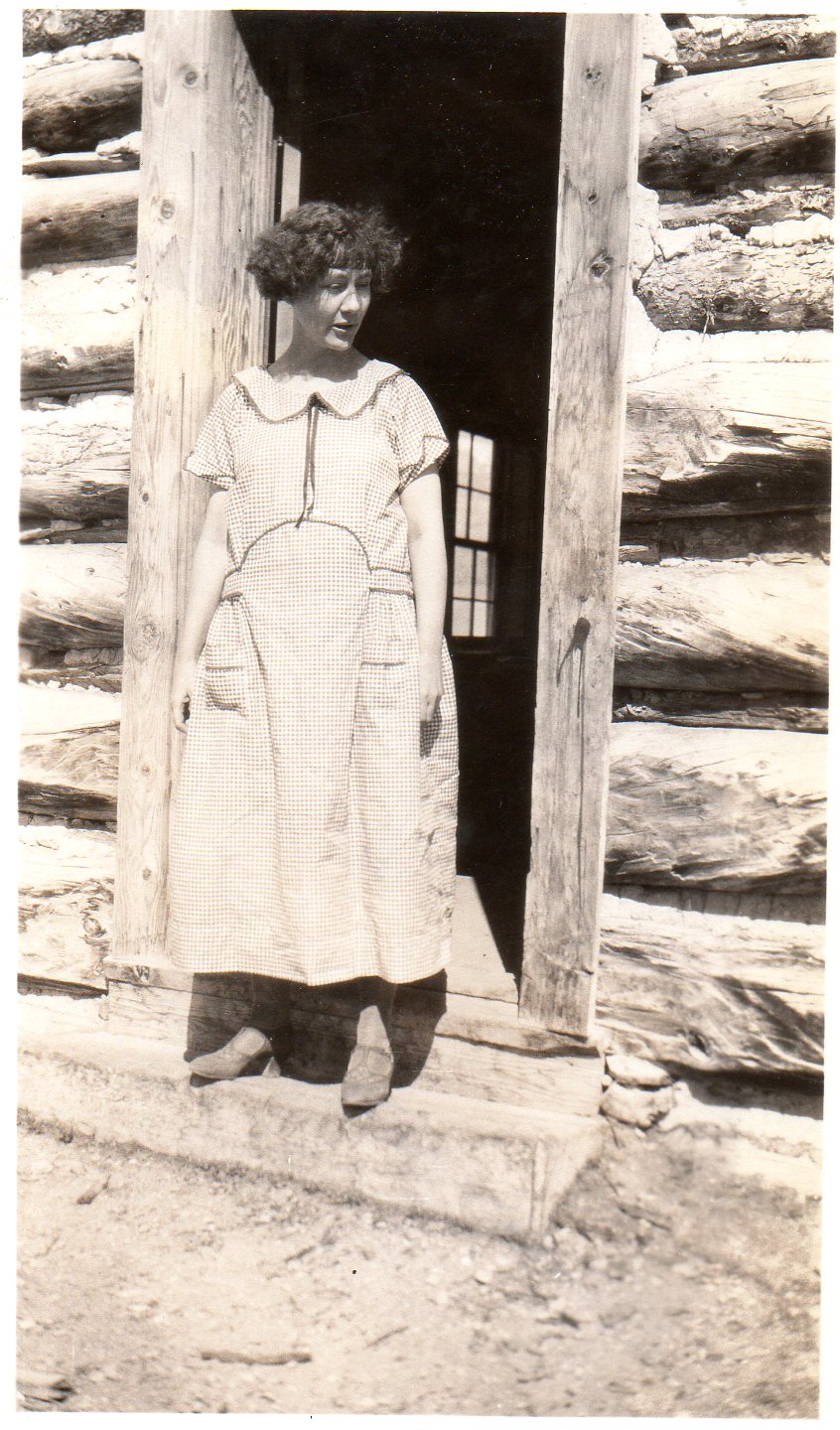 My grandmother as a young woman

“I want to hear,” I said, pulling my hand free. The angle of our holding made my wrist ache.

“I went on a walk by the river at the end of summer and then decided to swim. I was near the chute they used to send logs down to the river, by where they gathered them up in big rafts. Then they’d float them downstream to the mill. I didn’t expect the men would be working on Sunday, thought I would be alone. But, I heard a rumbling and saw big logs coming down. They splashed and bucked through the water, straight for me.

“I knew I’d be killed so I ducked under water and swam as hard as I could. The sound of the logs hitting the river carried under water and made me swim faster. When I came up for air, I was far out in the river and the current had caught me. I was carried into the log jam. I grabbed hold of the logs and pulled myself around, swimming with them until I got myself close to the bank downstream. I swam to it and had a long walk back to my clothes, but I lived through it.”

“I’m glad, too. But I learned why they say you shouldn’t ever swim by yourself because you don’t know what might happen. Now, give me back your precious little hand, tell me you won’t swim alone.” 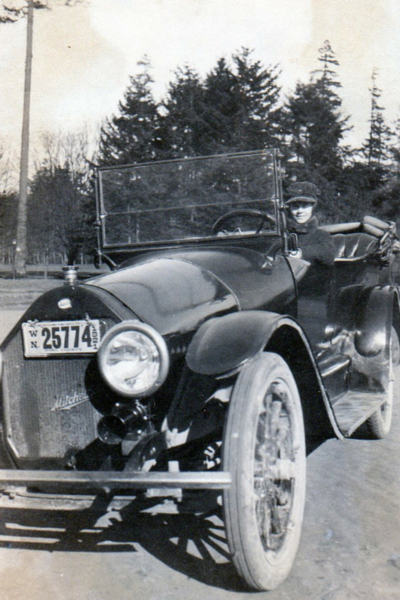 My Grandmother, Dessalyn Matti King Wilson, was born in 1890 and graduated from the University of Missouri with a degree in physics in 1910. She was 20 when she graduated and there were no jobs for women in the field of physics in those days.

So she went to teacher school, Chillicothe Normal School, and by 1915 was teaching in one-room school houses in logging towns in British Columbia. She said she did it for the fun, which I took to mean the adventure of being a pioneer.

She liked girls who “stood up for themselves,” she said. She was an accomplished seamstress and made all her own clothes and ours until I went to junior high school and rebelled, because no one wore cotton dresses with big collars and crinoline petticoats in the early 60s.

She wasn’t hurt by my decision. She took me shopping in downtown San Francisco, insisting on white gloves, patent leather shoes and ankle socks. She called the sales ladies “Petty,” and insisted they go into the stock room and bring out the best “goods.”

Midlife is a time for taking stock, for going through transitions, for clearing clutter and getting down to the best stuff about life and us. Going through old family photos, following faded images back to our beginnings, back to bittersweet memories of who we are, we figure out what to hang onto and what to let go. And, we recall where the wisdom we pass on to children and grandchildren came from, wisdom about things like swimming alone—in British Columbia—things we hope will save their lives like they did ours.

In addition to writing fiction and poetry, Kate Campbell is an environmental and political writer. Her work appears regularly in newspapers and magazines throughout the West. She lives in Sacramento and publishes the <a />Word Garden blog</a>.

In addition to writing fiction and poetry, Kate Campbell is an environmental and political writer. Her work appears regularly in newspapers and magazines throughout the West. She lives in Sacramento and publishes the Word Garden blog.

(Please note: some links are affiliate links) “I would send you a bouquet of newly sharpened pencils.”  Remember that great...