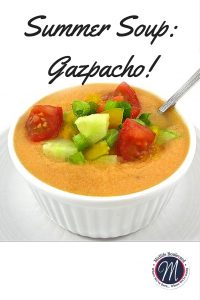 Pin to a soup or summer recipe Pinterest board!

Nancy Fox brings delightfully tasteful and skinny recipes straight to you at SkinnyKitchen.com. This recipe for gazpacho was originally featured there.

When you’re in the mood for soup but it’s just too hot to go with your standard favorites, gazpacho is the perfect solution. Gazpacho is a light and refreshing soup from Spain.

There are so many ways to make gazpacho. It’s said that if you had thirty Spanish cooks in the kitchen, there would be thirty different versions! I’m using a quick step of sautéing the garlic first in olive oil before adding to the blender of veggies. This really enhances the fresh garlic flavor.

In addition, I’m serving it with a medley of chopped vegetables for garnish. You might be wondering why this gazpacho’s a blush color instead of a vivid red. It’s due to using yellow sweet peppers, which soften the color.

With just 101 calories a cup, 2.5 grams of fat and 3 Weight Watchers POINTS PLUS, this soup is a delicious and simple way to eat a ton of veggies in one fell swoop!

½ teaspoon salt, or to taste

Several drops of Tabasco, to taste

3. In batches, puree mixture in the blender until very smooth. Pour into a large bowl.

4. Season with salt, pepper and Tabasco to taste.

5. Place in refrigerator and chill for at least 1 hour or overnight.

6. Chop topping vegetables and store in refrigerator until ready to serve.

7. To serve ladle each serving into a small bowl. Top each with the variety of chopped vegetables. Or, bring all the veggies to the table, and let everybody top their own.

Dating back to 1824, in an old cookbook called The Virginia Housewife; Mary Randolph included a recipe for gazpacho. Her recipe was probably the first gazpacho recipe published in America.

Yellow peppers are an excellent source of vitamin C and contain a fair amount of vitamin A and calcium.

Cucumbers are over 90% water. They contain a significant amount of vitamin C and potassium.

Tomatoes are extremely rich in antioxidants especially Lycopene as well as vitamins A, C, and K.

Scallions contain a significant amount of vitamin C and some B6.

FAT FACTS: The skinny and fat facts are the same for this recipe!

This looks great and will make a perfect meal to add to a hot summer dinner plan rotation. Thanks!

Cool off with this easy, yummy soup. Thanks for sharing it ladies! Have a wonderful weekend, Nancy

My Life Is A History Lesson

Meryl Baer can be found writing about whatever she wants - from travel to food to friends and relatives -...