Updated May 2018: If you love Downton Abbey, you want to watch other shows with a similar feel. Especially since we’ll never get new episodes. I want my entertainment set in European, in a corset and getting its news via telegram.

Can’t get enough quality costume drama portraying the late-19th and early-20th century in Europe? Here’s another round of shows to watch like Downton Abbey.

Want to own all six seasons? Buy the boxed set of Downton Abbey through our affiliate link.

Set in 1870s northeast England, The Paradise tells the story of country girl Denise Lovett.  Denise takes a job at England’s first department store (lit inside with candles!). She becomes involved in the dramas of the store’s employees, owners, and customers. 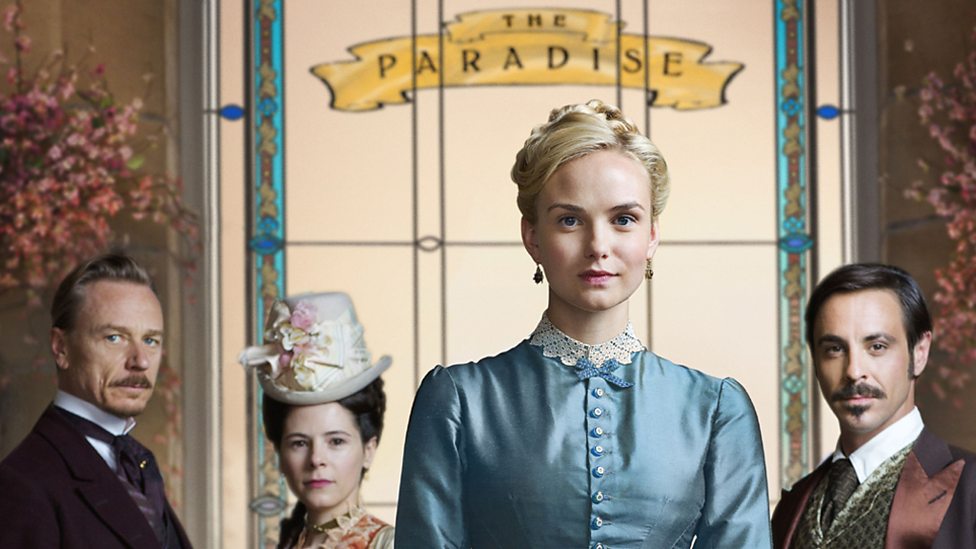 You may recognize the character Lord Glendenning, played by Patrick Malahide, in each Paradise episode. He also is on Game of Thrones as Baylon Greyjoy.

There are two seasons with sixteen total episodes of The Paradise available to stream (or via dvd) from Netflix.

Anne With an E

Based on the book Anne of Green Gables by author Lucy Maud Montgomery, this new miniseries is from 2017, not the one from the 80s.

This gentle, domestic drama follows the red-headed orphan, Anne Shirley, as she grows up on Prince Edward Island, Canada.

The original novel sold more than 50 million copies and is the most popular Canadian novel ever.

Set in 1912 Germany, a young man, Richard Madden (Game of Thrones, Cinderella), takes a position as a clerk to a rich, German man, Alan Rickman. Promoted to private secretary in the ill, older man’s home, he falls in love with the his employer’s beautiful young wife, Rebecca Hall.

Though they never act on their love, when the young man is sent away to supervise business in Mexico, a promise for possible future love is delayed by World War One. 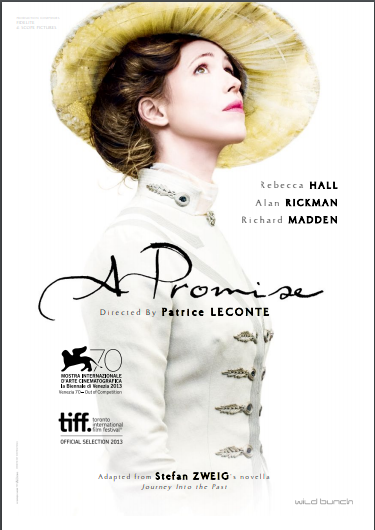 A pair of unconventional sisters befriend an upper class family. When the rich mother of the family dies and wishes to leave the older sister her family cottage, Howards End, her husband and children intervene.

After the relationships change, will that decision come back to ruin happiness?

Of course, you already watch this. Set thirty years after Downton, the nuns and young nurses of Nonnatus House care for the women’s health needs in the East End of London. I like to think of the young women as what the children of Downton Abbey’s residents and staff will be like after World War II. Maybe one of the old nuns is Lady Edith. It could happen!

Six seasons are available on Netflix through streaming or dvd.

Miss Phryne Fisher is a progressive flapper in the 1920’s who returns from time abroad to Melbourne, Australia, to solve crime. I watch Miss Fisher’s Murder Mysteries just for the costumes alone! Netflix currently has three seasons available to stream.

I love that lead actress Essie Davis is a woman in her prime who lives live on her own terms. It’s a very different character from what she played in the horror movie The Babadook.

Back to Downton Abbey

Downton Abbey broadcast six seasons of the BBC show on PBS in the United States. Add it to your Netflix queue or buy the boxed set on Amazon.

Need more British costume drama goodness? Check out seventeen things to watch on Netflix if you like The Crown.

Currently not on Netflix, but you might find elsewhere:

This epic tale of Victorian love among the privileged but new-moneyed Forsyte family was broadcast on PBS in the early 2000s. It’s based on a series of novels written in the early 20th century by Nobel-prize-winning English author John Galsworthy, and was first filmed as a series in the late 1960s.

I love the modern version of The Forsyte Saga for the anti-hero performance of Damian Lewis (Brody on Homeland.) Is he a beast to Irene, or is he the saddest, most lonely man ever, desperate for “the beauty and the loving in the world,” but without the personality and warmth to attract it? 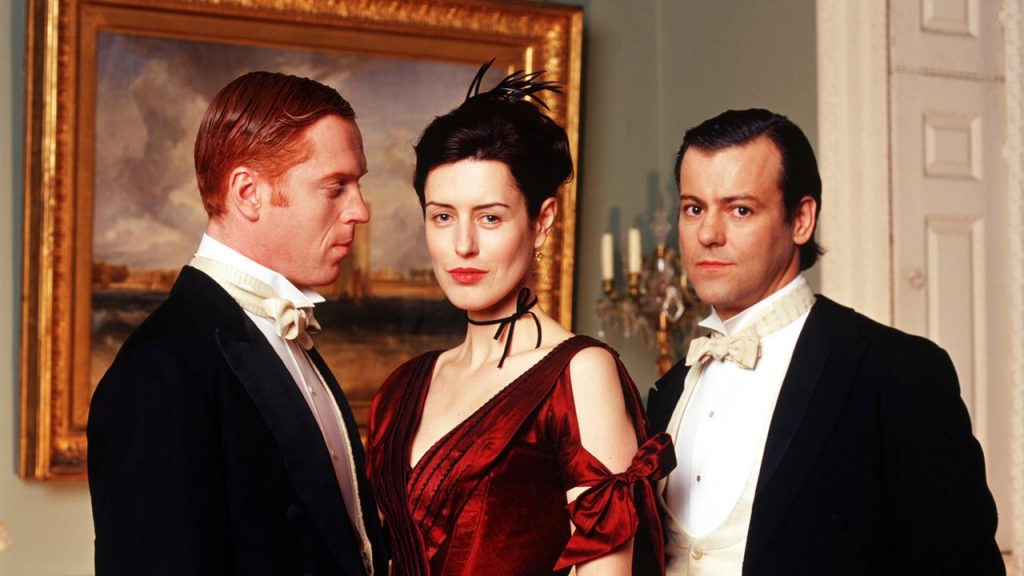 There are two seasons of The Forsyte Saga available on Netflix, for a total of ten episodes of the contemporary series. All 670 minutes of the original black-and-white version are also available, though only via dvd. While it was a phenomenon when first broadcast, the original version didn’t grab my attention like the new production.

The Germans invaded The English Jersey Islands during World War II, which made it the only English territory to live under occupation during the conflict.

The six episodes of Island at War deal with life under the duress on a fictionalized version of Jersey and Guernsey. Real life events are the basis for this series. Many are similar to some of the plot lines in the novel The Guernsey Literary and Potato Peel Pie Society.

You’ll recognize Downton’s Anna Bates, actress Joanne Froggatt, as one of the female leads in Island at War. Sadly, this didn’t get a second season, so you will be left hanging on some plot points, but I think it’s worth your time.

Currently Island at War is only available on Netflix through DVD.

You may already know something about the code-breakers of Bletchley Circle from movies like Enigma and The Imitation Game. The Bletchley Circle is the story of the women cryptographers and their lives almost a decade later. Now they are librarians, office girls, and mothers who can never speak of their jobs during the war–not even to their husbands or parents.

When a serial killer is on the prowl in London, the women band together and use their skills in problem solving and logic to see the patterns the police miss.

I loved this ensemble cast lead by Anna Maxwell Martin, who played Esther Summerson in Bleak House.  Netflix has all seven episodes from the two seasons produced.

I’m sad they won’t make more of this. It’s an extraordinary picture of women’s lives after the war.  There are secrets, food rationing, and life that has become almost painfully ordinary. 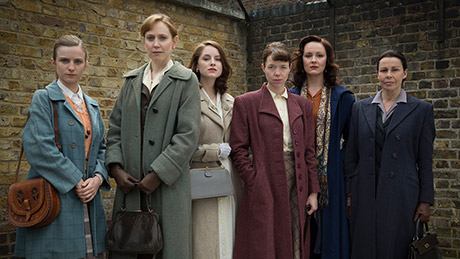 I agree with all of you, the paradise, gran hotel etc. are all very good. But ladies, you have to watch 'Velvet'. I can't stop watching!

Doc Martin is a great show!

Just finished putting together this list of period dramas on NETFLIX in 2016, which may be of interest too: http://www.willowandthatch.com/period-costume-historical-dramas-netflix-2016/

Thanks Annie! Here is a list of over 100 period dramas with the Downton Abbey cast, many of which are on Netflix. http://www.willowandthatch.com/costume-dramas-like-downton-abbey/