I am in Pine Bluff, my hometown.  Visiting for the weekend.  The last time I actually laid eyes on either of my brothers or their wives was several months ago, very briefly, at my sister-in-law’s mother’s funeral.  Literally a couple of hours.  Before that?  Last December. 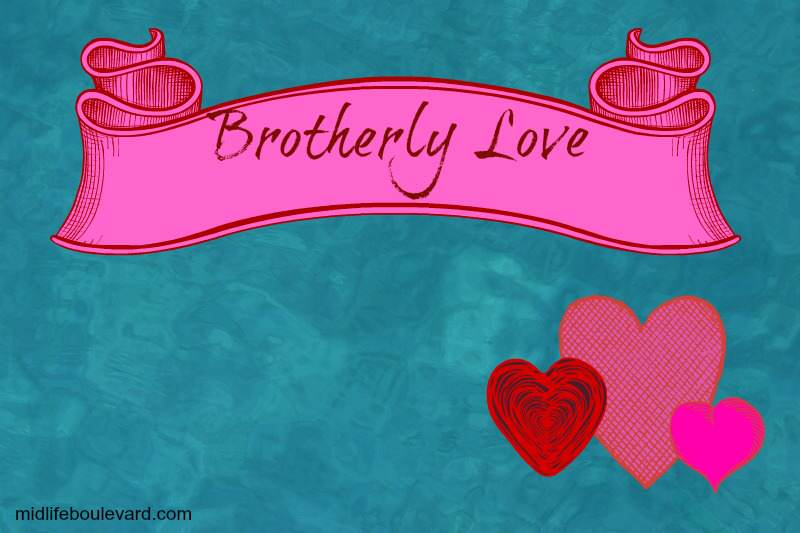 I have two brothers.  Adam and Spencer.  I am “the baby”.  All three of us have fairly dominant personalities.  I should probably take out the word “fairly”.

We went to a fundraiser for the local symphony last night, where I saw many people, some known for years.  My well-loved brother Adam was the MC, a role he is asked to perform frequently.  His voice sounds like Charlton Heston as Moses parting the seas.  Commands attention.  My oldest cousin Bill is the director of the symphony, so he and his wife Cheryl had worked hard to make the night a success.  I loved hearing all the nitty gritty.

Food was really good.  A bit spicy for my taste but I am a wuss when it comes to spicy.  I saw others reaching for the Tabasco.

Spencer and his wife were busy last night but we are all getting together tonight.  It will be loads of fun.

I am very lucky.

Siblings – brothers and sisters – can be the longest relationship you have in your life.    The memories we share, the kind of caring I have for them and they for me,  the perspective each of them offers to my life – it’s invaluable.

Our dad struggled with various illnesses during his lifetime.  I remember more than once, he talked about his potential death.   Not in a macabre way.  Just out of love.  He would gather the three of us together.  Remind us of just how important we were to each other.  To never let anything get in the way of that loyalty and affection.

I am even more aware of these bonds at the age and situation I find myself now.   We are evolving into the oldest generation within our own families.

That feels odd but obviously natural.

I feel even more of a connection.

I have some sadness that my own son, an only child, will not have this same kind of support.

But I know you can have something similar with old friends.  I have a plaque in my office that reads, “Friends are your family of choice”.  So true for so many.

Last night, brother Adam and I stayed up and solved the problems of the world until way too late.  I will check in tonight with brother Spencer.  See if he agrees with our solutions.

I doubt that he will.   That will make it all the more fun.

Read more from Margaret Rutherford, PhD on her blog, Nestache

I grew up sleeping two feet away from my sister Gina and, let me tell you, she is the only person in the world with whom I've had all out physical brawls. There was the time my poor young aunt and uncle (early 20s) were babysitting us and something riled each of us up. When my aunt and uncle came to our room to see what all that yelling was about my sister had her foot on my head and was trying to pull out a hunk of my hair and I was wrapped around her legs gouging them with my fingernails. I think we were 7 and 8. Guess what? She's one of my closest friends in the world today. (But she still scares the crap out of me.)

So true. My brother and I didn't get along when we were growing up (we're 4 years apart and quite different), but we are very close now. It is nice to have a shared history (and to roll our eyes in unison at our aging parents)!

My kids are about the same age span, and don't get along well - they're 16 and 13 - but I am hopeful that when they are adults they will become close like my brother and I did.

This was a very nice piece. I really enjoyed it.

Thank you Charlene. Especially my oldest brother and I were at each other's throats when we were growing up! I was sadly enough a tattle tale and he was just mean at times. We are much better now! So glad you enjoyed it! And that your sibling relationships are as meaningful as mine.

As fraught as sibling relationships can be, they are likely to be our main life-long relationships. And as much as I miss my older relatives who have passed, the loss of my brother is still a frequent ache.

Anne, I can only imagine what that feels like. I hope that your healing continues. I guess if it aches that much, that it was a fulfilling and genuine relationship. One of the hard things about caring a lot. Thank you for opening your heart and commenting.

The Story of the Blue Lights

Once upon a time, in a neighborhood not far from yours, lived a beautiful, blonde-haired, blue-eyed little girl who loved...