One night I was having a small pity party over something I no longer remember, and I told Hubs he didn’t seem to love me as much as he used to. He did the appropriate hubby thing and gave me a hug, repeating how much he loved and how lucky he was, blah, blah, blah, but I sensed a certain sigh in his voice and I challenged him on it. 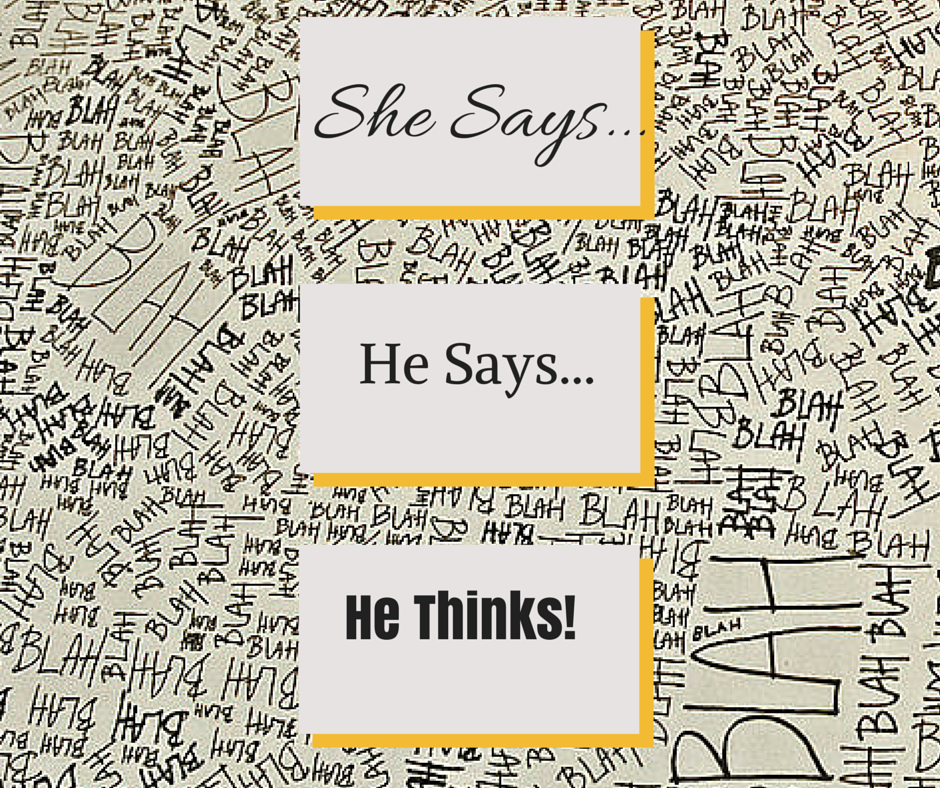 “Fine,” he said, and rolled his eyes, “I was thinking Are you nuts?? I just spent a week painting the entire inside of our house pink because that’s what you wanted. Pink. I sure as hell didn’t pick it. If I wasn’t crazy about you, it would have been painted a normalcolor, like beige, which I won’t have to completely redo when we sell the house.”

Notwithstanding that it wasn’t pink, it was salmon, he had a point.

I began to think about the vast sea of articles written about the centuries old lament from men that women have some weird language that they’ll never understand and how exhausting is was constantly trying to figure out what we’re thinking. But let’s get real here. We don’t always know what ‘s really behind your responses either. A quick, and hilarious, survey among married friends resulted in the following exchanges and what men are really thinking when we’re talking.

She says: “You never listen to me anymore.”
He says: “I’m sorry. Let me put down the remote and give you my full attention.”
He’s thinking: “Seriously, babe?? All I do is listen, because you’re always talking.

She says: “You don’t love me as much as you used to.”
He says: “Of course I do. I love you as much today as I did the day we got married.”
He’s thinking: “For the love of God, woman, I just walked your stupid toy poodle, Lola, past my gym while she was wearing her tiny mink jacket. Now I have to drive across town to work out. What do you want from me??”

She says: “Can we talk?”
He says: “Of course. Let me get some wine and I’m all yours.”
He’s thinking: “Oh, crap. No female has ever begun a sentence with that as a segue to ‘We just won the lottery and we need to figure out what to do with the 358 million dollars.’ Ever. Whatever it is, it’s bad.”

She says: “My old boyfriend just got promoted to Regional Director at Microsoft.”
He says: “Good for him.”
He’s thinking: “Great. She’s probably wishing she would’ve married him. I’ll never make that kind of money and she knows it. Her mother is right. I’m a loser.”

She says: “It was such a long day at work. Why don’t you pour us some wine and get comfy while I change.”
He says: “Sure, sweetie. Maybe a bubble bath would help? Oh, and your sister called.”
He’s thinking: “If I can get her sidetracked, maybe I can avoid the play-by-play of her eight-hour day with a bunch of people I don’t know and don’t give a crap about.”

She says: “Guess what today is?”
He says: “I don’t have to guess, honey. I was just considering where we should go to celebrate.”
He’s thinking: “I’m so dead. If I guess and I’m wrong, I’m screwed. If I tell her I don’t have a clue, I’m forever the douche husband that forgot the date we first kissed, or danced together, or, oh God, what else do we celebrate? Somebody help me. Anybody??”

She says: “It was on sale!”
He says: “Great! And you’re right, it looks expensive.”
He’s thinking: “It looks expensive because it is. And the last time you brought home something ‘on sale,’ it was those  black boots that you got for $400 instead of $600. Asale is 3 for $10, free shipping. You have no credibility anymore, woman.”

She says: “Let’s just call your brother to fix it.”
He says: “It’s just some plumbing. No worries. I got this.”
He’s thinking: “She obviously believes I have no freakin’ clue how to fix anything around the house, so let’s just call my brother, who, by the way, isn’t a plumber either, but sincehe fixed their toilet, he’s the man. Bite me, bro.”

She says: “I’m okay. Don’t worry about it.”
He says: “Come here so I can give you a hug. If there’s anything else I can do, just let me know.”
He’s thinking: “Okay, jackass, what did you do that made her cry? She’s really upset, and you know it’s your fault. Think, man. Think. What did you do??”

She says: “Our sex life is fine.”
He says: “Okay. That’s good.”
He’s thinking: “Fine? Fine?? I once told her she looked’ fine,’ and she burst into tears. But it’s good enough to describe our sex life? So our sex life sucks. I suck at sex. Her Microsoft boyfriend was probably great in bed, even though he’s an arrogant tool.”

So here’s my idea for a new board game called “What She Said, What He Said, What He Thinks.” Two or more couples, to make it more fun. The woman draws a card of common female statements and reads the phrase to her partner. He responds in his usual manner, and she has 10 seconds to figure out what he’s really thinking.

You are SO going to be rich.

I was laughing through all your examples. Mainly because I think I am a little more "He" than I'd like to think.

Thanks, Angie! It was a fun post to write. Glad you enjoyed it!

This is SOOOOO funny and right on the money, too! Love your sense of humor! Or maybe it's your insight.... : )

Becoming An On Call Parent

Parenting never ends, as Laurie WJN has learned from her new position as the "on call" parent. Read more from...