After nearly a year of planning, discussing, and researching, my husband and I were ready to go. It’s our 25th anniversary this year, and this trip to Italy would be the first time we had ever been away together for more than 5 days. Why? Well, raising kids, owning a business, financial considerations and more had kept us from taking the time to leave  home for 2 weeks as we were finally able to do to celebrate this monumental occasion…25 years!

Two days before our trip, our Lufthansa flight was cancelled, due to a strike.  Not to panic, though! My husband’s mother came to our rescue with United Airlines miles and we were able to fly out as planned. For a few hours there, we thought our trip was going to be ruined, but thankfully it wasn’t.

Now for the good stuff!

After a long journey (14 hours of flying, 2 hours on a train), we arrived in Florence – exhausted but thrilled. Florence is a city of beauty and style, filled with narrow, pretty cobblestone streets, ridiculously chic and gorgeous people, and history everywhere you turn (though that’s true of Italy in general). After checking into our hotel, we wandered out to find a pizza place I had read about in Rick Steves’ Italy guidebook.

Public Service Announcement:  Rick Steves’ book was my bible for this trip, and he did not once steer me wrong. If you’re planning a trip just about any place in the world, check out Rick Steves’ guidebooks.

The pizza was amazing. 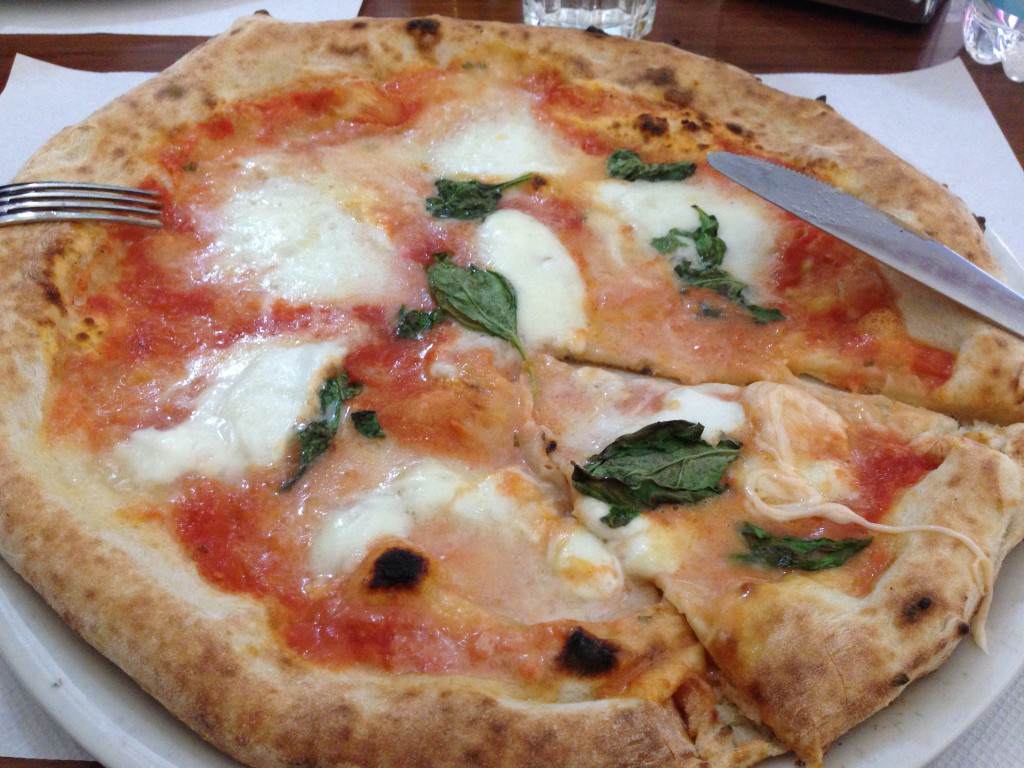 As was the gelato afterwards. 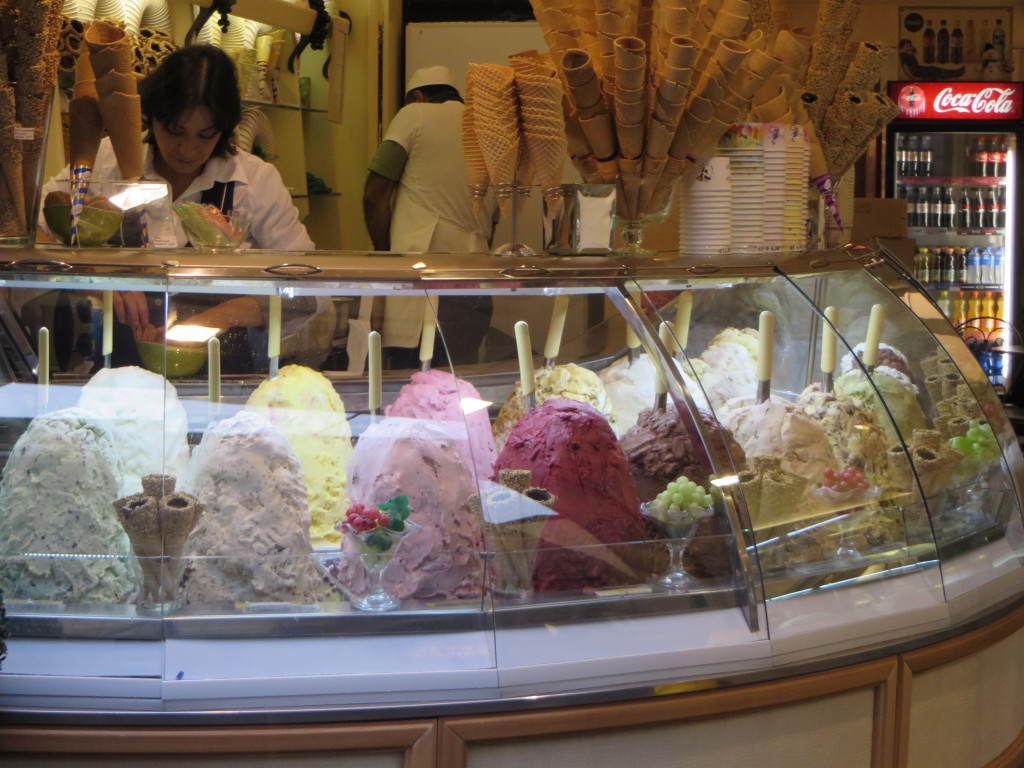 We stumbled back to the hotel, our tummies full and our bodies ready for sleep. 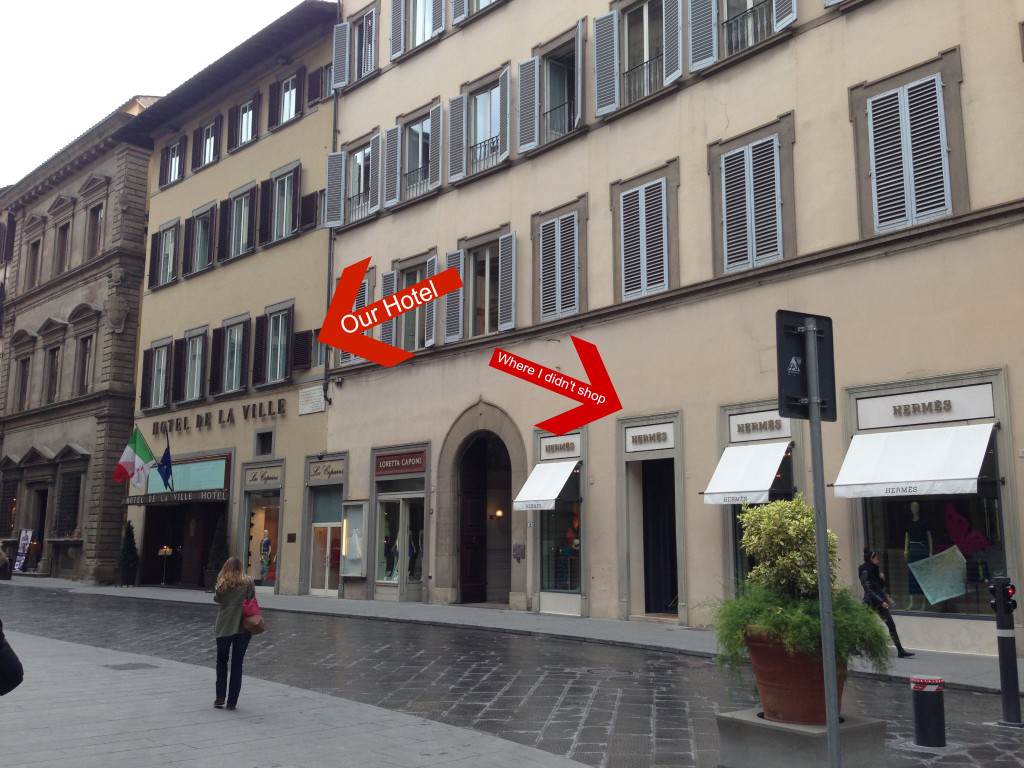 The next day – our only full day in Florence – we hit the can’t-miss spots. Despite a rainy morning, we were enchanted by the colors, the people, those cobblestone streets (though they’re not easy to walk on), the atmosphere. We headed over to the Ponte Vecchio to do some window-shopping – gold, silver, gemstones – before our pre-scheduled (and you MUST pre-schedule) entry at the Uffizi Gallery. 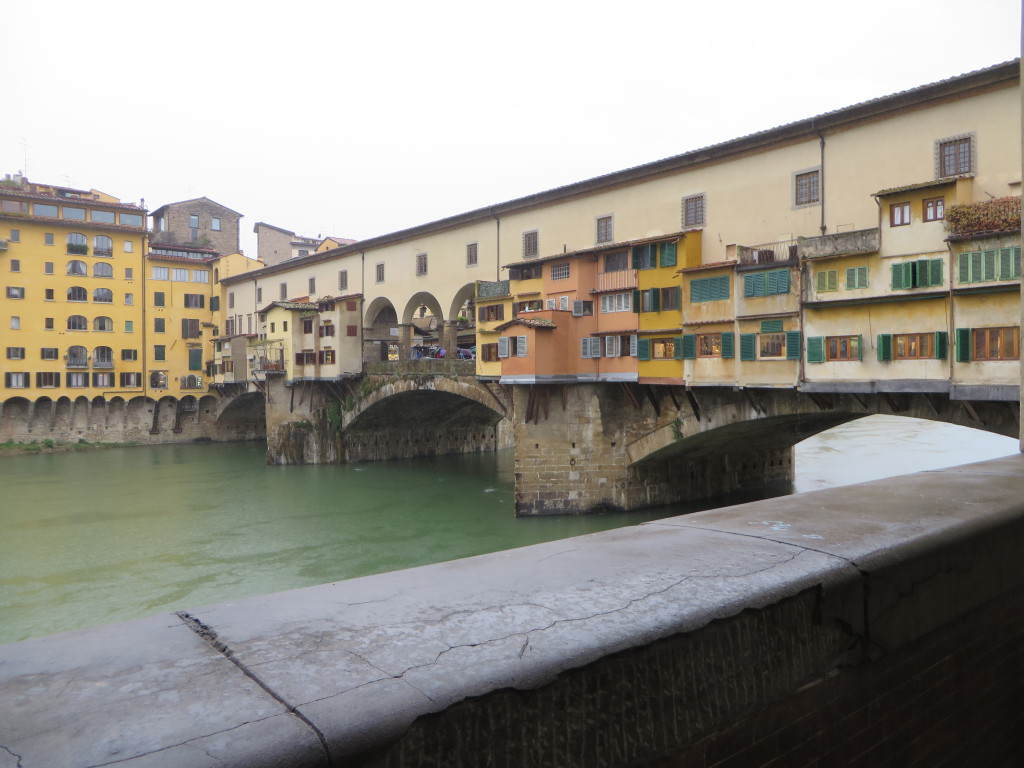 The Ponte Vecchio – view from the walkway

With artwork ranging from ancient times to the 1800’s, the Uffizi Gallery is not only a magnificent building, it’s an art lover’s paradise – especially if you are drawn to religious works and marble sculptures of men in various states of dress and poses. 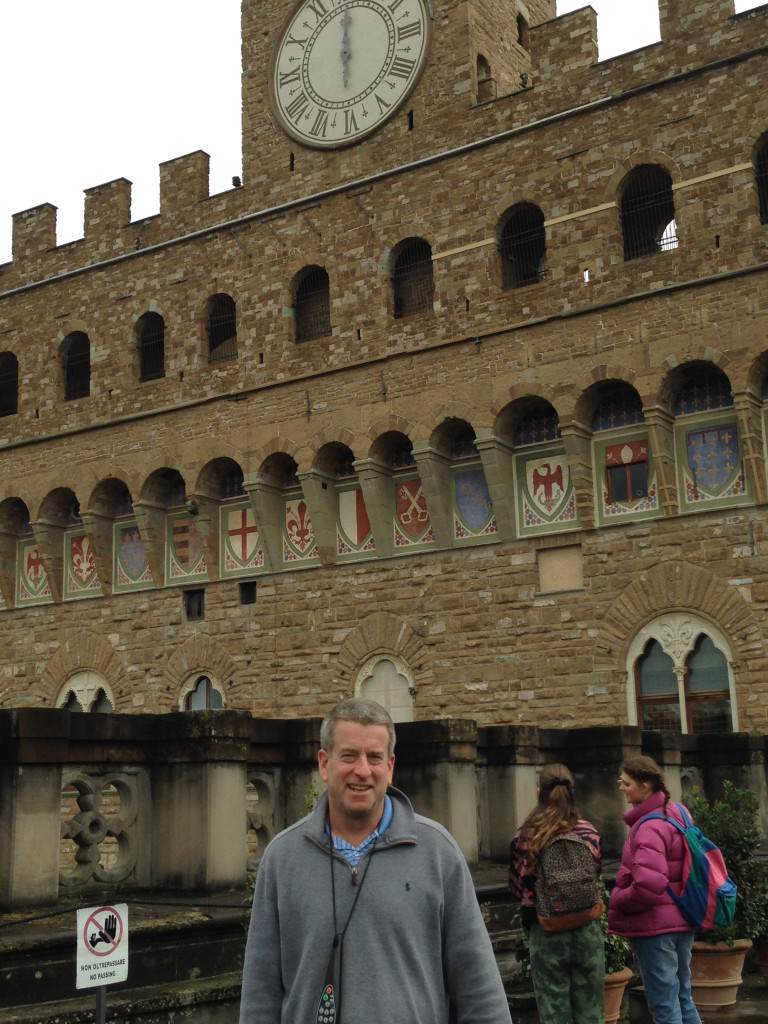 My husband under the Uffizi clock, just as it strikes 12:00.

Fun fact: Did you know that all of the earliest marble sculptures were originally painted in vibrant colors? The color was worn away hundreds of years ago due to environment and age.

But here’s where I’m going to say something it’s not easy for me to admit…I don’t love museums. Oh, how I wish I did. I can spend an hour, tops, looking at art – but then I’m done. I’m far more interested in people-watching!

When we were done at the Uffizi, we went to lunch to refuel and re-caffeinate (very important in Italy!). My meal of choice for most lunches was pasta pomodoro – the perfect thing to eat while sitting at a sidewalk cafe’.

Public Service Announcement: While I was in Italy, I was vigilant about only eating half of everything I was served. Even though the portions are far smaller than here in the U.S., I found it helped me to not feel too full and over-indulgent.

After lunch we made our way to Galleria dell’Accademia to see the magnificent statue of David. As I said earlier, I’m not a big fan of museums, but this piece of art stopped me in my tracks. I won’t bore you with adjectival descriptions, just a recommendation that if you have the chance, you must see this in person. 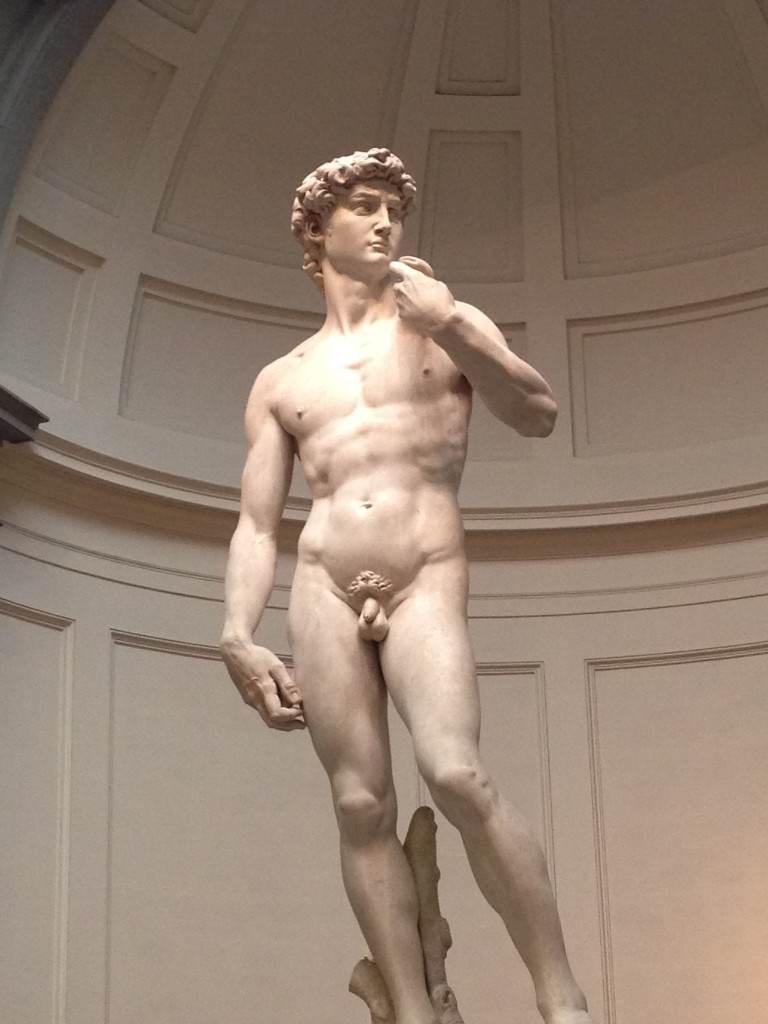 My illegal photo of David – taking pictures is prohibited, but everyone does it anyway. Notice the hands.

Fun fact: David’s hands are huge relative to the rest of his body. This is because the original plan was for him to be placed high above ground level. Also, it symbolizes that he is about ready to do battle. But I have to tell you, it was pretty shocking to me at first!

After David, we made our way back to our Hotel. Fortunately for me my husband has an incredible sense of direction, because I had no idea where we were going.

After a nice long nap we pulled our (still jetlagged) selves together and went to La Giostra, a restaurant recommended to us by our daughter. Though she told us the food literally brought her to tears (I’m thinking it might have also been a bit too much wine – it was during her semester abroad, after all), we weren’t sure what to expect. Thankfully her recommendation was spot-on, because the food, the atmosphere, the wine, the service…it was all absolutely delightful. I had my favorite dish of our trip, a seafood pasta, at La Giostra. 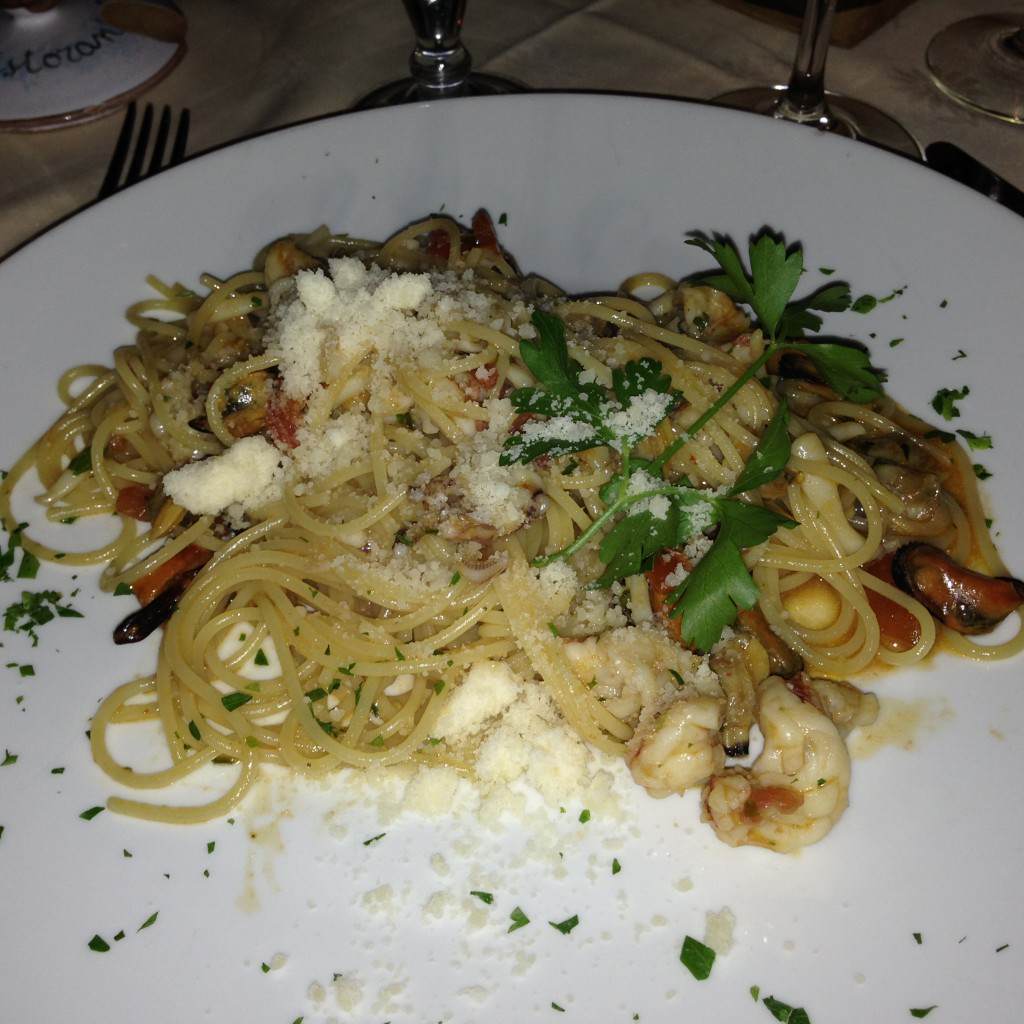 The seafood pasta at La Giostra – I took a bite before remembering to take the photo!

Fun fact: La Giostra means “carousel” in Italian, and the restaurant is located in what used to be a carousel builder’s studio.

And in an “it’s a small world” moment, a woman sitting at the table next to us who is from Birmingham, Alabama but now lives in Florence, grew up with my uncle’s wife.

Come back next week for part two of my trip to Italy…Tuscany!

Uffizi – pre-purchase tickets (a must!)

Thank you so much for the information. I am headed there the end of September.

Loved seeing all the details from your trip to Florence. It looks like you two had a well deserved fun and romantic time. Such a weird world that a person living in Florence sitting next to you grew up with your uncle's wife.

Happy Anniversary! I had to share your great post with my husband as we are planning a trip to Italy for our 20th next year. Can't wait for part 2.

Florence is like its own little majestic world! And are you lucky to have such a quality photo of DAVID!! One of the museum matrons nailed me as I was trying to focus the lens...and then she followed me around...lol

I loved the sidewalk markets! Even came home with two new pieces of red luggage! ha So glad you had the opportunity to visit Florence and that you enjoyed yourself!

Thank so much for sharing your trip with us!! Italy is on my list - can't wait to get there someday! Looking forward to your next post!! :-)